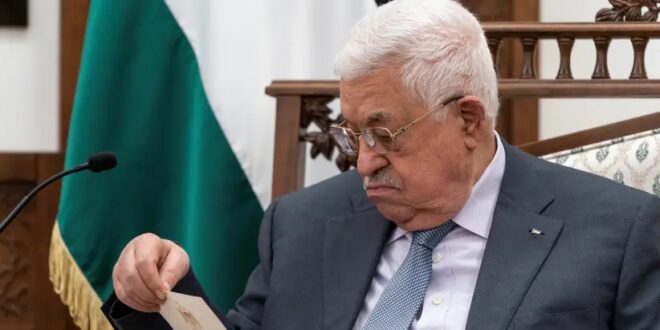 Palestinian leaders have renewed their threats to rescind all signed agreements with Israel, especially the Oslo Accords, saying they are also disappointed with the US administration’s “lack of interest” in the Israeli-Palestinian conflict.

Palestinian Authority officials have stepped up their rhetorical attacks on the Israeli government, a move that is threatening to end an apparent thaw in relations between the PA and Israel.

In recent weeks, a number of Israeli ministers and officials, including Defense Minister Benny Gantz, visited Ramallah, where they met with PA President Mahmoud Abbas and other Palestinian representatives.

Additionally, the PLO Committee for Interaction with Israeli Society has hosted several delegations of Israeli academics, writers, journalists, political activists and former government officials over the past few weeks, as part of an effort to encourage dialogue between the two sides.

On Sunday evening, Abbas chaired an emergency meeting of PLO and Fatah officials in Ramallah to discuss the latest developments surrounding the Palestinian issue and the Palestinians’ relations with Israel and the US.

The officials also discussed the severe financial crisis in the PA, after many Western donors stopped channeling funds to Ramallah over the past 18 months.

Ahead of the meeting, a number of senior PLO and Fatah officials demanded that the Palestinian leadership discuss the possibility of revoking PLO recognition of Israel, ending security ties between the Palestinian Security Forces and the IDF, and canceling all signed agreements with Israel.

The officials said that there was no reason why the Palestinian leadership should not implement previous recommendations by Palestinian bodies, including the PLO Central Council, to sever all ties with Israel unless it recognized an independent Palestinian state with east Jerusalem as its capital on the pre-1967 lines.

The Palestinian leadership briefly halted security coordination with Israel last year in protest of a since-shelved plan by the Israeli government to extend Israeli sovereignty to some parts of the West Bank.

One official accused the Israeli government of “waging war” on the Palestinians by approving new housing units for settlers in the West Bank, and classifying six NGOs as terrorist organizations.

“This government appears to be worse than the right-wing government of Benjamin Netanyahu,” said one official. “We will no longer be deceived by the positive rhetoric of some Israeli ministers and government officials.”

Azzam al-Ahmed, a senior member of the PLO and Fatah, said after the meeting that the Palestinian leadership has decided to dispatch envoys to several countries to urge them to pressure Israel to adhere to all international resolutions pertaining to the Israeli-Arab conflict.

Ahmed said that the envoys will also carry a warning that the Palestinian leadership will walk away from all signed agreements with Israel if the government fails to accept the two-state solution and implement the international resolutions.

“We will demand one democratic state if Israel does not commit to the two-state solution,” Ahmed told the PA’s Palestine TV. He also revealed that Abbas is planning to visit Moscow in the coming days for talks with Russian President Vladimir Putin on the latest developments in the region.

“Russia is an important friend of the Palestinian people,” the Palestinian official said. “We want the Russians to exert pressure on Israel to commit to the two-state solution.”

In a virtual speech before the UN General Assembly last month, Abbas threatened to revoke Palestinian recognition of Israel if it does not withdraw from the West Bank, Gaza Strip and east Jerusalem within a year.

Abbas also threatened to return to UN Security Council Resolution 181 related to the partition plan and endorse the one-state solution.

Some of the Palestinian officials who attended the meeting said they expressed deep disappointment with the US administration’s “foot-dragging” regarding the Israeli-Palestinian conflict.

At the meeting, Abbas called on the US to reopen the US consulate in Jerusalem that had served as an unofficial diplomatic mission to the Palestinians before it was shut by the administration of former president Donald Trump.

Abbas also called on the US to reopen the PLO diplomatic mission in Washington, which was also closed by the Trump administration, and to cancel all financial “sanctions” imposed on the Palestinians by the previous US administration.
Mahmoud al-Aloul, deputy chairman of Fatah, said the Palestinian leadership can no longer accept the continuation of the status quo.

“All options are on the table, including canceling the agreements signed with the occupation, revoking the [Palestinian] recognition of Israel and seeking the implementation of international resolutions to reach a just and comprehensive solution to the Palestinian issue,” al-Aloul told the PA’s Voice of Palestine radio station.