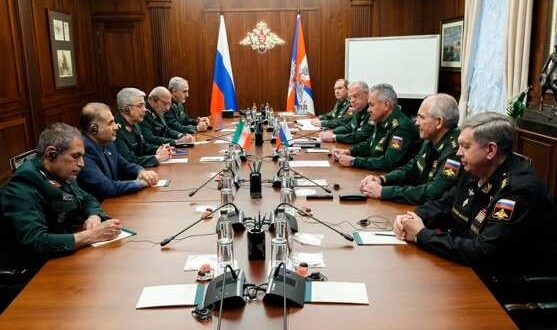 During a four-day visit to Russia, the head of the General Staff of the Armed Forces of Iran, Mohammad Hossein Bagheri, discussed with Russian Defense Minister Sergey Shoigu ways of strengthening military-technical cooperation between the two countries. Bagheri was particularly interested in new Russian hardware now that international restrictions on arms supplies to the Islamic Republic have expired. Bagheri termed defense interaction with Moscow unprecedentedly wide in scale, and explained that Iran at this stage is interested in the implementation of previously concluded agreements with Russia covering the supply of fighters, training aircraft and military helicopters.

Shoigu, in replying to his guest, envisioned the relationship in far less ambitious terms: “Our relations are developing very dynamically and are multifaceted, a vivid confirmation of this is our great joint struggle against international terrorism. We are ready to continue to make every effort to maintain the current pace of development of our relations.”

The Russian defense chief also emphasized the preferred areas of cooperation: “Moving in this direction, we can continue to do this work in different regions, taking into account that the situation is not getting easier. This is about Afghanistan and the threats that exist today from this region. This is drug trafficking and the emergence of ISIS (the organization is recognized terrorist and banned in Russia – ed.) on the territory of neighboring states, “Shoigu said.[2]

Prior to Bagheri’s arrival, Gevorg Mirzayan, a prolific columnist, Middle East expert and a professor at Russia’s Financial University wrote an article titled “What Prevents Russia and Iran from Becoming Full-fledged Allies” explaining why Russia is leery of such a relationship despite common interests. Mirzayan claimed that Iran had displayed bad faith by breaking contracts with Russia and turning to Western countries, and Moscow is still smarting over that experience. Secondly, Iran wants to use Russia as its spearhead against Turkey, but Russia has no interest in such a thankless role.

“The past few months have not gone so well for the Islamic Republic of Iran patch to put it mildly. Turkey is actively taking over in the South Caucasus, inciting nationalist unrest among ethnic Azeri citizens of Iran, and relocating Syrian fighters to the Iran’s northern borders (as if the problem of Israelis stationed in Azerbaijan and using the country for electronic reconnaissance and espionage operations against the Islamic Republic of Iran was not enough).

“The Iranians’ attempts to intimidate Ankara and Baku through military exercises came to nothing, as Erdogan and Aliyev are well aware that the Iranians themselves won’t dare to solve the problems by force. The situation in Iraq (which until recently was perceived almost as an Iranian vassal) is also very sorry, not so much as the result of the local Shiite nationalist Muqtada al-Sadr’s victory in the country’s parliamentary elections, but due to the grave defeat sustained by the main pro-Iranian party, whose total mandates in the parliament were reduced almost three-fold. Pro-Iranian forces claim that the elections were rigged and threaten almost an uprising. However, it’s questionable whether Iran itself is ready to sanction such an uprising, which will even further alienate an Iraqi population, tired of its powerful eastern neighbor’s domineering.

“Finally, on the American front, where Iran and the US conducting negotiations on the negotiations for resuscitating the nuclear deal, the situation is also complicated. Tehran’s demand to return to the status quo ante (i.e. to first lift all the US sanctions, after which Iran will start fulfilling its share of obligations on limiting the nuclear program development or temporarily freeze its sectors) did not encounter Western understanding. This is the case due to Iran’s own behavior, which for domestic political reasons drags out the renewal of the negotiation process (as a result of the elections the new executive authority takes a more anti-Western position than President Hassan Rouhani, who concluded the nuclear deal). And the Americans really do not like such procrastination.

“With each passing day, Iran continues to take actions that do not correspond to the agreement, in particular the country is increasing its stockpile of highly enriched uranium to 20%, even 60%, and accelerating the spinning of centrifuges,” said US Secretary of State Antony Blinken. According to the Secretary of State, “Iran is achieving too much progress in its nuclear program, which won’t be reversed by a simple return to the JCPOA.” Thus, the US is already hinting at its readiness to reconsider the military scenario for addressing the issue.

“Moscow views Iran’s difficulties with understanding and even a modicum of sympathy. Meanwhile, Moscow verbally supports Tehran in every possible way. “The situation around the Joint Comprehensive Plan of Action on Iran’s nuclear program has been discussed. It has been confirmed that a restoration of the nuclear deal in its original balanced format is the only correct way to ensure the rights and interests of the parties involved. The parties expressed a mutual readiness to resume talks on the JCPOA in Vienna as soon as possible,” reads the Russian Foreign Ministry’s official transcription of a telephone conversation between Sergei Lavrov and Iran’s Minister of Foreign Affairs, Hossein Amirabdollahian.

“However, the Iranians, to put it in the words of Ostap Bender [a fictional character in two novels by Ilya Ilf and Yevgeni Petrov] are not asking for instructions on how to run their lives, but for financial assistance, for real help in solving their problems, if not the Iraqi one, then at least the Turkish and American ones.

“At first glance, we [Russia] should help and not because we are partners with Iran is our country’s partner, with whom we are jointly solving Syria’s issues and are preparing to address the threats emanating from Afghanistan threats, but because Iranian problems are Russian problems too. For instance, for an entire year the Iranians have been trying to convince Moscow that Turkey is being too cocky in the Caucasus region.

“There is no need to even mention the confrontation with the US. The Americans recognize neither Iranian nor Russian sovereignty, nor the two countries’ right to live by their populations’ desires. As a part of its non-recognition policy, the US deploys the very same sanctions tool against both Russia and Iran. Therefore, it’s in the interests of the two states to demonstrate to the US the weakness of such a tool.

“However, on second glance, common interests are not the only prerequisite for two-sided cooperation. One also needs trust between the sides and an understanding that cooperation will bring dividends. And Russia lacks such understanding and trust.

“Subjective and objective reasons are behind the [Russian] feeling of Iranian unreliability. The subjective reasons were the conduct by the Iranian leadership after the sanctions were lifted from them under Obama. As thanks to Moscow for long years of support, Tehran promptly cancelled all or an absolute majority of contracts with Russian manufacturers and handed them over to Western firms to support economically the restoration of political relations. Life’s reality chastised Iran for its fickleness: after the sanctions were re-imposed at Trump’s behest, the Western firms froze contracts, leaving Iran without both the merchandise and the money it had spent. However, the dregs [of that experience] have remained with Moscow. And the Russian Federation, has no guarantees that Iran won’t do the same after the nuclear deal will be restored.

“Based on objective factors, it’s also quite obvious rather apparent that Iran will not avail Russia in the Turkish dimension, due at least to the factor of Iranian Azeris, whose pro-Turkic sentiments won’t allow Tehran (that fears internal unrest) to assume a firm position. It is no accident that during the Second Karabakh War Iranian diplomats were actively soliciting Russia to take unilateral action against Turkey, while representatives of Rahbar (the Supreme Leader of Iran) were publicly stating their support for Azerbaijan’s actions in the war.

“A strong feeling arises that the Iranians want to use Moscow as a ‘spearhead’ aimed at the enemies of the Islamic Republic. But why should Moscow play this role?”