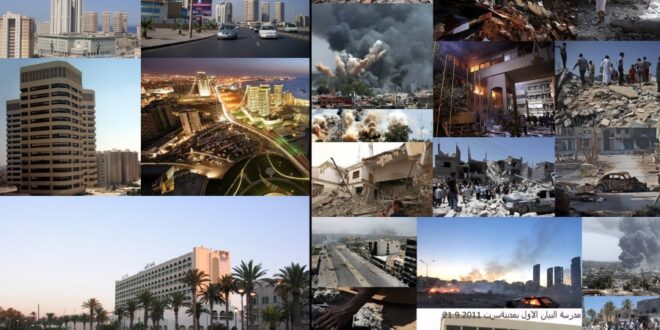 How the Western Leaders Destroyed the Muslim World: We, the People and Revival of Colonization

The Arab word’s a veritable mess. The cosmic leadership deficit, the absence of legitimate institutions, the lack of transparency, disrespect for human rights, abysmal regard for gender equality, and too much conspiratorial thinking make it impossible to come to terms with the magnitude of the problems. In short, this region will remain broken, angry, and dysfunctional until the leaders who purport to take responsibility for governing these unhappy lands get their proverbial acts together. And that’s … well, a generational enterprise at best, and I suspect something that will take a good deal longer. Aaron David Miller (“Where Have all the Arab States Gone” Foreign Policy: 4/14/2015)

After the US-led crusade in Afghanistan, it was Iraq, then Libya, followed by Syria and Yemen leading to Saudi Arabia under the guise of “war on terrorism.” The US Congress was powerful to sanction the 2003 bogus war against Iraq. The same fate could meet Saudi Arabia if it refuses to compensate the alleged victims of the 9/11 attacks.

The US and some of the West European nations have played central role in institutionalizing the authoritarian corruption across the oil producing Arab states. The new educated and thinking generations of Arabs must realize the inherent problems and make a navigational change and set priorities to detach the economy and politics from the oil fed thinking and consequential militarization and interdependency on the Western nations unto social and economic-political reconstruction of the Arab societies for a sustainable future. The discovery of oil was not a blessing in its totality but its manipulation for superfluous prosperity and economy could turn out to be a natural curse leading to a decadent culture and civilization. Time and history shall not wait for a navigational change in thinking and actions but new generation should be conscientiously powerful and skilled enough in time management to share new and moving vision and to plan strategies and actions for A NEW Arab world dedicated to informed and responsible people’s governance and living in harmony with the rest of the global community.

Robert Briffault, Professor at Cambridge University (The Making of Humanity, London, 1920). made the following historical observation:

“It was under the influence of Arabian and Moorish revival of culture and not in the fifteenth century, that the real Renaissance took place. Spain not Italy, was the cradle of the rebirth of Europe…It is highly probable that but for the Arabs modern European civilization would never have arisen at all; it is absolutely certain that but for them, it would not have assumed that character which has enabled it to transcend all previous phases of evolution. For although there is not a single aspect of European growth in which the decisive influence of Islamic culture is not traceable, nowhere is it so clear and momentous as in the genesis of that power which constitutes the paramount distinctive force of the modern world and the supreme source of its victory.

The global humanity is continuously oppressed, manipulated and victimized by the weapons of mass destruction – from thoughts to all kind of weaponry. Global peace, conflict management and security are neglected by those who were responsible for its protection and maintenance. Everything thinkable appears to be falling into dereliction and much wanton destruction to be reported as non-living statistic. Most leaders operate in a vicious circle of making statements, tweets and speculative wishful overtures as if the whole mankind was inept and inattentive to the catastrophic challenges of the day.

Good judgments seek honesty of purpose, courage and rational thinking. When the leaders talk about the emerging conflicts and human tragedies, they pretend as if none had ever happened before. As if they never opened the pages of history. History offers lessons to all generations all the time. Human perpetuated tyranny according to late Professor Howard Zinn is “tyranny.” Insanity has no alternative rationale. Look how the UNO leadership and most global politicians witness transgression, forcible displacement and killings of millions and millions across Syria, Iraq, Libya, Myanmar (Burma) and Yemen but do nothing except the fake UN-SC resolutions and dubious statements of crimes against humanity.

The victimized mankind shares a sense of disarray and loss of being part of the global humanity. A view from afar only asserts conspicuous example of inhumanity flourishing everywhere and seeing the proliferation of anarchy, violations of basic human rights and dignity and use of chemical weapons, and civilian massacres but nobody questions why this now after the Two World Wars? The world is changing but not fast enough for the authoritarian Arab rulers – fattish fed by the oil revenues and stupid and mindless in thoughts and behaviors if you view them in the real world of political actions and prevalent deplorable atrocities imposed on the Arab people. The affluent and oil enriched indulged in conspiracy to assume power and institutionalize corruption simply to maintain few tribal powerhouses favored by the ex-colonial masters managing the power centers from distance. Now, the Arab people have awakened after long slumber of complacency and disorder. The problem was well defined by Shakespeare “the destiny of peoples coincided with the destiny of their monarch and nobles.” The knowledge-based, information age has dismantled some of the illusory borders and demarcation of nobilities and has challenged to bridge the conflicting time zones between the palaces and the people with the internet, cell phones, face book, twitter and instant communication technologies.

“Washington’s enemy is an enemy that doesn’t exist…. it didn’t exist when Bin Laden was alive, it doesn’t exist now…. America is being attacked because of it’s foreign policy…because of the Saudi police-state, because of it’s presence on the Arabian Peninsula, because of it’s relationship with Israel…Israel as a country isn’t the problem. The leaders of the Jewish-American community in the United States who influence and corrupt our congress into supporting Israel when we have no interests there…. The truth is, American and Western foreign policy interests in the Middle East for 50 years have depended on the maintenance of tyranny – tyranny that gave us access to oil, tyranny that protected Israel and in the last 20 years, tyrannies that persecuted Islamists to protect us.”

Michael Scheuer, former Chief of the CIA Bin Laden Unit, “We are Fighting an Enemy that Doesn’t not Exist in a War that Doesn’t End.”

Arab geography is the by-production of European colonization. Historically, Arabs were nomadic people free to move and trade all over the Arabian Gulf Peninsula and beyond. British, French and Italian demarcated the national borders and extended superfluous nationalities to keep the Arab divided and defeated. While Islam offered the unity of One People – ‘One Ummah’, the Europeans indulged in massive cultural and political disruptive plans to ensure that Arabs remained fractured and would not re-emerge as One People again. They were used at will by the then superpowers (British and French) to fight the European national wars during the First and Second World Wars. Could history repeat itself as it happened during the French Revolution and Industrial Revolution that Arab people might rise over the agony of intolerable limits of lost freedom and bloody authoritarianism?

The degeneration of the Arab moral and intellectual culture is well in progress. They are divided and defeated. There are no wars for the Arabs to fight but they are fighting wars on several fronts without reason- known and unknown. The compelling realities across the beleaguered Arab world demand new thinking, new proactive visionary leadership, men of new ideas and plans to deal with unwarranted bombing of the civilian population, wholesale deaths and deliberate destruction of the Arab people and culture and millions of displaced refugees-nowhere to go.

The emerging crises clearly indicate the Western policies and practices aim to incapacitate the Arab intellectual hubs to think of a sustainable future. There seems to be no escape from the current volatile political crises, when Arab leaders act as if they had no knowledge of what massive deaths and destruction meant to contemporary rational thinkers. Temptation and compulsion of evil embedded in psychological factors of sectarian rivalries operate in Iraq, Syria, Yemen, Libya and Egypt to perpetuate in-house fear, death and destruction. After the end of WW2, across the Muslim world there were two major political problems of global importance. Palestine and Kashmir. Postwar Arab and Muslim leaders neglected the imperatives of these core issues and their failure enlarged the scope of other man-made problems to undermine the basic rights of freedom of the people of Palestine and Kashmir. Millions of Palestinian were evicted from their ancestral homes when state of Israel was established. Whereas Kashmir represents the failure of India and Pakistan to hold a UNO agreed plebiscite to facilitate the freedom of the people of Kashmir. After the unsettling Palestinian refugee situation, why are there several millions of more Syrian refugees across Western Europe? Who will deal with the pressing problems of life and death facing the Arab masses? Who will deal with restoration of peace, normalcy and conflict management? Do these leaders have any moral and intellectual capacity to extend security and sense of protection to the helpless millions of displaced refugees? Rationality is replaced by a perpetuated insanity. As it stands now, Arab leaders have no other thought and priority except to check the depleted oil prices, and count the dead bodies – soon they could be part of abstract statistic debated and defined by the American and Europeans warriors as to how the Arabs lost their national freedom, human dignity and oil pumping economic happiness. To reverse the naïve blunders for accidental change and to clarify a rational perspective for the future, this author in “Arab Leaders Waiting to Count the Dead Bodies” (https://www.countercurrents.org/khawaja050213.htm), offered the following insight and reminder to all concerned in the Arab world:

Once the Arabs were leaders in knowledge, creativity, science and human manifestation, progress and future-making – the Islamic civilization lasting for eight hundred years in Al-Andalusia- Spain. But when they replaced Islam – the power and core value of their advancements with petro-dollars transitory economic prosperity, they failed to think intelligently and fell in disgrace and lost what was gained over the centuries. They relied on Western mythologies of change and materialistic development which resulted in their self- geared anarchy, corruption, military defeats and disconnected authoritarianism. The Western strategists ran planned scams of economic prosperity to destroy the Arab culture with their own oil and their own money turning them redundant for the 21st century world. Today, the authoritarian Arab leaders are so irrational and cruel that they reject all voices of reason for political change and emancipation of people-oriented system of governance only to bring more deaths and destruction to their societies.

Post Views: 306
Previous Capitalism Is Not Your Friend
Next Ethiopia’s Civil War: Cutting a Deal to Stop the Bloodshed