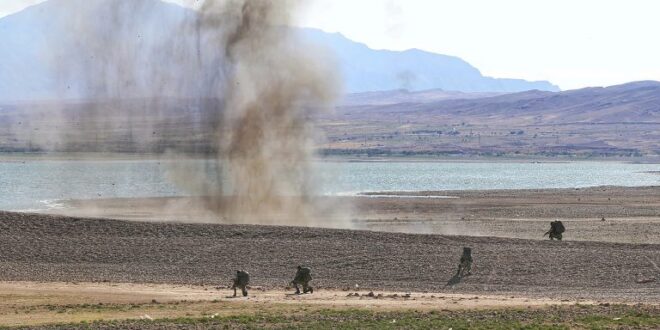 Tensions between Iran and Azerbaijan are aggravating – and at times benefitting regional powers.

Iran’s policy toward Azerbaijan has domestic implications for the former, because a large percentage of the Iranian population is of Azeri origin.

Iran has demonstrated that it is willing to act militarily, if necessary, to secure its interests in the Caucasus.

Tensions between Iran and Azerbaijan have opened the door for exploitation and competition between regional powers, particularly Turkey and Israel, Iran’s key rivals in the region. Even though the populations of both countries are predominantly Shia Muslim, Iran’s relations with neighboring Azerbaijan have always been fraught with acrimony. Iran is an Islamic Republic, whereas Azerbaijan is a secular, ex-Soviet state whose Turkic-speaking population views Iran as a threat. Azerbaijan’s politics, leadership, and foreign policy are of consistent concern to Tehran, because Azeri Turks, concentrated mainly in the oil-poor northwest of Iran (along the border with Azerbaijan), constitute about 25% of the Iranian population. Azeris in Iran have periodically challenged Iran’s government over economic and social discrimination and Iran’s policy toward Azerbaijan, particularly Iran’s support for Azerbaijan’s main rival, Armenia. Some Azeri nationalists in Iran have agitated for Azeri-inhabited areas of Iran to formally affiliate with Azerbaijan. During the 2020 war in which Azerbaijan recaptured the Nagorno-Karabakh territory that Armenia had captured in 1994, ethnic Azerbaijanis organized protests in support of the war in several cities in Iran. Azerbaijan resented Tehran’s perceived backing of Armenia during the 2020 conflict, despite Tehran’s public declarations of neutrality, and any modest aid it gave Armenia did not prevent the latter’s clear defeat.

Adding to Tehran’s concerns has been Azerbaijan’s close political ties to Iran’s regional rivals. Turkey, Azerbaijan’s key benefactor, competes with Iran for regional influence, including in Syria, where Iran has been pivotal to the survival of the regime of Bashar Al Assad. Despite a deterioration in U.S.-Turkey relations, Turkey remains a member of NATO and would be bound by treaty to act militarily against Iran in the event NATO came into direct conflict with Iran. Iran also accuses Azerbaijan of supporting Israel’s assertive posture against the Islamic Republic. Iranian officials have accused Azerbaijan of allowing Israel to use its territory to monitor Iran and to base covert operations against Iran’s nuclear facilities and personnel. There has been speculation, in Iran and more broadly, that Israel might use Azerbaijani air bases if Israeli leaders were to launch a strategic military strike on Iran’s nuclear facilities.

The 2020 Nagorno-Karabakh war—coupled with Baku’s extensive ties to Turkey and Israel—set the stage for the late summer 2021 eruption of tensions between Tehran and Baku. In the 2020 conflict, in which Azerbaijan prevailed in part as a result of supplies of armed drones from Turkey and Israel, a Russian-brokered ceasefire left Azerbaijan in control not only of Nagorno-Karabakh but also of roads through which Iran supplies fuel and other goods to Armenia. In mid-September, Baku imposed a tax on Iranian trucks using the roadways, and it detained two Iranian truck drivers entering the Nagorno-Karabakh region. When coupled with Azerbaijan’s ties to Turkey and Israel, Iranian leaders feared that Azerbaijan was moving to sever its land connection to Armenia. On September 12, Baku conducted military exercises with Pakistan and Turkey. On September 28, Azerbaijani President Ilham Aliyev, citing satellite, drone, and ground imagery, accused Iran of violating Azerbaijan’s sovereignty by hiding the identity of Iranian trucks heading to Armenia.

Perhaps deviating from its traditional cautious posture, on October 1, Tehran launched extensive military exercises on the seven hundred-kilometer Iran-Azerbaijan border, highlighting the depth of its concerns about Baku’s alignments. The exercises were clearly intended to be a show of strength because they involved large armored, mechanized, and infantry unit drills, rather than test new equipment. Moreover, the combat battalions remained deployed along the border even though the exercises had been completed. Analysts, including in Baku, assessed that Tehran’s main intent was to position the forces it might need in any armed conflict with Azerbaijan under the guise of a military drill. The mobilization suggested that, in contrast to Iran’s longstanding reticence to risk any war on Iranian soil, Tehran is willing to use force, if necessary, to secure its links to Armenia. Moreover, it clearly aims to ensure that outside powers, particularly Israel, cannot use Azerbaijan to pressure or attack Iran militarily.

Iranian leaders are wary of providing the United States and the European countries a justification for further economic and political pressure, or risking confrontation with Turkey. Iran therefore welcomed an opportunity to de-escalate tensions. In mid-October, following phone conversations between Azerbaijan Foreign Minister Jeyhun Bayramov and Iranian Foreign Minister Hossein Amir-Abdollahian, the two sides said they would resolve their diplomatic crisis through dialogue. According to Azerbaijan’s foreign ministry: “The Ministers stressed the importance of always respecting the principles of territorial integrity and sovereignty of the countries.” On October 24, Iran’s foreign minister stated that Iran-Azerbaijan relations would continue on the basis of “mutual respect.” Still, because regional powers Turkey and Israel, in particular, benefit from Azerbaijan’s wariness of Iran, it is a near certainty that tensions will flare again at some point. Any armed conflict in the Caucasus would only compound existing crises across neighboring regions, particularly given the escalating humanitarian and displacement crises in Afghanistan.