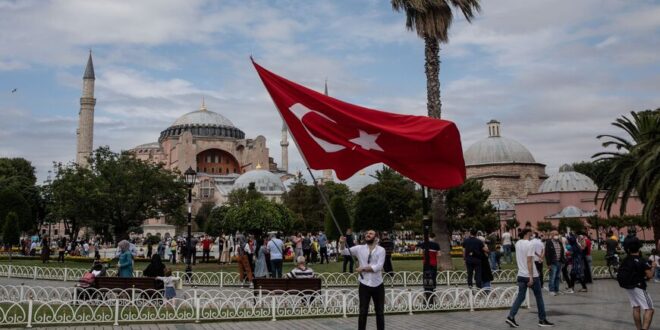 Turkey has ramped up military activity on the ground in Syria following a parliamentary extension of the government’s mandate to carry out cross-border operations. Yet, such an operation still seems unlikely without Washington and Moscow’s approval.

Turkish President Recep Tayyip Erdogan might be counting on nationalism to sidestep Turkey’s deepening economic and political troubles before the presidential elections in 2023. Ankara has stepped up its military presence in Syria for a potential new incursion, in parallel with the Turkish parliament’s extending the government’s mandate for military operations in Syria for another two years.

The main opposition CHP voted against the motion for the first time, alongside Turkey’s pro-Kurdish Peoples’ Democratic Party. Unlike the previous extensions for another year, the latest motion grants a 24-month term to the government — a move that both opposition parties argue is to benefit Erdogan’s election calculus.

The motion designates all Syrian regions with US-backed Syrian Kurdish groups, namely Syrian Democratic Forces (SDF) and People’s Protection Units (YPG) and their affiliates, as areas where threat of “terrorism escalates.” While Idlib is mainly controlled by Hayat Tahrir al-Sham, which Turkey designated as a terrorist group, Ankara deems it an area where stability needs to be maintained. The mandate, accordingly, effectively aims at Kurdish-held areas.

In addition to the parliamentary mandate, a potential operation would also require green lights from Moscow and Washington. But even without those approvals, Ankara has already mobilized its forces as if the operation was imminent.

According to pro-government media reports, commanders of the Turkish-backed Syrian rebel groups have been invited to Ankara and briefed on “tactics and strategies on a fourth military campaign in Syria” for some 35,000 troops advancing from two main flanks.

The four target areas are reportedly Tell Rifaat and Manbij in northern Aleppo and Ain Issa and Tal Tamer to the east of the Euphrates. Ankara is reportedly also considering extending the offensive to Kobani on the Turkish border, to cut off the connection between Qamishli and Manbij, and link areas controlled by Turkish-backed rebels — Peace Spring, where Ras al-Ain and Tell Abyad are located, and Euphrates Shield, where Jarablus, al Rai and Al Bab are located.

The incursion “is meant to seal more than two thirds of Turkey’s 910-kilometer (560-mile) frontier with Syria,” Bloomberg, reported citing an unidentified Turkish official. “It would aim to capture areas south of the town of Kobani, also known as Ayn al-Arab, to connect areas under its control west and east of the Euphrates river,” the report added.

Turkey has also ramped up its military presence in Marea where a missile attack killed two Turkish officers early October. The Turkish army dispatched three military reinforcements to the area over the past week, most recently Oct. 26, when the Turkish parliament extended the government’s mandate.

According to the Syrian Observatory for Human Rights, following the Sept. 29 Sochi summit between Erdogan and Russian leader Vladimir Putin, the number of military vehicles dispatched from Turkey to Syria has reached some 555. On Oct. 26, a military convoy of 30 to 50 vehicles crossed into Syria from Kafr Lusin village to reinforce the Turkish military observation posts in northern Idlib. The focal point appears to be Jabal Zawiya mountain, where a potential Syrian government offensive might try to take back the critical M4 highway.

Yet other military activity suggests a new Turkish operation. Turkey has been transferring armored vehicles, personnel carriers and heavy-duty machines to Tell Abyad since Oct 22. According to the Syrian daily al-Watan, Ankara and Turkish backed rebels have also been focusing on Tal Tamer. Opposition sources said the upcoming days will witness more reinforcements from opposition-held Euphrates Shield and Olive Branch regions to Tell Abyad and Ras al-Ain in Peace Spring regions.

Turkey’s third military operation in 2020, Operation Peace Spring, ended before the Turkish troops captured Ayn Issa and Tell Tamir, under ceasefire deals Ankara reached with Washington and Moscow. The recent dispatches to Tell Abyad have once again turned the heat on the Ain Issa.

Several positions in Tal Tamer have come under Turkish army’s fire in the past weeks. Similarly, Turkish troops and Turkish-backed rebels have been bombing critical positions connecting Idlib to Tell Rifaat, including predominantly-Shiite towns of Zehra and Nubbul.

Capturing Tell Rifaat has long been on Turkey’s agenda. Seizure of the town would open new fronts against the Kurds and the Syrian government forces, as well as the Iran-backed Shiite militias in Zehra and Nubbul.

Meanwhile, Russia’s air campaigns have expanded towards the Turkish border, and in addition to the reinforcements in Tell Rifaat and Minnig air base, additional Syrian government troops have been dispatched to several villages in the northern countryside of Aleppo including Tal Madiq and Tal Zawayan. Syrian government forces in northern Aleppo were reportedly put on high alert with staff leaves being cancelled.

Yet, despite the intense military activity on the ground, such an operation seems a distant prospect for Ankara before securing authorization from Russia and the United States. Reportedly, Turkey could remove some of its military observation posts along the south of the M4 highway in return for a Russian green light to use the Syrian air space.

Ankara also appears to have failed to reach an understanding with Washington. Erdogan is expected to discuss the issue with President Joe Biden in Glasgow on the sidelines of the Cop26 Climate Conference. In a phone call between Turkey’s Presidential Spokesperson and US national security advisor Jake Sullivan on Oct 23, Ibrahim Kalin stressed Turkey’s determination to fight all terror groups including YPG and the Islamic State.

External factors aside, the domestic outlook also appears unfavorable for Erdogan. In matters involving military considerations, the CHP has traditionally heeded signals from the general staff. Hence, the party’s veto is an important sign of unease within the establishment.