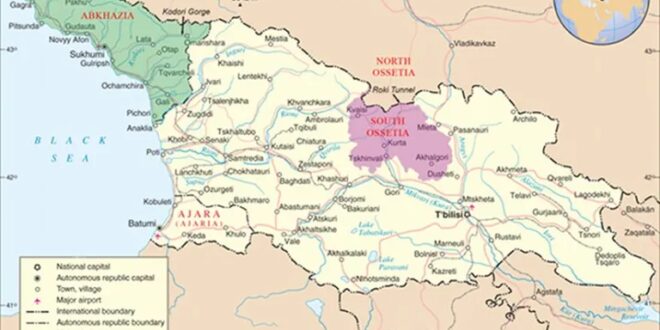 Geopolitics informs Russian attitude toward Abkhazia. It is both of benefit and curse for Abkhazian elites who aspire to a greater level of maneuverability not only from Tbilisi, but from Moscow as well. Russian investments might be beneficial economically, but they could be also laying the groundwork for a more troublesome scenario: de-facto merger with Russia.

Abkhazia is a special case in Russia’s separatist empire – a string of territories along Russia’s borders allowing Moscow to exert influence on neighboring states. The region has a vibrant political life where opposition can turn into a ruling power, advantages unseen in other separatist lands. Abkhaz nationalism is also much trickier than what we see in South Ossetia or Donbas. Unification with Russia is not even remotely discussed. Politicians in Sokhumi aspire to full-scale independence. They are more averse to foreigners buying into their lands and more sensitive to the interpretation of history.

Despite this marked difference, Abkhazia’s long-term perspectives are as bleak as that of other regions. Russian influence is as pervasive as elsewhere. Dependence on Moscow is as expansive as in other regions. These trends undermine any viable path toward true independence of the region. The real problem though is that Sokhumi does not have any other opportunity to buttress its aspirations.

In a series of agreements and political moves Moscow has managed to gain advantage in areas where Abkhaz resistance to Russian influence was fierce. For instance, in November 2020 Georgia’s Russian-occupied region of Abkhazia signed a 46-point agreement to create a unified socio-economic space with Moscow, though not many took note. While portrayed as a move to alleviate the territory’s economic troubles, the program marks a huge step toward eventual Russian annexation of Georgia’s region. For instance, in comparison with the military agreement signed in 2014 new provisions appear in the latest document. It includes stipulations for the sale of local real estate, among them a provision on dual citizenship allowing Russians to obtain Abkhaz passports. A string of laws will be introduced whereby Russian investors will be able to invest money into and buy majority shares in what remains valuable in Abkhazia.

The agreement also allows the Russians to buy into Abkhazia’s energy sector. Additionally, the Abkhaz will make legislative and administrative amendments according to the Russian law in social, economic, health, and political spheres. There is also a stipulation on simplification of law procedures for Russian investors.

While this may help a decrepit Abkhaz economy, greater harmonization with Russian laws lays the groundwork for a near-official merger with Russia. It is this dilemma between closer cooperation with Russia and deep fear of Russian intentions that haunts the Abkhazian elites. Indeed, Russian investments into the energy sector and land purchases means Abkhazia could be slowly losing its last vestiges of de-facto independence.

Control over Abkhazia gives Moscow several advantages. The region is arguably the most strategically located within Russia’s separatist empire. A passage from the North to the South Caucasus, the region is also famous for its harbors and military infrastructure. Control over it gives Russia capabilities to assess NATO/EU expansion into the region.

Russian plans in Abkhazia should also be seen within the context of Russia’s push to solidify its presence in the South Caucasus, especially in the aftermath of the second Nagorno-Karabakh war and the dispatch of Russia’s peacekeeping mission in the region. Economic inroads into Abkhazia also means a further distancing of other potential players such as the Tbilisi government and the collective West.
Using Weak Spots

Russia is using Abkhazia’s weak spots to its advantage. First is that the region has failed to gain wider recognition of its “independence.” Aside from Russia, only a few small states have so far recognized the region and the long-term prospect for increasing the number is dubious. In addition, the region is continually beset by deep economic problems and the forecast is negative since the EU, the US, and other global or regional actors avoid economic engagement with the region in support of the Georgian government. The official US policy upholds refusal of any financial assistance to countries supporting Abkhazia. Under these circumstances, the region’s economic outlook is unlikely to improve in the coming decades, further exacerbating the existing social tensions and an already large outflow of young adults. These long-term political and economic prospects push politicians in Sokhumi toward seeking greater engagement with Russia in exchange for concessions in the areas previously excluded from making major modifications. The 2020 agreement could be seen as a part of a long game played by Moscow.

Indeed, Russia is playing a long game in Abkhazia – time is on Moscow’s side. Pressure on Abkhazia has been building up gradually over the past couple of years. Russia was unhappy with the election of the current president Aslan Bzhania. The latter has been poisoned twice since 2019 and was even hospitalized in Moscow in a critical condition in April 2019. Bzhania was then poisoned a second time just before the 2020 presidential elections, giving rise to speculations on the Kremlin’s involvement and tensions between Bzhania and Moscow.

The problem for Moscow was that Bzhania’s vision for Abkhazia has not been compatible with the Kremlin’s interests in the South Caucasus. Direct negotiation with Tbilisi was always a taboo policy issue in Abkhazia. However, Bzhania has made statements that markedly differed from the traditional line.

Moscow is also discontent with the management of Russian financial aid in the region. Occasional statements and comments from Kremlin-linked Russian pundits indicate the essence of the problem: the Kremlin worries about the increasingly predatory economic behavior on part of the Abkhaz political elite. Few efforts are made to improve the economic and security situation in the region, as shown by a growing number of murders of Russian nationals over the past several years. Every level of the Abkhaz administration demonstrates persistent and widespread corruption. Russian politicians have also voiced objections to the consistent Abkhaz government’s refusal to allow Russian citizens to purchase land. The prospect of land sales has occasionally caused outbursts of public protests in Sokhumi and constitutes a further dividing line between the separatist regime and its patron.

As a result, despite Abkhazia’s special place in Russia’s separatist empire, the region is as closely linked to Moscow as any other separatist space. Long-term prospects are bleak as potential investment could come only from Russia. Greater Russian economic presence brings risks of losing the land to Russian businesses – a troubled scenario for Sokhumi which unlike other separatist regions always avoided talks of merging with Russia.

The Shifting Political Hierarchy In The North Caucasus

Since the collapse of the Soviet Union, the South Caucasus has been unable to find …