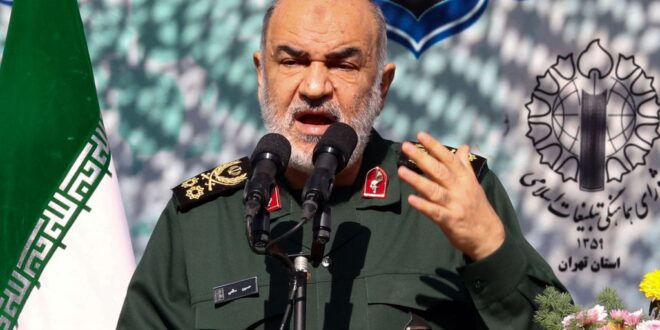 Major-General Hossein Salami, chief of Iran’s Islamic Revolutionary Guard Corps (IRGC) and keynote speaker in this year’s ceremonies, even claims that the US has already lost its global leadership position while a trio made of China, Russia and Iran is emerging as the new arbiter of human destiny.

Not responding [to an attack by Israel] would be a sign of strategic weakness and could encourage a fresh wave of domestic rebellion. Responding, on the other hand, could lead to a full-scale war for which the Islamic Republic is far from prepared.

What Biden does next could prove decisive.

If he surrenders too easily, he will re-energize Tehran’s old demons. If, on the other hand, he opts for empty huffing and puffing, he may miss a chance to help those who strive for regime change in Tehran.

What do you do when you want to do something and yet you feel embarrassed about doing it?

This is the question that the “Supreme Guide” of the Islamic Republic of Iran, Ayatollah Ali Khamenei, faced this week as he wondered how to deal with one of his annual rituals celebrating the seizure of the US Embassy in Tehran and the holding of American diplomats as hostages on November 4, 1979.

During the eight-year tenure of the “New York Boys” under President Hassan Rouhani, the ritual had shed some of its harsher aspects and eventually been reduced to a symbolic gathering at the site of the former US embassy and the shooting of some footage for state-owned television.

In the past two years, many of the highlights of the annual ritual had faded into oblivion.

The annual “A World without America” symposium, attended for decades by professional anti-Americans from all over the world (including the US itself), was scripted out of the program.

The usual suspects such as Louis Farrakhan, Oliver Stone, Sean Penn and other self-loathing Americans were no longer invited to make the pilgrimage to Tehran. Nor were Iranian readers graced with another translation of Noam Chomsky’s latest hate-America rants.

The conference on creating an entirely “black” state in Mississippi in southern US was also shelved.

Also gone was “The End of Israel” seminar that brought together Holocaust-deniers from across the globe and the accompanying international anti-Semitic cartoons exhibition.

Although the “New York Boys” included dozens of “students” who had raided the embassy and held the hostages, by the end of 2020, some observers expected the whole ritual to be sent to the archives.

However, with “New York Boys” kicked into the shadows, at least for now, the “new revolutionary team” under President Dr. Ayatollah Ebrahim Raisi was expected to revive the ritual in its full blood-curdling splendor.

Surprisingly, however, not only this has not happened, but the new team seems to have opted for further lowering the profile of the annual ritual.

This is partly done by trying to attach other labels to the November 4 events that were supposed to mark “the humiliation of the American Great Satan”.

One new label for the events is “the anniversary of the sending into exile of Imam Khomeini” in 1964, even though that happened a calendar day later. Another label now added is “the day the Shah massacred primary and secondary school children” in 1976, although no such thing ever happened.

It is clear that the “new revolutionary team” is as anxious to tone down the regime’s rabid anti-Americanism as were the “New York Boys”.

The question is: why?

After all, the “new revolutionary team” built its narrative partly on the claim that the “New York Boys” had abandoned Khomeini’s jihad against “The Great Satan” in exchange for empty promises by then President Barack Obama.

One explanation, offered by some apologists of the “new revolutionary team”, including the daily Kayhan, is that the “Great Satan” has already been massively weakened and, as illustrated by cut-and-run in Afghanistan, is already on the run.

Major-General Hossein Salami, chief of Iran’s Islamic Revolutionary Guard Corps (IRGC) and keynote speaker in this year’s ceremonies, even claims that the US has already lost its global leadership position while a trio made of China, Russia and Iran is emerging as the new arbiter of human destiny.

According to Ayatollah Taeb, the IRGC’s politico-religious commissar, the US is now like a dead donkey that needs not be flogged.

However, this type of braggadocio from the Khomeinist elites often hides their fears.

In this context, the first fear is that the Biden administration may not be as keen on undoing former President Donald Trump’s “maximum pressure” policy that, according to an Islamic Plan Organization report in Tehran, has driven the Islamic Republic to the edge of bankruptcy.

Another fear is that President Joe Biden, even if he wanted, may not be able to undo enough of the sanctions to let the Islamic Republic bounce back. After all, removing most of the sanctions would require approval by the US Congress, something that Biden cannot take for granted. And, yet, Iranian Foreign Ministry spokesman Khatib-Zadeh says Iran will not recommit to its promises in the Obama “nuclear deal” unless the US “first removes all sanctions.”

Another fear is that Biden may give Israel the green light for “limited but decisive action” against Iran’s nuclear sites.

Such action would force the regime to cross a red line it has observed for four decades by responding in a meaningful way to military action against it.

In 1988, Khomeini refused to cross that line to respond to a massive attack by the US on the IRGC’s positions in Iran’s southern waters. For the past five years, Khamenei has refused to respond to countless Israeli attacks on Iranian positions in Syria that have claimed the lives of over 5,000 Iranian military personnel and their Afghan, Iraqi, Syrian, Pakistani and Lebanese mercenaries.

However, a direct attack on Iran’s nuclear installations won’t be easy to hide. Not responding would be a sign of strategic weakness and could encourage a fresh wave of domestic rebellion. Responding, on the other hand, could lead to a full-scale war for which the Islamic Republic is far from prepared.

Yet another fear is that the “Great Satan” may have recruited the Taliban in Afghanistan for the purpose of opening a new front against the Islamic Republic in the east. In 1995-1996, Khamenei backed out of a confrontation with the Taliban, despite the fact that they had brutally executed a number of Iranian diplomats and journalists, for fear of “walking into that swamp”. Despite recent deadly attacks on Shiite mosques in Afghanistan, he has also refused to say a harsh word against the Taliban.

The Khomeinist regime has always been “strong” in picking low-hanging fruits as in Lebanon and Yemen or where it can play Robin to a strong Batman, as is the case in Syria under Russian leadership.

Having said all that, at the risk of being accused of optimism, the regime’s decision to tone down the “embassy raid ritual” may have more mundane reasons.

For the first time none of the “students” involved in that criminal show holds a key position in the regime. Also, the soberer heads in the regime may have realized that crude anti-Americanism has brought them nothing but diplomatic isolation, economic decline and a repulsive image.

What Biden does next could prove decisive.

If he surrenders too easily, he will re-energize Tehran’s old demons. If, on the other hand, he opts for empty huffing and puffing, he may miss a chance to help those who strive for regime change in Tehran.