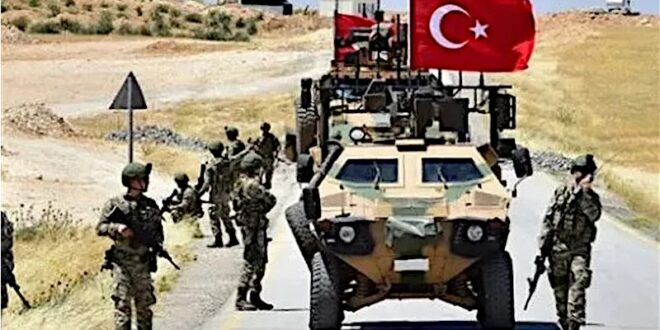 Pro-government Turkish media outlets last week reported that preparations are underway for a new set of military operations in Syria. A parliamentary motion to authorize the government to continue sending troops abroad was tabled last month and easily approved.

Previous motions approved a one-year mandate for such operations, but this time it was done for a period of two years. This may be because the government is forecasting harder times ahead, when the mandate may not be renewed as a result of declining public support for the ruling party.

Turkey already has a strong military presence in four areas inside Syria: In the northwestern province of Afrin as a result of Operation Olive Branch; the Operation Euphrates Shield area in Al-Bab; territory to the east of the Euphrates river captured in Operation Peace Spring; and several observation posts in Idlib. It is now eyeing up three more areas: Manbij and Tell Rifaat in Aleppo Governorate, and further land to the east of the Euphrates.

Although Turkey continues to keep its eye on Manbij, there are four parties that would not be happy to see this town occupied by Turkey: The US, Russia, the Syrian government and the Kurds. After the collapse of Daesh’s resistance in Manbij in 2016, Turkey insistently asked the US to expel Kurdish fighters from the town. Washington promised several times to meet Turkey’s request but failed to do so because the leading role in the expulsion of Daesh from the town was played by the Kurdish fighters of the People’s Protection Units, which make up the bulk of the Syrian Democratic Forces, and the US did not want to antagonize them. Turkey threatened to strike the Kurdish fighters in March 2018 but had to refrain because of opposition from both the US and Russia.

The second area where Turkey wants to expand its control is Tell Rifaat, which is also controlled by the Kurdish fighters of the SDF. On Friday last week, the Turkish media published a detailed report about the anti-tank and anti-personnel land mines laid by SDF fighters on the Turkish army’s possible approach routes.

The third area is the corridor along the Turkish-Syrian border east of the Euphrates. Turkey was initially planning to occupy a 40 km-wide corridor, running from Tell Abyad all the way to the Iraqi border, but this met stiff objections from all quarters. The Syrian government said it would fight the Turkish army; NATO offered to patrol the border instead; and then-US President Donald Trump sent a letter to Recep Tayyip Erdogan using a tone unheard of in correspondence between heads of state — “don’t be a fool,” he said in the letter.

Eventually, Erdogan and Russian President Vladimir Putin agreed in October 2019 to establish a 30 km-wide safe area between Tell Abyad and Ras Al-Ain, to be patrolled by Syrian and Russian soldiers. The remainder of the corridor was to be reduced to 10 km and jointly patrolled by Turkish and Russian soldiers. This arrangement has worked more or less satisfactorily, but Turkey now wants to occupy two more strategically important points — Ain Issa and Tell Tamr — further to the south, where the Kurdish fighters of the SDF control the oil wells.

Despite these preparations, there are reasons to believe that such a military operation might not be imminent. One is the turbulent relations between Turkey and the US. Erdogan last week held a meeting with US counterpart Joe Biden on the margins of the G20 summit in Rome. The two leaders listed the outstanding issues between them without necessarily trying to sort them out. The only concrete outcome of the meeting was the formation of a joint mechanism to discuss the outstanding issues on a technical level.

On his way back from the summit, Erdogan used a moderate narrative in his briefing with journalists, which suggests he wants to avoid a confrontation with Washington, be it in Syria or anywhere else. Furthermore, the US is heavily pressing Turkey to deactivate the S-400 air defense system it purchased from Russia. The EU is also squeezing Ankara on the Eastern Mediterranean issues.

Another reason for caution is the attitude of the Syrian government. Damascus is on its way to reoccupying its seat in the Arab League. There has also been a thaw in its relations with the Gulf countries and the international community has acquiesced to the idea of Bashar Assad’s continued presidency.

If Turkey does carry out one or more of the military operations that seem to be on the agenda, it will probably be aimed at boosting popular support among the nationalist-minded segments of the electorate ahead of the next general election, which is scheduled for 2023. Governments sometimes make decisions that may contribute to their political survival but are against the national interests of their people.