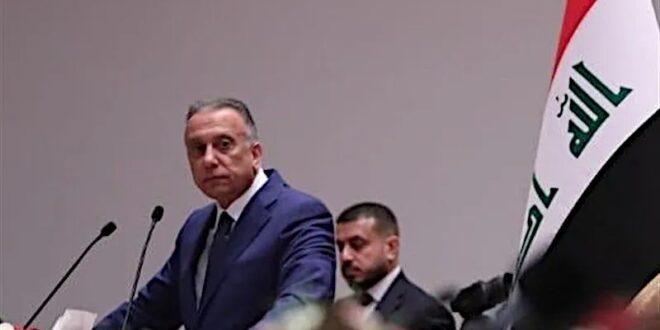 The daring attempt on the life of Iraqi Prime Minister Mustafa Al-Kadhimi early on Sunday at his residence in Baghdad’s heavily fortified Green Zone should not come as a surprise. As Al-Kadhimi himself said a few hours later, the culprits are known. For weeks, following the announcement of the early results of last month’s legislative elections, the pro-Iran militias and parties that had suffered significant losses claimed fraud and demanded that the outcome be overturned or a manual count implemented. But that was not what triggered Sunday’s attack.

The hard-line heads of the pro-Iran Popular Mobilization Units factions, running as the Fatah alliance, made direct threats to Al-Kadhimi and members of the Independent High Electoral Commission. The PMU’s Hadi Al-Amiri rejected the election results as fabricated, while the leader of Asa’ib Ahl Al-Haq, Qais Al-Khazali, threatened to use force as the only way to change the outcome. The alliance has a dozen or more other factions, including Kata’ib Hezbollah, a militant group that may have been complicit in carrying out Sunday’s attack.

Three explosive-laden drones were used in the assault; two were shot down, while one managed to strike Al-Kadhimi’s residence. The drones came from the east, according to security reports, pointing to Iran either directly or indirectly. Even though Al-Kadhimi survived the attack with minor injuries, the message was clear: It was meant to disrupt Iraq’s fledgling democratic process — one that is plagued by ethno-sectarian divisions, a controversial quota system and the invisible hand of Tehran’s Quds Force. Despite its numerous deficiencies, zealot pro-Iran militias wanted to manipulate the system to their own interests. And when Iraqi voters had another say, they stepped in to overturn the results.

What happened in Baghdad on Sunday morning was tantamount to a military coup. Pro-Iran militias, whose followers had barricaded the Green Zone for days to protest the outcome of the elections, believed they could intimidate Al-Kadhimi at first, and then eliminate him to hijack the political process. It was political suicide.

What is shocking is that, a few days after the initial election results were announced, former Prime Ministers Haider Abadi and Nouri Al-Maliki, joined by moderate cleric Ammar Al-Hakim and others, tried to form an alliance that would derail the verdict. The head of the largest bloc, nationalist Shiite cleric Muqtada Al-Sadr, refused to join them. They are now seen as having provoked an even deeper crisis for Iraq.

Al-Kadhimi is a nonpartisan Iraqi nationalist who has sought to keep his country neutral in the ongoing US-Iran showdown. His aim is to distance Iraq from Iran and take the country back into the Arab fold, which is anathema to the pro-Iran proxies.

With all fingers pointing to Iran, it was interesting that Quds Force commander Brig. Gen. Esmail Ghaani met with Iranian-backed militias and officials in Iraq hours after the assassination attempt. He was quick to head to Baghdad to try and restrain the very forces Tehran had unleashed. While Iran, among other countries, had condemned the assassination attempt, it is difficult to exonerate it from participating directly or indirectly in the crime.

The incident is a watershed in critical ties between Iran and its Iraqi proxies on the one hand and between Tehran and Baghdad on the other. Iran is playing a dangerous game in Iraq; one that is about to upset all its winnings since the US invasion of 2003 that toppled the regime of Saddam Hussein. It is the only regional power that is able to supply drones to its proxies, which have used them to frequently attack US bases in Iraq.

Ghaani’s arrival sends a worrying message: That some pro-Iran Iraqi militias are getting out of control. The blame will have to be laid on Tehran directly. By supporting rogue factions and supplying them with such critical weapons, it now stands as the main suspect in Sunday’s plot.

Al-Kadhimi now has few choices if he is to survive politically and keep his country from sinking into a dark chapter of political assassinations and possible civil war. He must find a way to neutralize and contain the PMU and other militant groups that are subservient to Iran. It is a bold challenge that may fail. The entire region is sick and tired of Iran’s meddling and its disruptive regional agenda. The coming days and weeks will be crucial for Iraq and any move the prime minister makes will be met with a fierce reaction. His success or otherwise in taking on the pro-Iran militias will determine the future of Iraq as a sovereign country.