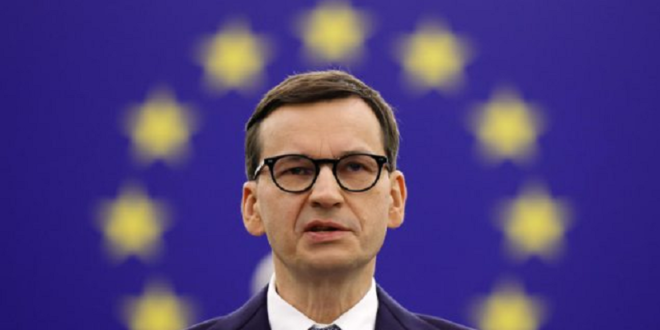 Morawiecki ran up against a European ‘wall of resistance’ of infuriated MEPs, who accused him of lying and attempting to dismantle the very structure of the EU. To BIRN, they also laid out their fears for the future.

Polish Prime Minister Mateusz Morawiecki came to office promising to be an effective interlocutor with Brussels. And, indeed, over the last four years he helped negotiate the EU’s multi-annual budget and agreed an energy transition towards a sustainable future. Recently, however, his approach has become much more antagonistic.

This turn in tone followed the ruling on October 7 by Poland’s Constitutional Tribunal, a puppet court of the right-wing Law and Justice (PiS) government, which questioned the founding principles of the EU legal order – namely, that EU law has primacy over national law and all rulings by the Court of Justice of the European Union (CJEU) are binding on all member states.

Morawiecki went to the European Parliament on October 19, where he delivered a speech that escalated the war of words between Warsaw and Brussels over the rule of law, claiming the CJEU was responsible for a “creeping revolution” that is undermining Poland’s sovereignty.

Morawiecki’s speech did not go down well. In fact, the prime minister achieved the opposite effect of the one he wanted, with members of the European Parliament (MEP) adopting a tough declaration condemning the Polish government and demanding sanctions from the European Commission. Not only was this declaration unprecedented, it was widely endorsed by 502 MEPs in favour and only 153 siding with Poland.

Morawiecki ended that week attending the European Council summit. On the margins of that get-together, he met with Marine Le Pen, leader of the French far-right National Rally and a presidential hopeful. The picture of the two of them shaking hands went viral in Poland and France, signalling as it did the possibility that a far-right grouping of national parties could be taking shape in the bloc.

Finally, on October 24, the Financial Times published an interview with Morawiecki, during which he used the language of war. According to Morawiecki, there is “gun to our head”, and this gun is being held by the European Commission, which is withholding Poland’s slice of the EU’s mammoth 750-billion-euro coronavirus Recovery Fund, worth almost 24 billion euros in grants plus another 12 billion euros in loans.

If the European Commission starts World War III by withholding these funds, “we are going to defend our rights with any weapons which are at our disposal,” Morawiecki said.

Making sense of it

So far, Morawiecki’s hardball tactics and tough-sounding language have failed to achieve any tangible results, though his offensive has definitely re-shaped the debate on the issue of Polish compliance with EU values. I was in Strasbourg to attend the plenary session at which he spoke and I talked with MEPs about the seriousness of the situation.

Juan Fernando Lopez Aguilar is a senior Spanish MEP (Spanish Socialist Worker’s Party), who chairs the influential LIBE committee that deals with, among other topics, the rule of law. “We were prepared for Morawiecki’s lies,” Aguilar told me over dinner. “This is a game of survival for our Union, this is an existential challenge. If we don’t face it, we’ll just cease to exist.”

Many other MEPs agreed with such an assessment that, as the Economist put it: “The problem is not that Poland is trying to leave the EU; the problem is that it intends to stay.”

Sandro Gozi, a former Italian MP who is now an MEP for the joint Liste Renaissance of Emmanuel Macron’s La République en Marche, is one of the leaders of the federal movement in the EU, the Renew Europe Group. According to Gozi, Morawiecki sounded “as if it was the beginning of an election campaign” – a view backed by many Polish opposition MEPs.

Gozi called Morawiecki’s words “nonsense”. “He was saying that we are blackmailing Poland. It does not make sense. When you join a club and play by the rules of that club, you enjoy the privileges of being a member. But suddenly, when one day you say, ‘well, mates, I don’t care about the rules of the club’, then this club has the right to react. This is not blackmail; this is about respect for the rule of law,” he said.

Ryszard Czarnecki, an MEP from Morawiecki’s PiS party and one of the longest-serving MEPs from Poland, offered some balance to the criticism from his colleagues. “The accusation is the prime minister spoke to his people? Because when we continue to talk to Poles, PiS keeps on winning elections, seven times in a row now,” he said.

For Czarnecki, it was an honest debate. “Some things might hurt, there are no taboos in the family,” he said.

Bernard Guetta, a French geopolitical guru and MEP with the Renew Europe Group, said he is an old friend of Poland after once serving as the Le Monde correspondent in Warsaw in the early 1980s. For him, Morawiecki’s offensive was merely a smokescreen. The issues are not about the supremacy of law, Guetta said, but rather “he does not know what to say about the most important issue”, which is Poland’s breaking of the rule of law.

“It will not be easy to balance out what Morawiecki and [PiS leader] Jaroslaw Kaczynski say. They will find many supporters in Europe – in Austria, France, Italy and Sweden. It will be an important and difficult debate, but we need to talk about it. What kind of Europe do we want – a Europe of nations or a political Europe?” asks Guetta.

Poland’s internal politics matter. Over the summer, the Polish government lost several MPs in the Polish parliament (Sejm) and an important ally in the coalition, Jaroslaw Gowin. “The arrangements in the government have changed and now the prime minister wants to be on the front line, because if he is not on the front line, he will not be at all,” pointed out Jan Olbrycht, another long-serving Polish MEP from the opposition Civic Platform party.

Polish daily Gazeta Wyborcza reported that during the European Council meeting, Morawiecki told his colleagues in the room that he did not have a majority in the Sejm to push through an act reforming the Supreme Court and dissolving the disciplinary chamber – two key demands of the CJEU – because a group of MPs close to hardline Justice Minister Zbigniew Ziobro opposed such reforms.

On October 27, the CJEU ordered Poland pay a record fine of 1 million euros a day until its July ruling concerning the suspension of activities of the disciplinary chamber is respected.

Vlado Bilcik, a Slovak MEP of the TOGETHER – Civic Democracy party, said he appreciated the lively debate, which “brought life back to Strasbourg” after all the doom and gloom of the pandemic. At the same time, he stressed the gravity of the situation.

“What’s the game? It’s about the survival of the entire European project. It’s about the rules, about trust, about keeping commitments. If the institutions of our member states start to be challenged – and by such a great and important country as Poland – then the whole project is under threat.”

Bilcik studied at Oxford in the 1990s and sees many parallels with Brexit. “There were already attacks against the Union, against European law – and those happened two decades before the exit.”

The heckling by PiS MEPs during the Strasbourg plenary also reminded others of the debates during the time of Nigel Farage and his UK Independence Party, which Olbrycht warned “is not a good sign for Poland”.

Sandro Gozi said that if Brussels gave in and applied Morawiecki’s logic, it would turn the EU into a supermarket of values. “You go to the store and choose fish or meat, rice or pasta. Morawiecki says, ‘I like it, and I don’t like it anymore’, and tomorrow he can say, ‘I don’t like it and I will adopt a national law that will be in opposition to European law’. Then what?”

Terry Reintke, a young and high profile Green MEP from Germany, argued that “financial pressure works” and cited the recent example of several Polish regions that repealed motions declaring their provinces “LGBT-free zones”, after it became apparent that they were set to lose billions in euros of EU funds.

Reintke also stressed that the EU’s goal is not to punish ordinary Poles, the ultimate recipients of EU funds. “We have to look for ways to circumvent the central government and directly allocate funds to, for example, the regions.”

This seems like a popular strategy, yet the regions are meant to be beneficiaries of only 30 per cent of the grants and loans from the coronavirus recovery fund, with the rest allocated through the central government.

Ultimately, Reintke estimated that 80 per cent of the European Parliament wants to avoid a Polexit, but if the Polish government continues on this path, it could happen par hassard, by chance.

“That would be much more regrettable than Brexit, because it might happen against the will of the Polish people,” she said.