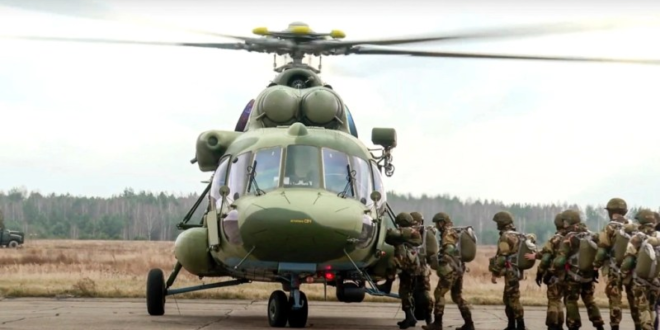 Admit nothing, deny everything, blame NATO and the West. That seems to be the Russian playbook under Vladimir Putin. The Russians have been massing troops on the Ukrainian border since spring. Many troops still remain in the region. Now, Russia is reinforcing them covertly as many experts believe that Moscow may be planning on making another move into Ukraine.

Russia and Belarus are also conducting large-scale exercises on the border with Poland as Moscow continues to act increasingly more aggressively in the region.

Some analysts accuse Putin and Belarusian leader Alexander Lukashenko, of orchestrating forced migrant crossings into Poland as a form of hybrid warfare against the European Union and NATO.

Other analysts believe that the U.S. and NATO’s actions in Ukraine have resulted in a “red line” for Putin and have forced his hand. But it should be noted that it was Russia that seized Crimea in 2014 while supporting Russian-aligned “separatist fighters.”

During an airborne exercise with Belarus, two Russian paratroopers died after their chutes collided and became entangled. Both were too close to the ground to deploy their reserve parachutes.

While Russia characterized the Belarusian operation as a way to assess the combat readiness of its airborne forces, Belarus had a different take, stating that it was a snap drill conducted by Russia as a “threat response system.”

Belarusian Defense Minister Viktor Khrenin said to the state media that Poland was the aggressor.

“It seems that our neighbors, particularly Poland, are ready to unleash a conflict seeking to involve Europe as part of solving their domestic political problems and problems in relations within the EU.”

He was referring to the actions taken by Poland, Lithuania, and Latvia which have been beefing up the troops along their borders with Belarus to try to stop record numbers of migrants crossing their borders. They have accused Lukashenko of manufacturing the migrant moves in reprisal of the EU imposing sanctions on Belarus for last year’s rigged elections.

“Russia doesn’t threaten anyone,” Peskov said, omitting the fact that they seized Ukrainian territory in 2014. “The movement of troops on our territory shouldn’t be a cause for anyone’s concern.”

Lukashenko denied that he was initiating the migrant flow west while admitting at the same time that his actions were a “reaction” against the West.

“We are not blackmailing anyone with illegal immigration,” he said back in August. “We’re not threatening anyone. But you have put us in such circumstances that we are forced to react. And we’re reacting.”

The Russians are angry that Ukraine wants to join NATO as a means to protect itself from Russian aggression. Defense Secretary Lloyd Austin recently visited Kyiv and said that Ukraine “has a right to decide its own future foreign policy,” and the U.S. will “continue to do everything we can to support Ukraine’s efforts to develop the capability to defend itself.” Putin reacted to Secretary Austin’s comments.

Several days later Putin issued a threat while claiming that the West was escalating tensions. He stated that for Ukraine, “formal NATO membership may never happen, but a military expansion on the territory is already underway, and this really poses a threat to the Russian Federation, we are aware of this.”

On Monday, Maxar, a commercial satellite company, posted pictures of the Russian military buildup showing the extent of Russian armored and artillery units massing on the Belarusian border. Politico, quoting Janes Defense, said that “equipment from Russia’s 4th Tank Division has been moved to areas around Bryansk and Kursk close to Ukraine’s northern border. The units are equipped with T-80U main battle tanks and self-propelled artillery.”

The Pentagon has thus far claimed to be in the dark regarding Russian intentions. Army General Mark Milley, chairman of the joint chiefs of staff, said on Wednesday that the U.S. doesn’t know what to make of the Russian moves. “We’ve seen this before… What does this mean? We don’t know yet, too early to tell,” Milley said.