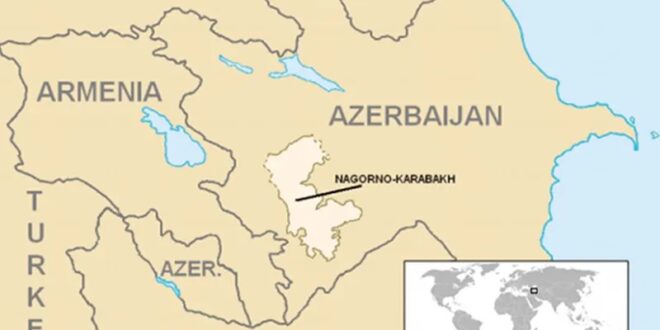 While no one is watching, the social and economic geography in the South Caucasus is continuing swiftly to evolve. Signal among these developments, indeed its driving force, is the rebuilding of the Karabakh region following the expulsion of occupying military forces from the Republic of Armenia, or under its direct control, which had been there for 30 years. The development has deep implications for the geopolitics of the broader region.

Danger still exists from Armenian irregular forces that continue to operate from the Azerbaijani territories where Russian peacekeeping troops are located. At the same time, there are periodic attempts to infiltrate special-operations teams from the body of Armenia proper into the newly liberated lands.

So far the headline story, but far from the only one, in the redevelopment of the Karabakh region is the opening of a new international airport in Fuzuli, a city that became a ghost town after its Azerbaijani population was driven out following its capture in August 1993 by Armenian forces who destroyed its civilian infrastructure.

It happens that the Azerbaijani army was able to retake important areas of Fuzuli district in 1994, although not the city itself. The development of non-occupied Fuzuli distinct since 1994 is an indicator of what to expect not only for Fuzuli city but for the whole of the de-occupied territories, once they are de-mined from the vast amounts of ordnance implanted by Armenian forces. This procedure is complicated by Yerevan’s general refusal to turn the requisite maps over to Baku. In one case where they did so, for the city of Aghdam, it was determined by inspection that these maps were only about 25 percent accurate.

Making a very rough calculation based on Azerbaijan’s population growth of 42 percent over three decades, from 7.02 million in 1989 to 9.98 million in 2019, these figures indicate that proportionally the old Fuzuli district should be able to support almost 128,000 Azerbaijanis, or indeed more, given the now-planned economic development there.

It is estimated that in the mid-1990s 40,000 Azerbaijanis had returned already to those areas of Fuzuli district not under Armenian military control, where they have thrived. This established demographic and economic base, an advantage that most of the de-occupied administrative districts do not enjoy, will facilitate the further development of Fuzuli city and the rest of Fuzuli district.

Azerbaijan is building two more airports in the formerly occupied territories, in Zangilan and Lachin districts. Construction of Zangilan International Airport began in May 2021 and will be completed next year. These three airports will go far to re-integrate the region economically back into Azerbaijan. It is planned to create industrial zones adjacent to the airports. Private Turkish companies have already started to construct an agropark in Zangilan district.

Thus, it is planned that the new airports will also become foci for modern logistics and transportation centres. The airports and their associated infrastructure will strengthen the region’s own security and connectivity by linking important new highways there, already under construction. New highways have already been finished that link major Karabakh cities, in the mountains, to the country’s eastern plain.

The catastrophe of the contamination of the de-occupied territories by land mines is becoming more widely recognized. Estimates made in 1998 supposed about 100,000 mines in the occupied territories. However. the mine maps provided for the city of Aghdam alone on 12 June 2021 showed no fewer than 97,000 mines. Official Baku believes that the occupying Armenian forces sowed no fewer than a million mines throughout the territories over the course of 30 years.

The United Kingdom has provided US$677,000 to Azerbaijan for de-mining activities via the United Nations Development program. France has donated US$473,000 directly to Azerbaijan for the same purpose. The United States has recently pledged US$500,000. Other countries have stepped up by providing trained personnel as well as funding.

Unfortunately Canada has not been among them, despite its having once vaunted itself with pride for having promoted and motivated the 1997 signature of the so-called “Ottawa Treaty” (full title: Convention on the Prohibition of the Use, Stockpiling, Production and Transfer of Anti-Personnel Land Mines and Their Destruction), which entered into force in 1999.

Azerbaijan’s deputy foreign minister Elnur Mammadov has told the International Court of Justice (ICJ) that Armenian forces continue to lay landmines in a “campaign of ethnic cleansing and incitement to violence against Azerbaijanis [that] is ongoing” and which have killed or injured “at least” 106 Azerbaijanis, including 65 civilians as of the middle of last month. Azerbaijan has applied to the ICJ for an order to Armenia to hand over maps showing the location of land mines in the liberated territories.

Even if it takes a decade to clear the mines, the economic development of the liberated territories is not being delayed. Baku is dedicating already in 2021 $1.5 billion dollars for the restoration of these territories. Similar figures may be foreseen for the future. This sum is not a great burden on the country’s state budget, which estimated an oil price of $45 per barrel; this price has risen to over $80 lately, with further increases likely.

The results of these investments will not only transform the territories themselves. The broad rebuilding of the infrastructure, including international links, will equally transform the geostrategic map of the whole South Caucasus region and beyond.