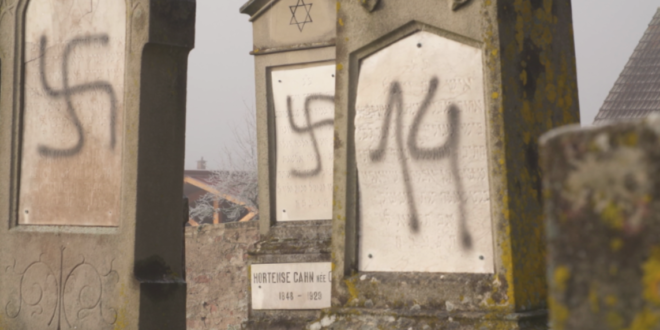 Last month, Austrian police made a remarkable discovery. In a raid on a house in the town of Baden, they found an arsenal of weapons and 1,200 kilograms of ammunition — as well as Nazi paraphernalia and a large amount of gunpowder.

Altogether some 50 weapons, including submachine guns and pump-action rifles, were seized. According to a police statement, the house belonged to a 53-year-old man who is “suspected of national socialist Nazi activities,” including sharing numerous files on Internet forums.

Interior Minister Karl Nehammer said of the raid: “The consistent action against right-wing extremism is not only part of the historical responsibility, but also a clear advocacy of our democratic coexistence in Austria.”

It wasn’t the first action against alleged neo-Nazis in Austria this year. In July, police seized automatic weapons and hand grenades in coordinated raids against a biker gang whose leader planned to establish a “militia of the respectable” that would “overturn the system.”

Support for Nazism is a criminal offense in Austria. The most prominent neo-Nazi figure is Gottfried Kuessel, who was sentenced to a nine-year jail term in 2013 for propagating Nazism online. It was his second conviction.

Bernhard Weidinger, who studies the far right at the Documentation Archive of the Austrian Resistance in Vienna, says that the criminalization of Nazi ideology has ensured that it is neither particularly strong nor organized.
“But what we do have is a very high frequency of weapons finds,” he told CNN.

Austrian neo-Nazi activists frequently connect with similar groups in Germany, according to authorities, because they perceive themselves as part of a greater German Reich. After the seizure of another arsenal of weapons late in 2020, Interior Minister Nehammer spoke of links between the five arrested individuals and far right cells in Germany, as well as connections with organized crime and drug trafficking.

In Austria, as elsewhere in Europe, the neo-Nazi scene includes virulent strains of both anti-Semitism and anti-Muslim racism.

In January this year, an Austrian rapper by the name of Mr Bond was arrested and charged with “producing and broadcasting Nazi ideas and incitement to hatred.” One of his neo-Nazi songs was used by a man as he live streamed a deadly attack on a synagogue in Germany in 2019.

In Austria, 12% of people aged 18 to 34 said they had never heard of the Holocaust. Austria also had the highest number of people in the survey — four out of 10 adults — who said they knew “just a little” about the Holocaust. And a third of Austrians (32%) said Jewish people have too much influence on business and finance around the world, echoing a long-standing anti-Semitic trope.

The findings came from a ComRes survey for CNN of 7,092 adults online in seven countries between September 7 and September 20, 2018. Data was weighted to be representative of each country based on age, gender and region.
Austria is grappling with the legacy of anti-Semitism in other ways. For almost a decade, a statue in Vienna has been at the center of that troubled history. It is of Karl Lueger, the city’s mayor at the beginning of the 20th century. Lueger exploited anti-Jewish feeling in his bid for office, emphasizing Christian and Germanic supremacy, and was much admired by Adolf Hitler.

The bronze statue, four meters high, has been defaced but still stands in a prominent position in a Vienna square. City authorities decided this month that it would remain in place but be set in context.

One group that took up the cause of protecting the statue was the Identitäre Bewegung Österreich (IBO) — the Austrian branch of a European movement that describes itself as Identitarian. Its leader, Martin Sellner, visited the statue after it was daubed with the word “Shame.”

Sellner has become a leading light in the Identitarian movement which opposes mass migration and wants Europe to have a homogenic white and Christian identity. They see this identity being sold out by political elites committed to multiculturalism.

Austrian authorities prosecuted him and 16 others using anti-Mafia laws in 2018, accusing them of hate speech and criminal association. After a high-profile trial they were acquitted.

More damaging for the Identitarians in Austria was the revelation that they had received a donation from the man who carried out the attacks on mosques in Christchurch, New Zealand, in 2019, and that Sellner had been in touch with him.

Sellner said in a video statement that he had nothing to do with the attack and said the money would be given to charity. Even so, Bernhard Weidinger told CNN, the connection seriously damaged the IBO in the eyes of much of the public.

Analysts make a distinction between traditional neo-Nazis — whose activities are based on violence and crime — and the emerging Identitarian groups, which are political. Besides Sellner and the IBO in Austria, they include Génération Identitaire in France and the Neue Rechte (New Right) in Germany.

However, both the Identitarians and neo-Nazi ideologists have taken advantage of the conspiracy theories that flourished with the QAnon movement and protests against vaccination policies during the Covid-19 pandemic. Sellner has said that such movements should be exploited for the only issue that truly matters: resisting mass migration.
In Vienna, Gottfried Kuessel — now out of jail — and others previously associated with neo-Nazism joined marches against lockdown.

Weidinger says it’s notable that they also appear to have attracted a younger generation — people in their twenties — to join them. They have also begun to organize their own protest for the first time in many years, he told CNN.

Nearly 40,000 people attended a Berlin rally in August last year to protest against lockdown but also against the “deep state.” The event was notable for the number of far-right groups that joined in (such as the German Reichsburger movement) and for its adulation of then US President Donald Trump.

In a video message, Sellner told the protesters they could mobilize a “broad, patriotic mass” to fight the “grand strategy” of global elites. Members of the Reichsburger group tried to force their way into the parliament, a symbolic act meant to recall the Nazis’ burning of the Reichstag.

In both Germany and Austria, the more extreme factions speak of “Day X” — an apocalyptic fantasy when democratic institutions will collapse in a tide of violence and a neo-Nazi state will be born.

It was a persistent theme on the Telegram channel of Nordkreuz, a German group of far-right extremists that included police officers and former soldiers. Another such group was Revolution Chemnitz, which planned an attack designed to accelerate “a turning point in history.”

There is some ideological overlap between Identitarian groups and Europe’s established right-wing parties, such as the Freedom Party in Austria, the National Rally (formerly the National Front) in France, and Matteo Salvini’s Northern League in Italy.

In July, 16 far-right parties signed up to a statement on the future of Europe, warning that “European nations should be based on tradition, respect for the culture and history of European states, respect for Europe’s Judeo-Christian heritage and the common values that unite our nations.”

Lena Floerl (R), 25, takes part in a “vigil of shame” on October 6, 2020, to prevent city authorities removing graffiti from the statue of Karl Lueger, a former mayor of Vienna famous for his anti-Semitic views.

“In a time when Europe is facing a serious demographic crisis with low birth rates and ageing population, pro-family policy making should be an answer instead of mass immigration,” they said.

Sellner and other Identitarians have used almost exactly the same language, warning of the “Great Replacement” in which white Europeans are swamped by a tide of migration.

Bernhard Weidinger says that the Identitarians offer what he describes as “critical solidarity” to the Freedom Party (FPO), which dominates the right in Austria. He says that now the Freedom Party is in opposition in Austria after a spell in a government coalition it has tilted further right, depriving the IBO of territory of its own.

Indeed, some FPO members have had an ambivalent relationship with the neo-Nazi fringe in Austria. In 2018, a senior official, Udo Landbauer, resigned his position because of a previous association with a group accused of being neo-Nazis. Landbauer denied knowing about anti-Semitic and neo-Nazi content in a book published by the group.

The European far-right is a fractured environment, where political activism and calls to violence overlap, and groups grow and morph quickly. Much of it is online or underground, but it has been given new impetus — in both Europe and America — by lockdowns, vaccination mandates and an epidemic of conspiracy theories.

Where it coalesces — at least in spirit — is on the issues of cultural identity and migration, which groups such as the Austrian IBO regard as an imminent existential threat.

In June this year, the Austrian parliament passed a law banning the symbols of the IBO and another group, “The Austrians,” essentially conflating them with terror groups.

The IBO responded on its website that: “Austria is thus partially and purposefully abolishing democracy for two patriotic groups. The autocratic censors will not get rid of us.”