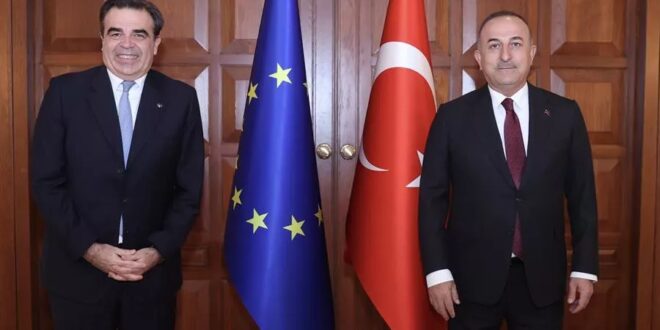 European Union Commission Vice President Margaritis Schinas, responsible for coordinating migration and security policies, has held two-day long talks in Ankara, his fourth stop in a tour of partner countries key to putting a stop to the “instrumentalization of migrants by the Belarussian regime and [which] aims to further reinforce the overall cooperation on migration and security.”

Schinas would convey the message that migration management is a shared responsibility and joint priority both for the European Union and for Turkey, his office said ahead of the meetings in Ankara.

Schinas had been to the U.A.E., Lebanon and Iraq in the past few days, as part of the tour.

“We discussed with Schinas irregular migration issues in our region, including in Belarus,” Foreign Minister Mevlüt Çavuşoğlu tweeted on Nov. 18 after his meeting with Schinas.

Since August, the EU countries bordering Belarus — Lithuania, Latvia, and Poland — have reported a dramatically growing number of irregular crossings. More than 8,000 people have tried to enter the bloc via the Belarus-EU border in 2021, up sharply from just 150 last year.

According to the bloc, the Belarusian regime reaches out to potential travelers by seemingly official channels, through diplomatic representations or travel agencies, and invites them to Belarus by offering visas and guiding them to the EU border.

NATO and the EU consider Belarus’ approach towards migrants a hybrid attack meant to destabilize and undermine security in the European countries through non-military means.

EU officials reached out last week to a range of airlines and aviation authorities to ask for cooperation in stopping the migration crisis at the bloc’s borders with Belarus.

Turkey was among the countries that took action, stopping citizens of Syria, Iraq, and Yemen from buying plane tickets to Belarus.