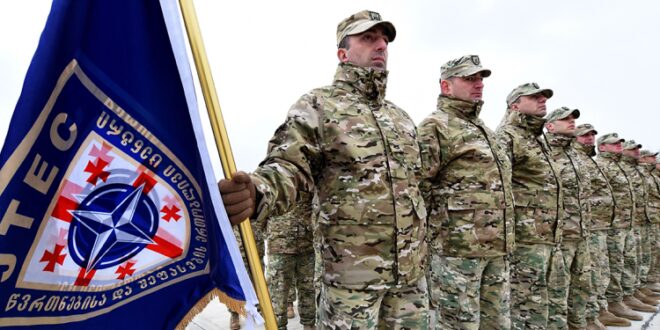 Georgia and NATO: The case for a 2.0 partnership

Under the Biden administration, calls for a NATO Black Sea strategy have amplified. A gamechanger for the much-needed regional strategy is Georgia’s and Ukraine’s path to membership. NATO’s strategic reassessment, to be finalized next year at the Madrid summit in June, will likely fall short of granting Ukraine and Georgia the desired Membership Action Plan. Nevertheless, NATO’s strategic reassessment offers the opportunity of a partnership upgrade for one or both countries. In Georgia’s case, how much of an upgrade this will be depends on the efforts of three actors. First and foremost, it’s in the hands of Tbilisi to come up with proposals for and requests to the Alliance. Second, the United States is the only key ally Black Sea countries have that can bring the region’s complex security challenges to NATO’s forefront. Finally, for an upgraded partnership (and the implicit heightened threat perception vis-à-vis Russia) the support of the other NATO members will be crucial, and allies will need to make a convincing case why it is urgent to take action now.

U.S. Defense Secretary Lloyd Austin’s recent Black Sea tour was a first for a Pentagon chief. America’s regional allies Georgia, Romania, and Ukraine have been urging the West for over a decade to build Black Sea deterrence against Russian aggression. Most of their warnings fell on deaf ears. It was only in 2016 that NATO established the Forward Presence to strengthen defenses against Russia, and even then the Black Sea received a comparatively symbolic NATO commitment. Both Ukraine and Georgia, as non-NATO members, remain almost completely exposed to Russian military aggression.

Georgia has made constant efforts with measurable success to reform its military and smooth its integration process into NATO. In return, only a handful of allies have actively supported Tbilisi’s military reform and acquisition process. The United States stands out with over $200 million invested since 2015 into Georgia’s defense reform and since 2018 in the provision of (limited) lethal equipment. The United States has also supported Georgia with regular military presence, such as the recent visit of U.S. warships to the port of Batumi. But Georgia needs significantly more support from its allies. The country is vulnerable to a Russian attack by land, sea, and air. Political and military signaling from the Kremlin suggests that another Black Sea war is a real possibility. Over the last few years, Moscow has invaded Ukraine, militarized the Black Sea region, and denied access to the Azov Sea. Russia’s reply to Austin’s Black Sea trip has been the breaking of diplomatic ties with NATO. There is nothing to suggest Russia is ceasing its aggression and militarization in the Black Sea, and Georgia, given its size and geographic position, is the most vulnerable U.S. ally in the region.

At the NATO level, significant leeway exists to build up its partnership with Georgia. Recently, Javier Colomina was named NATO’s new special representative for the Caucasus, pointing to opportunities for increased NATO attention on Georgia. So far, NATO-Georgia cooperation has been limited in scope. In 2014 the Substantial NATO-Georgia Package was adopted, enabling the creation of a joint NATO-Georgia training center in 2015 and a yearly NATO-Georgia military exercise since 2016. At the Warsaw summit in 2016, NATO allies opened up the possibility of a Georgia trust fund and promised support for the development of its air defense and air surveillance capabilities. Such a trust fund can be built to include a clear set of projects (with a focus on necessary defense acquisitions) and adopted at the 2022 NATO Madrid summit.

What can Tbilisi do now?

This sharpens the attention on Georgia’s government and the Ministry of Defense (MoD). Tbilisi has an impressive track record in terms of contributions to NATO and political messaging vis-à-vis its Western partners, calling for increased security support for the Black Sea region and the Caucasus. To achieve a comprehensively upgraded partnership with NATO, Georgia should refine its strategy toward the Alliance in two ways. First, it should design, based on its defense procurement priorities, a set of essential acquisition programs needed to build defenses against a hybrid Russian attack. So far, Georgia’s MoD has focused on air defense systems (procured from Israel) and unmanned aerial vehicles. Air-to-surface defense systems (based on lessons learnt from Ukraine) and early warning systems are some of the programs the Georgian MoD can put forth when seeking support in the NATO trust fund framework.

Second, Tbilisi needs to target a number of key NATO allies to increase their financial, and most importantly, political support for both its national and broader Black Sea regional security. France and Germany have been the most reluctant about Georgia’s and Ukraine’s NATO integration and their military presence in support of NATO deterrence efforts in the Black Sea has been limited. In preparation for the next NATO summit — and the language the Alliance’s new strategy will adopt regarding Russia — it will be critical to rally Berlin’s and Paris’ support for a greater NATO presence in the Black Sea. Without their support Georgia’s partnership upgrade has little chance of real success.

Poland and Romania are the other two NATO allies that can make a real contribution to a NATO-Georgia partnership 2.0. Both Warsaw and Bucharest have been staunch Georgia and Black Sea security supporters and have valuable experience in the military reform process and in consolidating their defense in light of Russian aggression. Increased Georgian-Polish and Georgian-Romanian political and military cooperation would serve as substantial arguments in favor of Georgia’s strategic role for the Alliance.

Facing complex vulnerabilities, Georgia has no choice but to build up its own defense and rally political support for national and regional security. Its strongest and most supportive ally unquestionably remains the United States. Defense Secretary Austin’s visit has highlighted just that. Without staunch U.S. support for Black Sea deterrence and Georgia’s national security, an upgraded NATO partnership is unthinkable. It is now in the hands of Georgia’s government to rally further NATO support and secure an upgraded partnership, vital for its defense.

Post Views: 191
Previous The EU’s Strategic Compass: Preparing to navigate MENA “with less US”
Next The migration crisis on the EU’s eastern border: A new transit route from the MENA region?