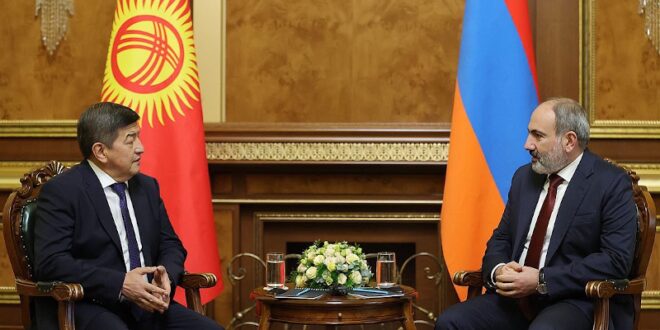 Prime Minister Nikol Pashinyan on Thursday, November 18 met with his Kyrgyz counterpart Akylbek Japarov, who has arrived in Armenia to take part in the session of the Eurasian Intergovernmental Council on November 18-19.

Pashinyan congratulated Japarov on his appointment to the post of Chairman of the Cabinet of Ministers of the Kyrgyz Republic and expressed hope that the two countries will be able to develop bilateral relations and intensify trade and economic ties.

According to a statement from Pashinyan’s office, Japarov agreed that the volume of trade turnover between the two countries can be described as “insignificant”.

Armenia and Kyrgyzstan are both members of the Eurasian Economic Union, the Collective Security Treat Organization and the Commonwealth of Independent States.

Post Views: 100
Previous Violent Flare-Up A Reminder Of Need For Long-Term Azerbaijan-Armenia Peace – OpEd
Next The Road To Fascism – OpEd