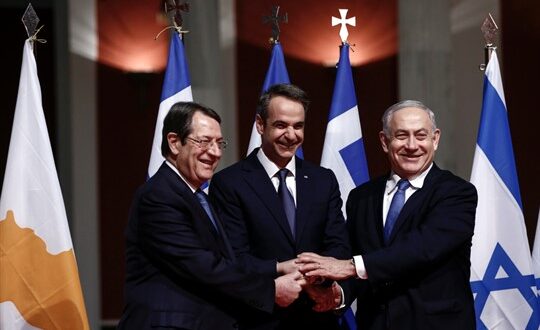 Developments in the Eastern Mediterranean region are unfolding at a breakneck pace. Blink an eye and one is bound to miss a new multilateral initiative, an impressive military exercise or even the creation of an international organization. Greece is very much in the middle of this diplomatic and military frenzy, so understanding Greek foreign policy can provide penetrating insights into developments in the region.

Athens views the Eastern Mediterranean as a source of turbulence and instability—a transit route for waves of refugees, bordered by war-torn states like Libya and Syria, and with the potential for jihadist terrorist attacks. The recent increase in great-power competition in the region, with Western powers trying to push back on growing Chinese and Russian influence, adds to the volatile mix. The situation is further compounded by Greek officials’ perception of Turkey under President Recep Tayyip Erdogan as an increasingly authoritarian, unpredictable and revisionist state, with fraying ties to the West.

Post Views: 33
Previous Will Either Macron or Erdogan Back Down in the Eastern Mediterranean?
Next Austin: U.S. ‘Committed to Preventing Iran From Gaining a Nuclear Weapon’