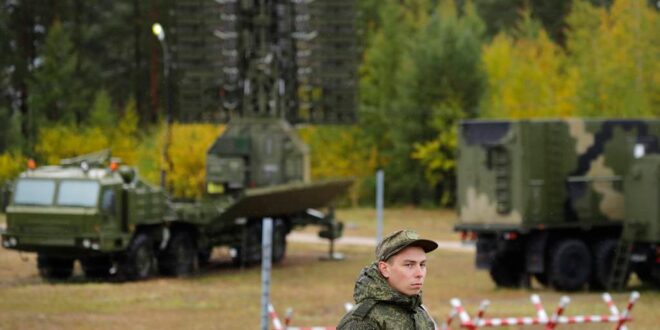 If the Russian military crashes through a forest, will NATO hear a sound?

Russian military forces have massed on the border with Ukraine as well as in Russian-occupied Crimea. Tens of thousands of Russian troops, armored forces and elite ground units have taken up positions within 140 miles of the Ukrainian border, sometimes doing so at night to conceal their movements. Some experts consider a major Russian offensive increasingly probable. So concerned is Washington that, earlier this month, U.S. officials warned NATO allies that another Russian invasion of Ukraine may be imminent. The question now confronting NATO is whether and how to react.

If Russia invades, the Western response should unfold along economic, diplomatic and military lines, including cutting Russian access to international finance, tapping strategic petroleum reserves to reduce demand for Russian energy supplies and opening the spigot on Western arms transfers to Ukraine. In the military realm, NATO ought to consider whether it will employ its most effective military tool for responding to just this kind of security crisis — the NATO Response Force, or NRF.

This rapid reaction force — largely led and manned by Europeans — was built for just the kind of crisis that Russia is fomenting with its destabilizing buildup. With American leaders eager to see allies pick up more of the security burden in Europe, and some Europeans keen to see the continent pursue greater strategic autonomy, relying on the NRF seems like a no-brainer. But if Russian forces come crashing across Ukraine’s border, will NATO call upon its response force?

The multinational NRF was the brainchild of American defense leaders in the early 2000s. The intent was to strengthen NATO’s readiness and responsiveness as well as act as a catalyst for improving and expanding European military capabilities. In the wake of Russia’s invasion of Ukraine in 2014, NATO revamped the NRF, shortening the response time of its centerpiece multinational brigade of 5,000 troops to as little as 48 hours.

Although 5,000 allied troops pale in comparison to the tens of thousands Russia has deployed near Ukraine’s border, sending the NRF to Estonia, Latvia, Lithuania, Poland and Romania would reassure the populations of those countries, signify solidarity across the alliance and bolster security in Eastern Europe at a time when Russia is doing its best to destabilize the region. For several of these countries, Russian military-muscle flexing represents an existential threat, one that has recently worsened thanks to two unsettling trends.

The first has been the weaponization of energy as a tool of Russian statecraft. In recent weeks, Moscow sat idle as spiking natural gas demand in Europe pushed prices into record territory, even though Russia had some capacity to increase supply. Instead, Moscow appears to have used natural gas supply to pressure Europe to approve the Nord Stream 2 gas pipeline. Only in the last two weeks did Russia finally increase supplies delivered through existing pipelines to Europe, relieving some of the price pressure. Nonetheless, Moscow’s willingness to use energy as a weapon once again has left an enduring impression.

The second is the use of migrants to destabilize countries across northeastern Europe. Russia’s proxy, Belarus, recently unleashed thousands of migrants from Syria, Iraq and elsewhere across its borders with Lithuania, Poland and Latvia. Although Belarus’s dictator, Alexander Lukashenko, maintains an awkward relationship with the Kremlin, his dependence on Russia makes it highly unlikely that he is acting completely on his own and without Moscow’s implicit approval.

Although NATO has limited tools to handle hybrid threats such as energy blackmail or weaponized migrants, it does have the capability and capacity to respond to conventional military threats. In fact, NATO boasts the NRF can be quickly tailored to meet a variety of military missions anywhere in the world.

However, since the NRF’s inception, NATO has been very reluctant to use it. Aside from Afghan election support (2004), Athen’s Olympic security (2004), and disaster relief in Pakistan and the United States (both in 2005), the NRF has seen little action. Most inexplicably, it played no role in reinforcing the Baltic states, Poland or Romania in response to Russia’s invasion of Ukraine and its annexation of Crimea in 2014.

Although the NRF is clearly the right tool for the job, it’s not clear NATO will call upon it. One potential stumbling block is that the NRF — like nearly everything else in NATO — requires consensus; and some allies, such as France, have been reluctant to see the alliance make full use of this capability. As alliance membership has grown, achieving consensus on deploying the NRF has only become more difficult.

Nonetheless, the NRF ought to be the centerpiece of NATO’s conventional military response to Russian aggression in Eastern Europe, even as allied officials simultaneously work economic and diplomatic efforts. At a time when Washington is eager to see allies step up their role in providing security and stability as the United States devotes increasing resources and attention to China, it makes little sense to leave this European tool in the toolbox during a European crisis.