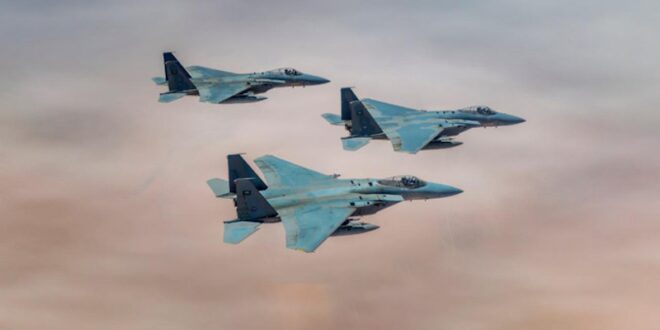 Operational objectives of airstrikes on locations in Yemen’s capital had been achieved, the Arab coalition said early Saturday.

Recently, the coalition has been striking Houthi militia assets in the city in an effort to degrade the Iran-backed group’s capabilities to launch attacks toward Saudi Arabia.

The coalition said they had hit drone workshops and weapons depots in the Dhahan neighborhood and warned civilians from crowding around the targeted areas.

On Friday, the coalition release satellite images of the aftermath of airstrikes on Houthi camps in the presidential palace.

“We have taken preventative measures to spare civilians and civilian objects from collateral damage,” the statement carried by the Saudi Press Agency said. “The operation was conducted in accordance with international humanitarian law and its customary rules.”

The Arab coalition said on Monday that the Houthi militia in Yemen have turned Sanaa airport into a military base for experiments and cross-border attacks.

Video footage released by the coalition showed the Iran-backed Houthis carrying out training exercises on UN planes, with the intent of testing a missile air system, Saudi state TV reported.

Saudi Arabia is targeted by the militia nearly daily using explosive drones, which are often easily destroyed by the Kingdom’s air defenses.

The Saudi-led Arab coalition has been fighting to restore legitimacy to Yemen’s internationally recognized government, after Houthis seized the capital, Sanaa, in 2014.

Houthi attempts to target civilians has been labeled as war crimes by the Kingdom.

The war, which has now lasted for seven years, has cost thousands of Yemenis their lives and has forced many more to depend on humanitarian assistance.

Post Views: 81
Previous US Military Presence In The Gulf Is A Strategic Priority – OpEd
Next Iran: FM Amirabdollahian Calls For Assurances Against US Withdrawal From Possible Deal