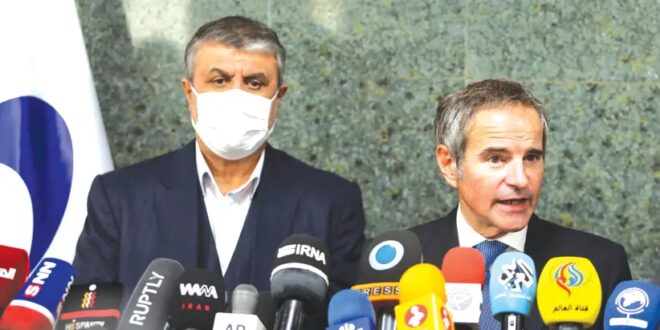 Are Israel and US clashing over Iran nuclear policy?

ISRAELI-IRANIAN AFFAIRS: As Washington and Tehran start a new round of chicken, how should Jerusalem position itself?

With nuclear negotiations in Vienna set to start on Monday of next week, the open conflict between Israel and the US over Iran policy almost seemed to overtake the conflict between Jerusalem and Tehran.

Prime Minister Naftali Bennett is extremely concerned that Washington is rushing toward a nuclear deal weaker than the 2015 JCPOA Iran deal, and made his most direct military-sounding threats yet this week.

Israeli-American exchanges on the issue could get a lot worse before they get better, at a time when predictions for the nuclear talks in Israel tend to range from Iran will not agree to anything to America will cave in for a bad deal.

How did we get to this point and where are we going?

THESE LATEST fireworks come after four evolving stages of ups and downs of how Israelis have viewed the Biden administration’s Iran policy over the last 10 months. The current stage seems to have returned to the original deeply worried stance of November 2020, and with Iran itself at a more dangerous point.

When US President Joseph Biden was elected and in his early months, top Israeli officials in the administration of Benjamin Netanyahu ranged between resignation and dread that America would rejoin the JCPOA 2015 Iran nuclear deal with no conditions.

For Israeli officials at that time, this would have erased all of the sanctions and psychological leverage they had built up over Iran over two-and-a-half years. And this without receiving anything, while paving the way for the Islamic Republic to a nuclear weapon when the JCPOA would expire, if not before.

But the second stage was more optimistic in Jerusalem.

Despite demands and threats from Iran that Biden must return to the JCPOA on its terms by January or February, the Biden team took its time and said it would cut a deal only along with an add-on deal afterward that would strengthen and lengthen the JCPOA.

Among some other issues, this goal of Washington is one of the reasons that the April-June negotiations fell short of an agreement, even if they got close.

One could call this period the first Israeli win in that the US stuck to its positions.

However, then there was a third stage of confusion in which there were no negotiations from June until now, where Israel was increasingly disturbed by the Islamic Republic’s escalating nuclear violations.

These violations included enrichment to 60% (only one step below 90% weaponized uranium), sufficient uranium for multiple nuclear weapons (if enriched up to 90%) and blocking IAEA access to key nuclear facilities.

Separately and certainly cumulatively, such stark violations with no serious crisis reaction from the US, Israel or the UN, might have been unthinkable in earlier years.

But on the positive side for Israel, America started to talk about a plan B with Iran.

The US seemed to judge that diplomacy was failing and that the new administration of Iranian President Ebrahim Raisi simply was unwilling to reach anything resembling a reasonable deal.

Although there was uncertainty surrounding how close the Islamic Republic was progressing toward a nuclear weapon, this period was possibly the best for Israeli-US relations because both administrations were equally frustrated with Raisi’s stonewalling.

However, once the IAEA Board of Governors seemed ready to publicly condemn Tehran in September, which could have even led to a UN Security Council referral, Raisi finally signaled a readiness to return to talks.

Even a whiff of a return to talks shut down the expected September IAEA condemnation and brought Washington into engaging in rapid diplomacy.

Despite IAEA Director-General Rafael Grossi’s framing of negotiations with Iran as intractable so far (and the IAEA tried to bend over backward to be diplomatic), all signs were that the board of governors would punt the issue again during its meetings this week.

Off the record, US officials also started floating new flexibility toward the Iranians.

It is unclear whether the new flexibility means allowing Tehran to maintain all of its new army of advanced centrifuges for enriching uranium, or whether it means a “less for less” deal in which the US would partially lift sanctions for even a partial reduction in Iranian nuclear violations.

Raisi had already achieved more than his predecessor, Hassan Rouhani, simply by refusing to talk for a few months. This is clear from the fact that the old “less for less” deal floated in 2019 required the Islamic Republic to start returning to the nuclear deal – not just to freeze new violations.

If, in 2019-2020, advanced centrifuges would need to be destroyed (and there were fewer of them anyway), now they could just be placed in storage. Placing them in storage would mean they could easily be returned to operation in a matter of days or weeks.

THE WEAK US position frames much of where things are going.

If the Biden administration is ready for a weaker JCPOA or a weaker “less for less” deal or any negotiations that seem to reduce the sense of crisis, even without a deal – then its original idea of improving the JCPOA would seem to be out the window.

Some top Israeli defense figures, including Defense Minister Benny Gantz, have been promoting Israel working quietly behind the scenes to get a better JCPOA, even if it does not get everything it wants – for example, greater limits either on Iran’s ballistic missiles (there are currently none with any teeth) or on its aggression in the region.

But if Washington is not equipped or committed sufficiently to achieve these improvements, then what exactly can Israel hope to get from the US?

Could it be as narrow as what circumstances Biden would green-light an Israeli preemptive strike on Iranian nuclear facilities, even if he will not order a strike on his own?

Would Biden give such a sign-off?

US Secretary of Defense Lloyd Austin and US CENTCOM head General Kenneth McKenzie Jr. this week both emphasized that the US military option is on the table.

Yet, because of Biden’s passivity in using military force to date and his botched pullout from Afghanistan (Trump also intended to pull out, but his assassination of IRGC Quds Force chief Qasem Soleimani intimidated the ayatollahs more than Biden has to date), many view this as empty talk with no details.

For example, during the Obama administration, US military officials gave public interviews about the readiness to use specific aircraft and weapons – and none have done that yet this round.

POSSIBLE RELUCTANCE on Biden’s part to use force raises the old question, dating back around a decade, of whether Israel has the capability to take out Iran’s deep underground Fordow facility.

There are additional, more recent questions about whether Israel could take out enough of Iran’s multiple nuclear facilities (unlike the cases of Iraq and Syria, where each had only one major facility) on its own to sufficiently set back the program.

Interestingly enough, there was a wide disparity of answers on this question by former top Israeli officials.

Former Mossad chief Tamir Pardo and former Mossad Iran desk chief Sima Shine both said they doubted that Israel could on its own.

Pardo’s successor at the Mossad, who just retired in June, Yossi Cohen, told the Jerusalem Post Conference last month and a Haaretz conference this month that Israel should make sure to have or develop such a capability – leaving his position unclear.

Similarly, former National Security Council chief Yaakov Amidror emphasized that Israel needs to have such a capability, but was vague about whether Israel could do so now.

Whether the “yes” officials are bluffing to deter Iran or the “no” officials are misinformed or are downplaying Israeli capabilities to deter Jerusalem from rushing to pull the trigger, Bennett, even after this week’s speech, has not made it clear at what point he would strike.

With all of Netanyahu’s tough rhetoric, even he was intimidated from striking Iran for several years when the JCPOA was being negotiated or was operating.

Would Bennett really strike the Islamic Republic if there was a new version of the JCPOA operating, holes and all, but with the US back in the deal?

Would he aggressively use the Mossad to sabotage nuclear facilities and slow down the Islamic Republic as Netanyahu did, even if the delays from such hits might be measured only in months and not in years?

IN ALL of this, there is one factor that is much worse now than in the 2012-2015 period, a factor that led Iran to make at least some big short-term nuclear concessions for the JCPOA.

Then, China and Russia wanted the ayatollahs to make concessions and make the crisis go away.

But now China and Russia are both at new low points with the US, and short of Biden offering some game changer on Taiwan or Ukraine, he may have little to offer them to get them to press Tehran to cut a more reasonable deal.

In short, Israel is entering a period where the overall trends for changing Iranian behavior are worse.

It may need to live with an extended period of uncertainty, as the US and Iran start a new game of chicken, which some think could run deep into 2022.

Exact intelligence from the Mossad and others about how far Iran has advanced will be more crucial than ever in walking the tightrope.

Post Views: 54
Previous Elitism is Not the Answer to Populism: On ‘Anti-Vaxxers’ and Mistrust in Government
Next France: Is Éric Zemmour an Anti-Semite?