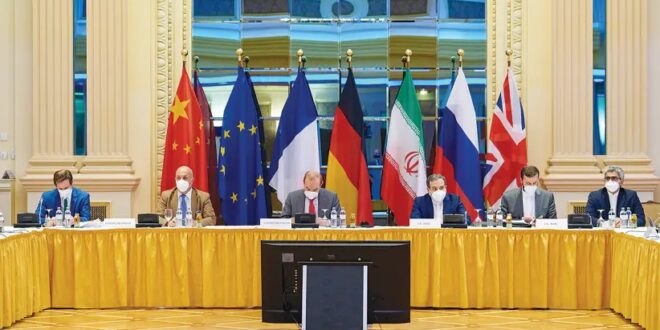 Monday’s indirect talks between the United States and Iran, with the participation of major powers, aim at bringing the two countries into full compliance with the 2015 nuclear deal.

Negotiations in Vienna will only be about lifting sanctions and not Iran’s nuclear program, Iranian officials continued to insist on Friday, three days before the planned resumption of talks.

The head of Iran’s Atomic Energy Organization, Mohammad Islamic, said the Vienna talks will not be about “nuclear issues,” but rather about America’s return to the 2015 nuclear deal, Iranian media reported, echoing remarks by other officials in recent weeks.

Monday’s indirect talks between the United States and Iran, with the participation of major powers, aim at bringing the two countries into full compliance with the 2015 nuclear deal, which limited Iran’s uranium enrichment along with the gradual lifting of sanctions. Washington abandoned the accord in 2018 and reimposed crippling sanctions on Iran.

The US and Iran negotiated from April to June towards that end, but Iran left talks ahead of its presidential election.

The new government in Tehran, led by President Ebrahim Raisi, is even more anti-Western than its predecessor and less disposed towards returning to the agreement, and has repeatedly said it is only interested in having the US lift sanctions, as opposed to returning to Iran’s commitments under the 2015 deal.

“If the opposing sides are prepared to return to their full obligations and the lifting of sanctions, a good and even immediate agreement can be reached,” Amirabdollahian said in a telephone conversation with the European Union’s foreign policy chief, Joseph Borrell.

Foreign Minister Yair Lapid is expected to take off for London and Paris on Sunday, where he plans to meet with UK Prime Minister Boris Johnson and French President Emmanuel Macron to discuss the Iranian nuclear threat ahead of the negotiations.

Lapid’s office said on Saturday that the spread of the new Omicron variant of COVID-19 did not change his plans.

International Atomic Energy Agency Director-General Rafael Grossi said on Wednesday, following a trip to Tehran this week, that he had made no progress on several disputes, the most pressing of which was getting access to the workshop at the TESA Karaj complex two months after Iran promised to grant it.

The workshop makes components for centrifuges, machines that enrich uranium, and was hit by an apparent sabotage attack in June in which one of four IAEA cameras there was destroyed. Iran removed the cameras and the destroyed camera’s footage is missing.

“We are close to the point where I would not be able to guarantee continuity of knowledge,” Grossi said.

However, Amirabdollahian told Borrell that Iran would attend the Vienna talks in “good faith” – despite the US violation of the 2015 agreement.

Post Views: 93
Previous Iranian arrested in Kenya for planning terror attacks against Israeli targets – report
Next Israel should ensure that politics don’t get in way of Biden-Iran talks – editorial