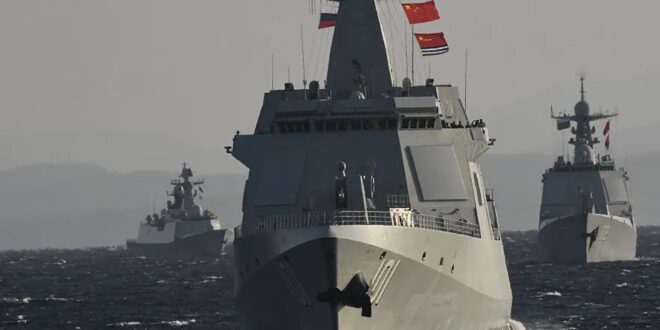 Intensifying Russian and Chinese joint military activities around Japan are intended to cow Tokyo into timidity. They are likely to have the opposite effect.

The Russian heavy bomber’s propellers whipped up snow from the runway at the Ukrainka base in Russia’s Far East as it took off to join its Chinese counterparts. This is how the Russian Defence Ministry’s footage of the joint strategic bomber patrol conducted on 19 November begins. Featuring two Russian TU-95MSs (‘Bears’), as well as SU-35S fighters and two Chinese H-6s, the patrol passed from the Sea of Japan into the East China Sea, then flew over the Miyako Strait that bisects Japan’s Ryukyu archipelago. This was the third time Russia and China had conducted a joint bomber patrol close to Japan since 2019.

This air activity came just a month after Russia and China conducted the Joint Sea-2021 naval drills in the Sea of Japan. These were followed by an unprecedented joint circuit of the main Japanese islands by five Russian and five Chinese warships. On 18 October, these vessels made the countries’ first joint transit of the Tsugaru Strait that separates Honshu from Hokkaido. They then headed southwest, tracking the Japanese coastline, before passing through the Osumi Strait, south of Kyushu, and entering the East China Sea. In total, the Russian and Chinese ships travelled 1,700 nautical miles together.

Separately, on 19 November, Japan reported that a Chinese naval survey ship had entered its territorial waters near Kyushu. On 22 November, it was also announced that Russia had simulated using the S300V4 system that it deployed on Iturup in December 2020 to shoot down an ‘enemy aircraft’ that had intruded into the airspace over the Southern Kurils. These islands are controlled by Russia but claimed by Japan as its territory.

This intensification of military activity has unsettled Japan. Speaking on 23 November, Defence Minister Nobuo Kishi stated that ‘It can be considered that the repeated military drills by China and Russia were intended as a show of force against Japan … This vividly shows that the security situation surrounding Japan is becoming more severe’. Foreign Minister Yoshimasa Hayashi also revealed that Tokyo had communicated its ‘serious concern’ to both Moscow and Beijing.

Of course, the Russian and Chinese militaries make the customary claim that the drills are not directed against any third country. They also note that the joint air and naval patrols did not violate Japanese sovereignty and that their warships have every right to transit the straits surrounding Japan. This is true, yet the sudden uptick in Russia–China military cooperation is clearly intended to send a political message.

For Russia, the drills are an opportunity to respond to Japan’s deepening cooperation with NATO partners. In 2021, naval vessels from several NATO countries conducted drills with the Japan Self-Defense Forces (SDF). The most notable example was the visit to Yokosuka of the UK’s aircraft carrier HMS Queen Elizabeth in September. This is part of Japan’s strategy to supplement its alliance with the US by enhancing security partnerships with other like-minded states. Russia, however, does not welcome NATO members’ presence in Northeast Asia.

Additionally, the exercises with China are an opportunity for Russia to respond to the activities of US forces based in Japan. On 15 October, the Russian defence ministry claimed that it had ousted the USS Chafee, a guided missile destroyer, from the Peter the Great Bay close to Vladivostok. Russia claims the area as its territorial sea, yet the US contends that it is international waters.

Lastly, Moscow may view the joint patrols with China as an opportunity to warn Tokyo of the consequences of a less friendly stance towards Russia. Under Shinzo Abe, who served as prime minister from 2012 to 2020, Japan prioritised political and economic engagement with Russia. However, Abe’s successor, Yoshihide Suga (September 2020 to October 2021), conducted only one phone call with President Vladimir Putin. The new government of Prime Minister Fumio Kishida has also suggested it will take a less accommodating stance on the territorial dispute with Russia. It has also stressed that it intends to conduct ‘firm diplomacy’ with Russia and China.

As for China, the intention may be to push back against Japan’s deepening security cooperation with the US, India and Australia in the format of the Quadrilateral Security Dialogue (Quad), which Beijing mischaracterises as an ‘Asian NATO’. However, a bigger priority is Taiwan. When Prime Minister Suga met US President Joe Biden in April 2021, the leaders’ joint statement stressed ‘the importance of peace and stability across the Taiwan Strait’. This was the first such reference to Taiwan in a US–Japan leaders’ statement since Tokyo switched diplomatic recognition to Beijing in the 1970s. In August, senior members of the ruling parties of Japan and Taiwan also held talks, which included discussion of security issues.

Overall, then, Moscow and Beijing seem intent on making Japan feel encircled and thus coercing it to refrain from actions deemed counter to Russian and Chinese interests.

While Japan is the main target, an interesting side-game is being played towards South Korea. On 19 November, two Chinese and seven Russian military aircraft entered South Korea’s air-defence identification zone and conducted drills near the Liancourt Rocks, which are administered by South Korea but claimed by Japan. The intention here seems to be to exacerbate tensions between Seoul and Tokyo, the US’s main allies in East Asia. Strikingly, the latest Russia–China drills around this disputed territory occurred just two days after South Korean and Japanese officials refused to join a joint press conference due to a visit to the contentious rocks by the South Korean chief of police.

This is a tactic that has worked well before. In July 2019, a Russia–China joint air patrol was immediately followed by the intrusion by a Russian A-50 AEW&C aircraft into the airspace above the Liancourt Rocks. As a result, Tokyo and Seoul squabbled over who had the right to respond to the violation of national airspace.

This form of military cooperation between Russia and China is only set to intensify, not least since, on 23 November, defence ministers Sergei Shoigu and Wei Fenghe signed a roadmap which ‘expressed a shared interest in stepping up strategic military exercises and joint patrols’. However, with respect to Japan, these efforts are likely to prove counterproductive.

While Moscow and Beijing would like to see Tokyo cowed into timidity, the joint patrols will instead reaffirm Japan’s conviction that it must do more to uphold its security. This involves three steps.

First, Japan is committed to doing everything possible to enhance its cornerstone alliance with the US. This includes a swift agreement to increase Tokyo’s contribution to the costs of US forces deployed in Japan. As reported on 24 November, this is likely to see Japan pay an additional ¥50 billion each year.

Second, Japan will only enhance its efforts to build supplementary security partnerships with other Western democracies. Top priority will be Australia, with whom Japan agreed, in principle, to a Reciprocal Access Agreement in 2020. In November 2021, the SDF also conducted an ‘asset protection’ mission with the Australian navy, the first time Japan had done so with a non-US military unit.

Third, external pressure has convinced Japan of the need to do more for itself. This was demonstrated by the ruling Liberal Democratic Party’s manifesto commitment in Octoberto seek to raise defence spending to 2% of GDP, thus breaking Japan’s informal commitment of not exceeding 1%. True to this ambition, on 26 November, the Japanese cabinet approved a package of additional military spending worth $6.8 billion, taking total defence spending to 1.13% of GDP.

Japan’s government certainly does not welcome the intensification of joint military activity by Russia and China. However, from a political perspective, it has its uses. These activities have helped drive home the argument that, in an increasingly severe security environment, Japan must put aside historical hesitancy and become a more active player in international security.

Post Views: 89
Previous Britain as a Force for Good: Six Ways to Turn a Slogan Into Reality
Next The Gulf States and the Iran Nuclear Deal: Between a Rock and a Hard Place