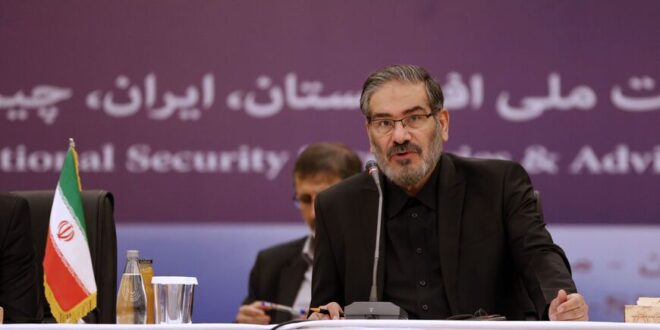 A top Iranian official attributed the ouster of the Islamic State in Syria and Iraq to Tehran-backed militias while claiming that Washington seeks to revive the extremist group.

The secretary of Iran’s powerful Supreme National Security Council has said the United States is seeking to resurrect the Islamic State across Iraq and Syria.

Ali Shamkhani gave credit for IS’ “defeat” to “the resistance front,” an umbrella term Iran applies to a network of proxies it funds and arms across the Middle East. “America is deeply infuriated” by such victory, Shamkhani declared.

The former defense minister, who rose through the ranks of the Islamic Revolutionary Guard Corps, made the comments at a Dec. 7 meeting with Syrian Foreign Minister Faisal Mekdad in Tehran.

Iran has been a relentless critic of the US presence in the Middle East, accusing Washington of funding terrorism and inciting sectarian violence there.

Shamkhani said the US government “is bent on igniting new crises in the region.” Without elaborating, he warned of the “dangerous” regional security implications of that “conspiracy.”

The United States and other Western powers view Iran’s growing influence in Iraq and Syria as destabilizing. Tehran defends its “legitimate” presence as a response to official invitations from the two “sovereign states.”

Amid the Islamic State’s lighting takeover of swaths of territory across Iraq and Syria in 2014, the Iranian establishment deployed one battalion after another into both countries as “defenders of the shrine.” The term refers to protecting Shiite sites of reverence from attacks by IS Sunni extremists.

The Iranian mission was commanded by Qasem Soleimani, the head of the IRGC’s elite Quds Force. Soleimani’s leadership was cut short by a US strike on his convoy outside Baghdad’s International Airport in early 2020, an assassination that pushed Tehran and Washington closer to military conflict.

Arguments have surfaced since then about the Quds Force’s perceived decline in both Iraq and Syria in the post-Soleimani era, as his successor Ismail Qaani is viewed as lacking Soleimani’s charisma and command that appeared to have rallied a wide network of militia groups around one flag.