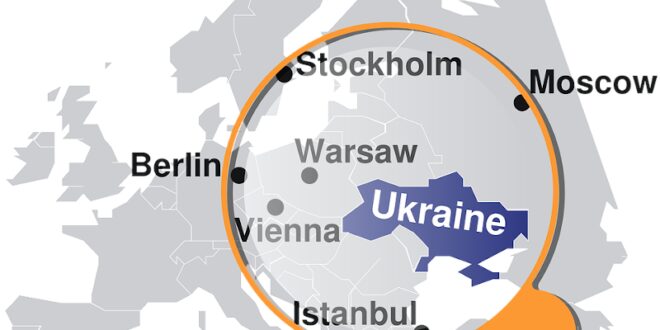 With the likes of CNN regularly giving puff segment to Kiev regime officials and other anti-Russian leaning sources, there’s considerable room for Anglo-American mass media improvement in the analysis of Russian-Ukrainian issues. One of a limited exception of good analytical journalism on the subject, is the December 7 aired PBS segment, involving host Christiane Amanpour, interacting with Alexander Vershbow and Andrey Kortunov.

John Batchelor’s regular segments with the late Stephen Cohen, were a positive offset to the predominating anti-Russian biases in Western mass media. Cohen’s passing leaves a void, which Batchelor has yet to fill.

Batchelor is the kind of host who lets his guests express themselves with little challenge. A clear example of this interaction is evident in his December 5 divided online segment with a certain HJ Mackinder.

Batchelor creatively brings back to life Mackinder, the renown British academic of geopolitics and geostrategy, who died in 1947. A Google search of “HJ Mackinder” comes up with no one else listed in the lead results under that name. I’ll let others determine how well of a representative is Batchelor’s recreation.

Perhaps the Stephen Cohen that I’ve in mind can come back on Batchelor’s show. If not, there’re competent living individuals with like-minded views. Most of Batchelor’s guests haven’t entered the afterlife. Regarding deceased academic greats on Russia related matters, Nikolay Karamzin, Michael Karpovich and Vasily Klyuchevsky, are among those to study and reference.

In belittling opposition to Ukrainian membership in NATO, the reincarnated Mackinder confidently notes Russia’s considerable power and the numerous countries already added to NATO since the end of the Cold War. In addition, he says that Russia was only conquered once in its history. As stated and without follow-up, these observations are quite shortsighted.

Throughout history, Russia has incurred foreign interventions which resulted in great suffering for that country. Hence, Russians have every reason to be concerned with an unfriendly military bloc increasing its strategic reach on their borders.

This isn’t a paranoid observation. NATO’s top brass and its greatest enthusiasts show a clear disregard for Russian concerns, while downplaying the flaws of anti-Russian elements. The chance for war is greater when the legitimate interests of one or more sides is/are overlooked.

California Congressman Adam Schiff said that American involvement in Ukraine is to keep Russia away from the US. Along with some other US politicians, Schiff has received a good deal of funding from US defense contractors. A listing of the top countries in defense spending, contradicts the image of Russia seeking increased power over the US via military clout.

America has a military presence in the Black Sea and in several former Soviet republics. Where’s the Russian military in the US Atlantic and Pacific coastlines, as well as the Gulf of Mexico?

In his interaction with Batchelor, Mackinder erroneously perceives Russian President Valdimir Putin as someone looking to create a problem to take attention away from his (as viewed by Mackinder) failings. If anything, Zelensky and Biden have more reason than Putin to exaggerate certain things to divert attention away from other issues. In actuality, Putin remains (by world standards) a popular president in Russia, in stark contrast to Ukrainian President Volodymyr Zelensky’s low standing in Ukraine and US President Joe Biden’s approval rating.

There’s the possibility of Kiev regime controlled Ukraine launching an Operation Storm like attack on the rebel Donbass area. This is something which Russia will understandably not tolerate. Such an action will likely cause a noticeable refugee exodus to Russia, with pro-Russian proponents critically calling for a follow-up counter. In this circumstance, Ukraine in NATO increases the likelihood of a greater conflict.

NATO prefers prospective members to have peacefully agreed borders – something not evident with Kiev regime controlled Ukraine. Are the authorities in Kiev willing to give up its claims to Crimea and the rebel held Donbass territory in exchange for NATO membership? Would Russia be especially pleased with that scenario?

The answer to the second question is probably not. In Kiev regime controlled Ukraine, there’re some areas with a noticeable pro-Russian contingent – something that will not be so easy for Russia to formally see drift further away.

A clearly stated provision that Ukraine will not be in any military alliance will face obstacles as well. Among pro-Russian advocates, there’s the belief that Russia and Ukraine could be allies again at some point in the future. There’s also the Biden-NATO view, which rejects a red line on NATO expansion.

Around the time of the Soviet breakup, Russia exhibited an interest in joining NATO. That sentiment diminished as a result of anti-Russian slants getting the upper hand.

Within Western establishment circles, there’s talk of Russia needing to change for there to be better relations between Washington and Moscow. On the flip side, there’s the view that the predominating biases against Russia need to be reversed for the purpose of accuracy, leading to an improved and mutually beneficial relationship.

There’re signs that there’s a potential for this to eventually happen. Fox News host Tucker Carlson’s December 7 show began with a lengthy rebuke of US policy towards Russia and Ukraine. On a final note, should the Strategic Culture Foundation’s prognostication on an impending Russian invasion of Ukraine prove true, the US government will look all the more foolish.