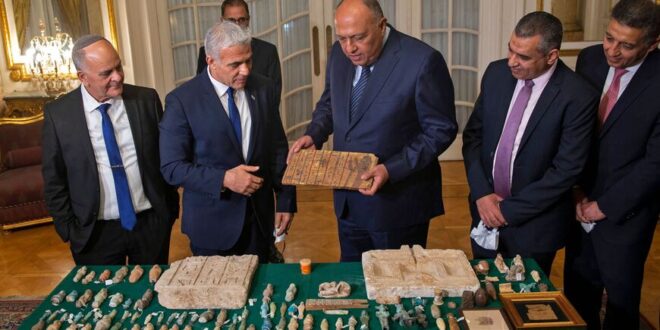 According to the Israeli Foreign Ministry, Lapid and Sisi spoke about the Iranian nuclear program, the Vienna talks and the threat to regional stability posed by Iranian support for armed proxy groups. They also discussed combating terror and measures taken by Israel to strengthen the Palestinian Authority.

Lapid then presented Sisi with his vision for Gaza, a plan he unveiled last September at a conference of the International Institute for Counter-Terrorism at Reichman University. Lapid’s economic plan would offer financial incentives to Gazans in return for an end to Hamas attacks against Israel. The two men also discussed the Israeli demand for the return of the bodies of two IDF soldiers and two Israelis held by Hamas in the Gaza Strip.

The artifacts in question were recovered in January by Israeli police after a series of raids in the center of Israel. Police discovered thousands of stolen archeological artifacts including gold coins, jewelry, ancient Egyptian sarcophagus lids, bronze statues and clay vessels.

Lapid said in a statement after the meeting, “Egypt is an especially important strategic partner for Israel. My goal is to strengthen our security, diplomatic and economic ties with Egypt. It is important to continue to work on the peace between the two nations. I thank President Sisi, whose contribution to the region and to the ties between us are of historic proportions, for the hospitality, and for the warm and open meeting.”

The encounter was the first time the two have officially met. Sisi met last September with Israel’s Prime Minister Naftali Bennett in the Egyptian city of Sharm el-Sheikh, the first public visit by an Israeli prime minister to Egypt in over a decade.

Bennett’s visit there last September, a Cairo trip last month by Israel’s national security adviser Eyal Hulata and Lapid’s visit today all reflect Cairo and Jerusalem’s interest to strengthening bilateral relations in security and other domains. These sentiments were also apparent in the relentless efforts over the past few months by Cairo to mediate a long-term cease-fire and comprehensive agreement between Israel and Hamas.