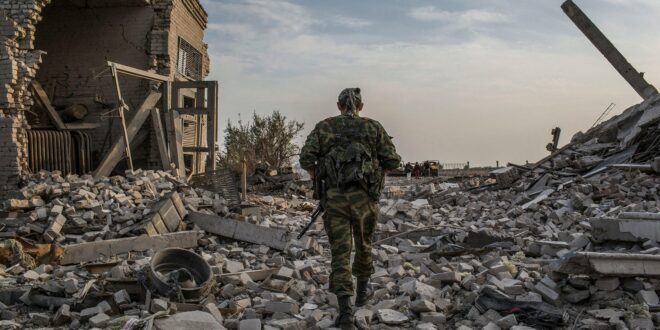 The World and Russia Need to Talk. But Not at Gunpoint.

Russia needs to stand down its old-style threat of war on Ukraine for any dialogue to be possible.

Russia’s massing of military forces around Ukraine now threatens an invasion by as many as 175,000 troops, perhaps in a matter of weeks. While the United States, Ukraine and the rest of Europe would prefer a diplomatic solution to this crisis, dialogue cannot be at the point of a gun. The West must bolster its defenses and prepare economic sanctions, while showing it is ready to discuss Russia’s fears. But Mr. Putin must stand down his military threat to Ukraine and the rest of Europe before any negotiations.

Mr. Putin’s buildup is designed to intimidate Ukraine, Europe and the United States into acceding to Russian control over Ukraine. Yet in the 21st century, empires no longer exist. The Soviet Union dissolved 30 years ago, yielding 15 independent states, each sovereign within international borders recognized by the world community. Many people in these nations, especially those born after 1991, know of Soviet times only from history books. Mr. Putin apparently seeks to regather some of these lands, the most important for him being Ukraine, where Christian Slavic civilization began centuries before there was a Russia. Ukrainians are proud of their culture, language, and heritage and are most unwilling to go back to Russian domination. They remember too well their treatment by Russia throughout history. Mr. Putin’s invasion in 2014 unified the Ukrainian nation. Ukrainians will fight fiercely to remain free of Russia.

In the past, big powers got away with bullying smaller powers. But in the latter 20th century, principles of sovereignty, territorial integrity, peaceful resolution of disputes and respect for individuals replaced outdated and dangerous concepts of big-power spheres of influence. These principles led to unprecedented peace and prosperity in Europe until Russia invaded Ukraine in 2014. In the 21st century there are no first-class nations and second-class nations; there are no first-class people and second-class people. If peace and security are to be restored in Europe, all nations need to recommit to these principles and code of conduct.

Mr. Putin published an article this past summer claiming that Ukraine could not be sovereign and could only exist in partnership with Russia. In 2014 Russia took steps to realize this vision by invading Ukraine and illegally occupying Crimea. Ukrainians have fought the Russians to a standstill, but one that has cost the lives of 14,000 Ukrainians. Russia denies even having forces in Donbas, a stance that stymies negotiations designed to resolve the conflict. This behavior challenges the very existence of an independent, sovereign Ukraine and casts a dark shadow over the idea of a peaceful, united Europe.

Now, Mr. Putin would have us choose between two unacceptable options—options more characteristic of the first half of the 20th century: surrender to his demand to take away Ukrainian sovereignty altogether or face a brutal war in Europe that will cost tens of thousands of lives. A third option is more appropriate in the 21st century: talks among Russia, Ukraine, other European nations, and the United States to address threats to European security. New threats to strategic stability are rising and will legitimately concern all European nations. These include unconstrained military deployments, new weapons technologies, cyber-attacks, and competition in space. Neither NATO nor Ukraine’s aspirations to integrate with Europe threaten Russia.

Russia’s threat is not to Ukraine alone, but to European and international security. To encourage Mr. Putin to put down his weapons and come to the table—to deter a bloody war—Europeans and Americans must demonstrate resolve and strength and maintain a united front against the threat of aggression. Europeans and Americans must let the Kremlin know that resorting to force would be a tragic mistake that would cost Russia dearly. The Ukrainians would defend their land with a stronger, better-trained, better-equipped, better-led military than in 2014. Ukraine’s well-motivated and trained civil resistance, consisting of a large corps of combat veterans, would make Russian attempts to hold Ukrainian territory hell for the occupiers, while U.S. and European economic sanctions would be harsher, broader and more damaging than any the Russians have seen to date.

Our world now faces real danger that confrontations can start with information warfare, escalate to cyber-attacks, and then to conventional warfare and even nuclear exchanges. To prevent such escalation, we need to reinforce norms of behavior, transparency and measures to build confidence among rivals. If Russia feels threatened by an independent, sovereign Ukraine, its diplomats could raise those fears in these talks. These discussions would include a recommitment to the principles that limited conflict in the years prior to 2014—sovereignty, territorial integrity, peaceful resolution of disputes, respect for individuals. No nation, however, can expect to have concerns about its own security taken seriously when it is massing troops on the border with its neighbor.

No real dialogue—whether among nations or among people anywhere—can take place at the point of a gun.

Post Views: 139
Previous Myanmar Struggles to Reverse a Coup; Democracies Can Help
Next The Bosniak Side Of The Equation – OpEd