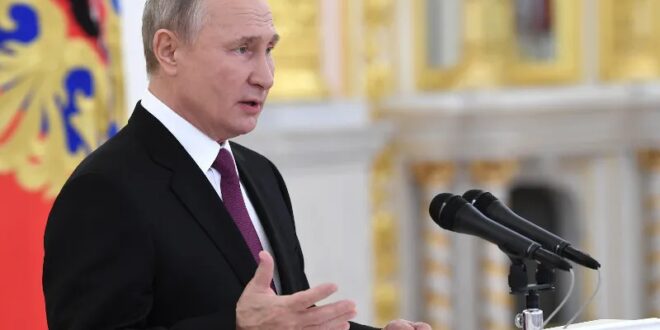 Russian President Vladimir Putin has described the fall of the Soviet Union in 1991 as the demise of “historical Russia,” a comment that could fuel speculation about his foreign policy intentions amid a buildup of tens of thousands of Russian troops in regions bordering Ukraine.

“It was the disintegration of historical Russia under the name of the Soviet Union,” Putin said of the 1991 breakup of the Soviet Union while speaking in a documentary film called Russia. Recent History that aired on state television on December 12.

Putin, a former agent of the Soviet KGB security service, has previously lamented the collapse of the Soviet Union, calling it the “the greatest geopolitical disaster of the 20th century.” The comments in the documentary, however, reveal how much he feels the disintegration of the Soviet Union devastated Russia’s power.

Deputy Foreign Ministry Sergei Ryabkov appeared to push the Russian position even further on December 13, warning that there would be a confrontation if the United States and NATO don’t give the guarantees Moscow seeks.

Officials in both Washington and at NATO have said that no country can veto the NATO aspirations of any country.

Last week, when talking to the presidential council on human rights in Moscow, Putin accused Kyiv of “something that reminds us of genocide.”

The U.S. Embassy in Kyiv responded on Twitter on December 13 by saying Putin’s accusation was “false,…dangerous, and irresponsible.”

“The world knows this, and Russia’s lies about Donbas are another obvious attempt to shift blame for the suffering Russia has caused,” it added.

In the documentary, Putin also spoke about the personal impact the collapse of the Soviet Union had on him.

He said the period of economic and social instability that followed put many into poverty and even impacted his life, claiming he was occasionally forced to drive a car to earn extra money, something many across the country did to supplement their incomes.

“Sometimes I had to earn extra money,” he said. “I mean, earn extra money by car, as a private driver. It’s unpleasant to talk about, to be honest, but unfortunately that was the case.”

Russia was the main cog in the Soviet Union, which grew to include 15 republics from the Baltics in the west to Central Asia.

The Soviet Union disintegrated in 1991 amid deep economic problems.