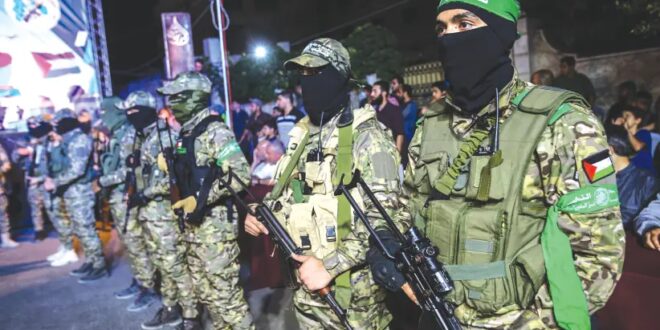 More than half a year since the last round of violent escalations between the two sides, Hamas understands that terror is the route it must take in order to push Israel to make concessions.

Hamas is increasingly pushing for deadly terrorist attacks in the West Bank as tensions continue to rise in the Gaza Strip and inside Israeli prisons for Palestinian prisoners.

More than half a year since the last round of violent escalations between the two sides, Hamas has understood that terrorism is the route it must take to push Israel to make concessions.

Though it has been relatively quiet in the South since a ceasefire brought to an end the 11 days of fighting in May, there have been close to a dozen attacks on Israeli civilians by Palestinians in the West Bank and Jerusalem over the past month and a half.

According to reports, Hamas told Egyptian mediators they do not accept Israel’s connection of reconstructing the coastal enclave with a prisoner-swap deal and warned of renewed hostilities over Israel’s “foot-dragging” over Gaza’s reconstruction and the lifting of the blockade.

“The situation in Gaza is heating up fast, and there may be escalation measures in the near future,” a Hamas source was quoted as saying by Lebanon’s Al Mayadeen television channel on Monday.

Senior Defense Ministry officials and IDF officers have said Israel will continue to maximize humanitarian aid to Gaza while making sure Hamas cannot benefit from the funds or materials for military purposes.

Israel has linked reconstruction of Gaza and its economy to the release of the remains of two soldiers killed during Operation Protective Edge in 2014, as well as two Israeli civilians who entered the Strip and are being held by Hamas.
Meanwhile, Hamas has said reconstruction and a prisoner exchange are two separate issues.

Both Hamas and the IDF are refusing to budge on their demands. And with that, the ruling terrorist group in the Gaza Strip warned it would not sit idly by and has increased the pressure on Israel through attacks in the West Bank.

Hamas agreed with Palestinian Islamic Jihad to increase coordination between their so-called military wings, The Jerusalem Post previously reported. The two groups have praised Palestinians in the West Bank for forming “Popular Resistance Committees to confront attacks by settlers and occupation soldiers.”

Despite the IDF not considering the rise in violence a “wave,” Israel reportedly threatened to resume targeted assassinations in the Gaza Strip and abroad in response to the recent spate of attacks in the West Bank.

The Israeli military has also increased troop presence as well as overnight raids in the West Bank and arrested more than 100 Hamas operatives in the Hebron region of the southern West Bank in recent days. The arrested men had been planning to carry out terrorist attacks against Israelis using military-grade weaponry, Channel 13 reported Monday.

Last month the IDF, Shin Bet (Israel Security Agency) and Israel Police foiled a Hamas cell that was planning to imminently carry out suicide-bomb attacks, shootings, kidnappings and more. The 50-person cell was led by Hamas leaders in Turkey and the Gaza Strip and was made public a day after Kay was killed in Jerusalem’s Old City.

At the same time, Hamas continues to negotiate with Israel via Egyptian mediation about the reconstruction of the devastated enclave and of bettering the lives of Palestinians in the blockaded Gaza Strip.

So while Hamas talks politics, it is clear that the terrorist group has not changed its spots. It will continue to encourage Palestinians in the West Bank to carry out attacks with the intent to kill Israelis.