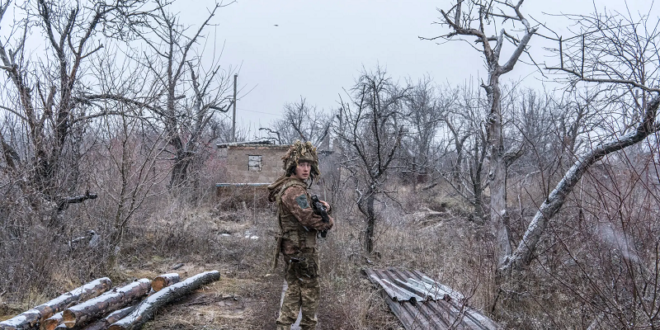 At a traditional year-end news conference, President Vladimir V. Putin of Russia said a potential meeting with the U.S. was a positive sign, but he also demanded a quick response to his security concerns.

President Vladimir V. Putin of Russia on Thursday sounded a positive note about the security talks he has demanded from the United States, but refused to take the threat of war against Ukraine off the table, turning his annual marathon news conference into a showcase of his ability to keep the West on edge.

Mr. Putin said that the United States had agreed to hold meetings on Eastern European security issues early next year, conveying a slightly more upbeat message than he had just two days earlier, when he said Russia was prepared to use “military technical measures’’ to assure its security. But his highly anticipated remarks did little to tamp down fears over an ominous military buildup on Russia’s border with Ukraine.

“I would like to underscore that on the whole, we are seeing a positive reaction for now,” Mr. Putin said at a four-hour session with reporters. “Our American partners are telling us that they are prepared to start this discussion, these talks, in the very beginning of the year in Geneva.”

But Mr. Putin soon added that Russia would not wait long for the West to address its security concerns.

“It was the United States that came with its missiles to our home, to the doorstep of our home,” Mr. Putin said in response to a British reporter’s question as to whether he would rule out an attack on Ukraine. “And you demand from me some guarantees. You should give us guarantees. You! And right away, right now.”

His alternately bellicose and somewhat conciliatory declarations on Ukraine provided a vivid example of the way Mr. Putin is able to control the narrative over the tensions in Eastern Europe — and keep the West guessing at his true intentions.

At the same time, his rhetorical threats, combined with the buildup of troops on the Ukrainian border, have helped him secure something he has long sought: Washington’s attention on issues that have rankled the Kremlin for years. Many Russian officials see a creeping expansion of Western military infrastructure toward Russia’s borders, a fundamental threat, they say, to the country’s security.

Last week, Russia published what many saw as an ultimatum demanding a sphere of influence in Eastern Europe: draft agreements with the United States and NATO that would bar the alliance from expanding to include Ukraine or other countries in the post-Soviet region that are not yet members, or conducting any military activity there. NATO quickly rejected the most far-reaching demands.

In Washington, a senior administration official, briefing reporters shortly after Mr. Putin’s news conference, seemed to contradict Mr. Putin, saying that no date or place had yet been set for negotiations. But he said the Biden administration was willing to begin discussions with Moscow in January, as long as they cover Russian provocations like the troop movements to the Ukrainian border.

United States intelligence agencies have said that Russia has tens of thousands of troops near the Ukrainian border, with plans to amass an invasion force of up to 175,000 soldiers.

Mr. Putin’s positive framing of anticipated talks with the U.S. seemed to suggest that a Russian attack over the Ukrainian border was not imminent. But American intelligence officials have said in recent weeks that if Mr. Putin plans to attack — a decision they do not believe he has made — he would not be ready until later in January, when more of his troops have massed and the ground has frozen. Russia’s heavy armor could sink in the muddy territory until a hard freeze, they noted.

Sam Charap, a Russian security analyst at the RAND Corporation, said he was becoming increasingly convinced that the Russian push for negotiations was meant to buy time for possible military action.

“I just don’t see negotiations on these big-picture documents capable of producing results on the time frame that is being suggested,” Mr. Charap said.

He said the cost of a large-scale military buildup means Mr. Putin will need to make a decision soon. “You can’t just keep this number of forces at this high readiness outside of garrison for months and months and months,” Mr. Charap said.

Whatever Mr. Putin’s intentions, American officials say they are rallying European allies for coordinated sanctions that would snap into place as soon as military action began. It is not clear, however, that the threat of such penalties would impress Mr. Putin, who has noted that Russia has lived with Western sanctions for years.

American and European officials are also continuing to monitor cyberattacks and disinformation campaigns that they say may be preparing the battlefield for any action. The senior administration official noted that such action has “often been done in advance these of sorts of incursions in the past.” The disinformation campaign has attempted to create a narrative that Ukraine is the country provoking a conflict.

In another sign of Western engagement, Valery V. Gerasimov, Russia’s top military commander, spoke with his British counterpart, Sir Tony Radakin, on Thursday, and with Mark A. Milley, the chairman of the Joint Chiefs of Staff, on Wednesday. But in a move underscoring the continuing tensions, Russia on Thursday announced snap paratrooper exercises in and around Crimea, the Black Sea peninsula annexed from Ukraine in 2014.

In his assertions about bringing missiles “to our home’’ Mr. Putin appeared to be referring to missile-defense systems in Poland and Romania. He has alleged that the systems can be used for offensive purposes and could soon be installed in Ukraine; Western officials deny those claims, noting that missile interceptors are, by definition, used only to repel incoming attacks.

American officials say removing missile defenses from NATO countries would undercut European security. They also say they will continue to arm Ukraine with defensive weaponry, including Javelin missiles used against Russian tanks. But because Ukraine is not a NATO member,NATO does not keep antimissile defenses or nuclear weapons there.

The freewheeling news conference on Thursday was a stark demonstration of the Kremlin’s image-making of Mr. Putin as an all-around expert and benevolent leader — a “good czar” keeping local officials in check while steering the world’s biggest country. The lengthy session, meant to display Mr. Putin’s authority and stamina, included a range of questions on far-flung topics including “cancel culture’’ and Father Frost, Russia’s version of Santa Claus.

Mr. Putin has rarely ventured out of his cocoon of social distancing since the pandemic’s start, and this was the first time in two years that he had faced such a large crowd of journalists. The several hundred in attendance had to pass through a disinfectant mist to enter the news conference hall just outside the Kremlin wall, and they were seated no closer than about 50 feet from the president.

Reporters held up signs and shouted to get the president’s attention. A popular YouTube host asked Mr. Putin about new evidence of widespread torture in Russian prisons, to which he responded that such abuse was a “global problem,” including in the United States and France. A journalist for the B.B.C.’s Russian-language service asked about last year’s poisoning of the imprisoned leader Aleksei A. Navalny. Mr. Putin once again claims that the West had failed to provide any evidence.

As usual, many other questions sought Mr. Putin’s help on local issues like central heating problems in the Altai region and World War II sites in need of funds in the city formerly known as Stalingrad.

There were only three questions related to Ukraine. When asked for a “realistic prognosis” of whether Russians could expect a war this winter, Mr. Putin laid out a historical justification for possible use of force, going back more than 100 years.

He argued that lands that should be seen as historically part of Russia were included in the Soviet-era boundaries of Ukraine. After the Soviet breakup, Mr. Putin said, Moscow acquiesced to their loss, so long as Ukraine was neutral. But he said Russia could not tolerate foreign militaries to be based in these areas.

“They are creating on this territory an anti-Russia, constantly sending over modern weapons and brainwashing the population,” Mr. Putin said. “Can you imagine how Russia is to live like this from a historical perspective, always looking over our shoulders at what new weapon systems have been provided over there?”