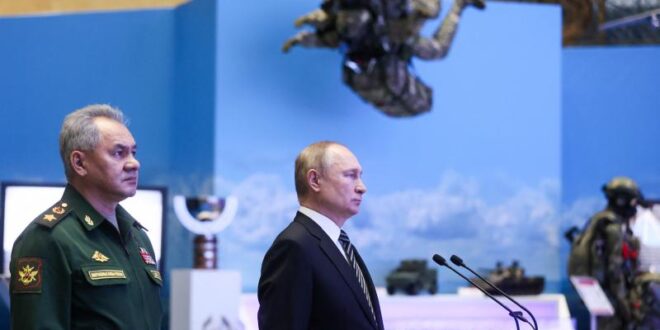 Russia Is Playing With Fire in the Balkans

This year marks the 30th anniversary of the beginning of the Yugoslav wars, Europe’s bloodiest conflict since World War II. Although the Balkan states moved toward democratic governance and integration with NATO and the European Union in the immediate aftermath of the wars, consistent neglect on the part of the West has contributed to a dramatic backsliding in recent years. Now Russian President Vladimir Putin is seizing his opportunity and using the former Yugoslav states as the next battlefield to weaken NATO and the European Union.

Putin’s efforts to push the Balkans to the brink are part of his mission to reestablish Russia as a global power broker. Similar to the Kremlin’s strategy in the Caucasus, Russia’s goal in the Balkans is to ramp up tensions so that it can position itself as the sole regional mediator and security guarantor. It simultaneously aims to demonstrate that neither NATO, the EU, nor their members are credible partners for any of the Balkan countries. As Moscow also continues its military buildup near the Ukrainian border, its influence campaign in the Balkans serves as another theater to challenge the West.

For many in the West, Putin’s strategy is baffling. These analysts see the Balkans as a geopolitical backwater; they do not understand what Russia has to gain by intervening in the region. As the director of the Carnegie Moscow Center put it, “The Balkans are not a prime battlefield in the Russia-West confrontation.”

The Balkans should not be dismissed so easily. Russia sees the region as Europe’s soft underbelly: its growing influence there threatens to allow it to place strategic military assets near a major U.S. base and promises to grant it access to the Adriatic Sea. Putin’s larger aim is to tip the balance of power in Europe to Moscow’s advantage, and the Balkans are a part of that strategy. Moscow has launched information operations to inflame ethnic tensions and encourage protests, cemented arms deals, embedded itself in critical energy infrastructure, and leveraged long-standing religious and cultural ties between the Russian Orthodox Church and the Serbian Orthodox Church to its advantage in the region.

Russia’s efforts have been helped immeasurably by the EU’s weak response. Despite the many years and billions of euros spent preparing the Balkans for EU integration, the effort has stalled. The EU has not expanded since its absorption of Croatia in 2013, and despite promises of membership for the “western Balkans six”—Albania, Bosnia, Kosovo, Montenegro, North Macedonia, and Serbia—for all practical purposes talks have frozen. Marred by challenges as varied as Brexit, the COVID-19 pandemic, the rise of far-right groups, and Europe’s migrant crisis, expansion appears to be on indefinite hold. This failure has made the Balkans an obvious target for Putin.

During the last Balkans crisis in the 1990s, Russia was too weak to intervene militarily. Instead, it was limited to a peacekeeping mission after the Kosovo war in 1999, from which it decided to withdraw in 2003. But there should be little doubt that even then, the Russian government saw NATO’s expansion into eastern Europe as a significant national security threat. Now, with Russia’s comparatively stronger economy and military, the Kremlin sees an opportunity to roll back NATO’s advance by targeting the former Yugoslav states. Western Europe was asleep at the wheel the last time war broke out in the Balkans—the stakes are too high for it to ignore the region this time around.

The endemic corruption in Balkan countries has exposed fissures that Moscow has exploited to advance its aims. As the former Yugoslav states moved from socialism to free-market economies after the 1990s, kleptocracy and illicit privatization took root. According to Freedom House, the western Balkan countries are all slipping back to “partly free.” Putin is using corruption to drive economic, ethnic, and religious wedges into Balkan societies by co-opting the region’s leaders.

Serbia acts as a key player in the Kremlin’s bid for the Balkans. Both the government and the church maintain an allegiance to Moscow that is undergirded by centuries of shared religious and cultural ties—as well as Serbia and Russia’s mutual isolation from contemporary Western powers. The Serbian government called for the creation of a “Serbian world”—a Balkan parallel to Putin’s “Russian world”—designed to unite all Serbs under a common cultural framework. Serbian President Aleksandar Vucic has more immediate strategic interests in Russia’s meddling, insofar as chaos in the region will allow him to frame himself as a force for stability in advance of his reelection campaign in 2022. In order to ensure the elections play out in their favor, Serbia and Russia recently pledged to work together to combat mass protests and “color revolutions” coming from the West.

Russia reciprocates Serbian loyalty through generous support for the Serbian military. Since 2018, Serbia’s defense budget has almost doubled, and it leads all Balkan states in defense-related spending. Despite threats of U.S. sanctions on Serbia, Moscow sent an S-400 missile system to Serbia in 2019 for a military drill. The Kremlin upped the ante further this year when it allowed Serbia to procure Pantsir-S1M air defense systems. Serbia also hosts a Russian-run “humanitarian center,” which serves as an intelligence-gathering institution situated close to Camp Bondsteel—the primary NATO base in Kosovo.

Moscow has openly threatened Balkan countries that have attempted to strengthen their security ties with the West. It attempted to derail a 2018 referendum on NATO membership in North Macedonia, and its ambassador declared the country a “legitimate target” if tensions between NATO and Russia were to increase (the country became a member state in 2020). Next door in Montenegro, Moscow backed an outright coup d’état in 2016 just before its successful bid to join NATO.

Putin is on a mission to reestablish Russia as a global power broker.
Russia understands well that religion in the Balkans has always been instrumental in galvanizing conflicts. In Montenegro, the Kremlin promotes pro-Russian policies through the Serbian Orthodox Church, which has denigrated the concept of distinct Montenegrin and Serbian national identities and intervened in politics on Moscow’s behalf. By working through the church, Russia drummed up mass protests last year and replaced an uncooperative government with pro-Russian leadership.

The Balkans’ most explosive tinderboxes are Kosovo and Bosnia and Herzegovina. Although Kosovo’s population is more than 90 percent ethnic Albanian, Serbs see the country as an ancestral homeland that contains some of the Serbian Orthodox Church’s holiest sites. Just as a civil war exploded out of tensions between different religious and ethnic groups in the early 1990s, the Kremlin is now using the Orthodox Church to destabilize the country and the broader region. Russia’s Orthodox Church has escalated recurring disputes over religious sites, most recently expressing concern for the “destiny of Christian shrines in Kosovo” after tensions flared between Kosovo and Serbia.

Moscow has also made it clear that diplomatic recognition by the United Nations of Kosovo’s independence from Serbia will be impossible without Russia’s approval. Putin often cites Kosovo to justify Russia’s annexation of Crimea, arguing that Western countries’ recognition of the country’s secession from Serbia created a precedent that legitimizes other territories’ unilateral declarations of independence.

Brussels has failed to make progress toward Serbian recognition of Kosovo, just as U.S. President Donald Trump’s 2020 “Washington Agreement” failed to make substantive headway on core issues in the dispute. KFOR, the NATO peacekeeping force stationed in Kosovo, has similarly struggled to maintain stability. In September, the disputed Kosovo-Serbia border erupted in protests over a ban on vehicles with Serbian license plates entering Kosovo. This resulted in a blockade and show of aerial force by the Serbs and the deployment of Kosovo’s police forces. Predictably, Russia followed the event by mocking the KFOR and calling out the EU for inadequate mediation of the ongoing tensions between the two states.

In Bosnia and Herzegovina, the Dayton peace agreement that ended the war in 1995 is in crisis. The country continues to be driven by divisions between its Bosniak, Serb, and Croat communities, and Russia has exploited these divides to its advantage. In March, Russia threatened retaliation if Bosnia joins NATO. Meanwhile, the Serb member of Bosnia’s tripartite presidency, Milorad Dodik, threatened that Republika Srpska, one of the two entities that make up the country, will secede from Bosnia. In December, the Republika Srpska National Assembly voted in favor of starting a procedure for Bosnian Serbs to withdraw from state-level institutions including the Bosnian army, security services, tax system, and judiciary. In addition to Republika Srpska, the Kremlin has been supporting Bosnian Croat nationalists to push for the creation of another entity within Bosnia and Herzegovina. The international high representative in Bosnia, Christian Schmidt, raised alarm bells in November when he said that “the prospects for further division and conflict are very real.”

It is high time that Western powers wake up to the threat that Russia’s meddling in the Balkans poses to their interests. Here, an ounce of prevention is worth a pound of cure. And they have several options at their disposal.

NATO must refocus on the region and prioritize the de-escalation of tensions. It should send its Counter Hybrid Support Team to the Balkans, as it did in Montenegro in 2019, in order to combat Russian disinformation campaigns and other information operations. NATO members should also organize a “coalition of the willing” to counter Russian interference in Bosnia, deploying peacekeeping missions in strategic areas, such as the northeastern Brcko District, to prevent at-risk locales from spiraling out of control. This force could supplement the EU-led peacekeeping force (EUFOR), which is charged with maintaining peace and security in Bosnia—but whose mandate has to be extended in the UN Security Council, where Russia and China wield veto power. U.S. President Joe Biden also signed an executive order to sanction those who threaten the stability of the Western Balkans in June; the EU should join those efforts.

Russia sees the Balkans as Europe’s soft underbelly.
All NATO members cannot be expected to support the Balkans, as Hungary and a few other European NATO nations serve as Russia’s proxies in the organization. On the other hand, the United Kingdom seems to grasp the severity of the crisis. It has promised to maintain “stability in the Western Balkans” and warned Russia against making a “strategic mistake” in the region. London should work to transform these words into action by leading the coalition of the willing to combat Russian interference in region.

Most of all, NATO should fast-track Bosnia’s and Kosovo’s accession to NATO. Doing so would raise the costs on the Kremlin for its operations in the Balkans. Russia has firmly opposed NATO enlargement and now, as the Ukraine crisis continues, has called for a legally binding guarantee that NATO will cease military activity in eastern Europe. Integrating Bosnia and Kosovo would send the message that the Balkans won’t be left to fend for themselves against Moscow and that Putin will not determine the future of NATO.

As it was at the beginning of the Yugoslav wars or in the run-up to World War I, it can be difficult to persuade the world of the Balkans’ importance. In the 1990s, European countries failed to respond with sufficient urgency to the crisis, and the United States was forced to step in. This time around, however, it is the United States that has turned inward and is unlikely to intervene. So the burden will likely rest on the EU. Nothing less than Europe’s stability, and the continued vitality of the EU and the NATO alliance, is on the line.