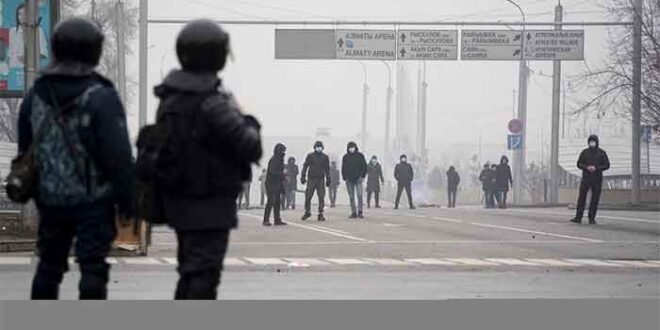 The political crisis in Kazakhstan, which began on January 2 with mass protests against gas price hikes, has become a focal point of geopolitical and social tensions across Central Asia.

With the support of the Kremlin, President Kassym-Jomart Tokayev’s government has cracked down on the protests with extraordinary violence, turning the country’s largest city, Almaty, into a war zone.

Military checkpoints have been set up across the country, and President Tokayev has ordered the troops “to shoot without warning.” Reports, which have been denied by the Kazakh government, indicate that at least 164 people have been killed. The government has confirmed the arrest of over 4,000 people in the country’s biggest city, Almaty, where an “anti-terrorist operation” to “cleanse the streets” is still ongoing.

The internet was reportedly inaccessible to 95 percent of the population last week. The internet shutdown disrupted not only communication but also food supplies, triggering food shortages and a run on the banks.

On Thursday, 2,500 Russian troops were deployed to Kazakhstan within the framework of the Collective Security Treaty Organization (CSTO), the first military intervention of this alliance since its formation almost 30 years ago in 1992. Hundreds of troops have also come from Belarus and other alliance members.

According to the Russian newspaper Nezavisimaya Gazeta, Russian President Vladimir Putin orchestrated the intervention, spending all of last week, which is Russia’s main holiday period of the year, on the phone. Many Russian press outlets have denounced the protests as “pogroms,” while the Kremlin claimed they were the result of “outside interference.”

The rapid military intervention by the CSTO was primarily motivated by the post-Soviet oligarchy’s fear that the social protests could spread across the region. As in Kazakhstan, whose economy was hard hit by the pandemic, inflation and rising utility prices are major concerns for workers. The ruling class is acutely aware that the underlying causes of the mass protests—enormous anger over social inequality three decades after the restoration of capitalism in the former Soviet Union—could spark protests and strikes in their countries as well.

However, while the protests that began in the mining town of Zhanaozen may well reflect longstanding economic and social grievances, violent clashes that began in the city of Almaty last Tuesday appear to have been the result of a conflict within the state apparatus and ruling class. One side is centered on the current President Kassym-Jomart Tokayev, and on the other side are the family and allies of Nursultan Nazarbayev, the country’s former president.

The 81-year old Nazarbayev, a former Stalinist bureaucrat who oversaw the restoration of capitalism in Kazakhstan and now has an estimated net worth of $1 billion, ruled Kazakhstan from 1991 to 2019, when he formally handed over the presidency to Tokayev, also a former Stalinist bureaucrat. However, Nazarbayev and his family, which own large stakes in the country’s oil and gas sectors, were still considered to be in political control of the country and major portions of its economy.

On Tuesday, Tokayev removed Nazarbayev from his position as the head of the Security Council and named himself as his successor. Tokayev also removed several of Nazarbayev’s family members from influential positions and fired the head of the security services, Karim Masimov, one of Nazarbayev’s closest allies. On Friday, Masimov was arrested and charged with high treason. He could face up to 15 years in prison. Tokayev also dismissed the government and appointed several of his close allies to key positions in the government and security apparatus.

Speaking to the German news magazine Der Spiegel, Central Asia expert Arkadi Dubnov said, “Regardless of the condition that Nazarbayev himself is in, there is his clan and his circle, and they apparently control parts of the security forces. Tokaev immediately confronted serious opposition [after removing Nazarbayev]: Instead of chaotic, unorganized, civil protests, a third force appeared on the streets, which in my view was being directed by someone in the leadership of the security forces.”

The crisis in Kazakhstan has sent shock waves throughout the region. By territory, Kazakhstan is the ninth-largest country in the world and has vast mineral resources. There are many pipelines for gas and oil across the country, with China being a major recipient of raw materials from the country.

Because of its economic and geostrategic significance, Kazakhstan has also become a focal point of the US war drive against both Russia and China. Both under Nazarbayev and Tokayev, Kazakhstan has continued to maintain relatively close ties to Russia. However, the oligarchy in Kazakhstan is trying to balance this with economic cooperation with major US corporations, such as Chevron and Exxon Mobile. Astana, Kazakhstan’s capital, has also developed closer ties with Turkey, another NATO member state.

Nikkei Asia noted the impact of the turmoil in Kazakhstan on cryptocurrencies:

China, in particular, has expressed great concern about the potential geopolitical implications of the crisis. Kazakhstan is critical for China’s Belt-and-Road Initiative, and Beijing also has substantial investments in Kazakhstan’s oil and gas sectors.

On Friday, Chinese President Xi Jinping expressed his full support for Tokayev’s crackdown on the protests, assuring him that China could provide economic and other assistance to Astana. Xi warned, in particular, of any outside intervention in the crisis.

Speaking to the Global Times, a hawkish outlet that is closely affiliated with the Chinese government, Chinese analysts have described events in Kazakhstan as a “color revolution,” while warning that the US could intervene to destabilize the situation on China’s western borders. Kazakhstan borders on the Xinjiang region, which is home to much of China’s Uyghur population. Many Uyghurs also live in Kazakhstan. The Uyghur population on both sides of the border is connected through long-standing economic and family ties. Alleged concern over human rights abuses of Chinese Uyghurs has been a major plank in US imperialism’s agenda.

Beijing no doubt fears that any unrest in Kazakhstan could quickly spill over the border and that the US, in particular, could intervene to further fuel ethnic tensions in both Kazakhstan and China.

So far, the US and EU have remained relatively restrained in their responses. In marked contrast to the ongoing aggressive campaign against Russia over Ukraine, US and EU officials voiced concern about the growing influence of Russia in Kazakhstan following its military intervention but fell short of condemning it.

White House Press Secretary Jen Psaki said, “The world will of course be watching for any violation of human rights and actions that may lay the predicate for the seizure of Kazakh institutions, and we call on the CSTO collective peacekeeping forces and law enforcement to uphold the international human rights obligations in order to support a peaceful resolution.” She added that the situation in Kazakhstan would not have an impact on the talks over Ukraine between US President Joe Biden and Putin, which are set to begin on Monday.

A significant factor in the response of the imperialist powers is the fact that they, no less than the post-Soviet oligarchies, are deeply concerned about a potential broader movement within the working class in Kazakhstan and beyond, especially under conditions of a surge of Omicron cases and workers struggles in the US. They are also worried about the threat posed by the unrest to the economic interests of corporations like ExxonMobile and Chevron, which have invested tens of billions of dollars in Kazakh oil fields.

The Washington-based magazine Politico wrote on Friday that, while Russia’s military intervention could raise its influence in Central Asia, “Joe Biden and his team would do well, as hard as it might be, to watch the current horror unfold from the sidelines.” The Financial Times, the mouthpiece of British finance capital, published a favorable profile of Tokayev, noting, “As the country is rocked by protests, the leader must seek stability and escape the legacy of his predecessor Nazarbayev.”

Post Views: 28
Previous Germany’s New Government Could Spell Trouble for the Visegrad Four
Next A World of Killer Robots?