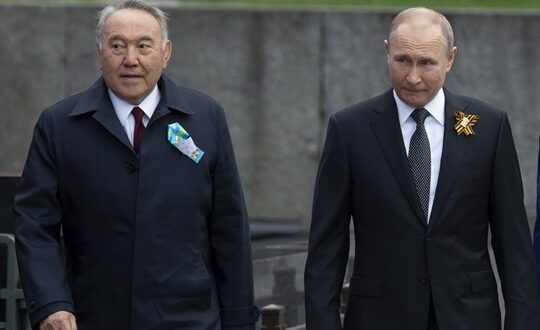 More even than most crises, the events unfolding in Kazakhstan in recent days can be read in myriad ways. On one level, it clearly appears to have resulted in yet another opportunity for Russian President Vladimir Putin to claw back control over domains lost by the Kremlin following the demise of the Soviet Union.

Moscow has been able to accomplish this by falsely pretending the unrest that it helped put down in its Central Asian neighbor was yet another example of what it calls a “color revolution,” meaning an insidious destabilization plot supported by the West.

On another level, the crisis reveals China’s surprising geostrategic weakness in Central Asia. Even after decades of world-beating economic growth and the construction of a new transcontinental railway across Kazakhstan linking China to Europe, Beijing appears to have little meaningful political influence in that country. In the past week, it has been rendered a mere bystander as Moscow sent in troops under the cover of the Collective Security Treaty Organization, or CSTO, a regional organization that it leads, to support President Kassym-Jomart Tokayev.

But it is the internal politics of Kazakhstan that ironically have the broadest global relevance, despite being highly obscure to most of the world due to the nature of the country: vast but geographically isolated and lightly populated, and with only three decades of independence from the Soviet Union.

More than anything else, the unrest in Kazakhstan—which spread last week from small western cities near the country’s oil-producing region to Astana, the commercial capital, where people stormed government buildings—underlines a fundamental predicament that comes with strict authoritarian rule. The more power is invested in an individual, the more uncertain and insecure the transition to a successor inevitably becomes. Today, Moscow feels like it is regaining a measure of lost imperial control by picking a winner in the contest between the past and present rulers of Kazakhstan and using its troops to bolster him. But the same rule will hold one day for Putin’s eventual succession, and for post-Xi Jinping China, as well.

The most fundamental crisis of any monarchy, a system of rule that has predominated throughout most of human history, is the crisis of succession. One kingdom or empire after another has been thrust into chaos or outright demise by the failure of elites to agree on a successor. Often this has been brought about by nothing more complicated than the absence of a male heir, which in most places has been the automatic choice to succeed a sovereign. In other instances, the legitimacy of successors to the crown has been undone by rival claims advanced by competing family lines. This is where monarchy bears the greatest resemblance to modern politics. One need only substitute political clans for bloodlines to begin to imagine how periods of great instability follow regularly after the leadership of domineering, strongman-type rulers.

Kazakhstan’s long-time leader, Nursultan Nazarbayev, attempted a historically familiar ploy to avoid this kind of messiness when he stepped down in 2019, by naming a successor while he was still in good health and his authority was completely unchallenged. Nazarbayev’s ambition to one day die both wealthy and celebrated, a desire as old as the pharaohs, was based on the idea of conserving most of his power after formally leaving office, and this meant ruling from behind the scenes. However, at the first major sign of trouble in the country since he stepped down—triggered by popular anger over a sudden rise in gasoline prices—this arrangement unraveled amid violence, and Nazarbayev’s well-laid plans came to naught.

Nazarbayev’s scheme was anything but original. In fact, its most famous recent application was in Russia itself, where Putin arranged to become prime minister in 2008 after having already served the two-term limit as an all-powerful president. Putin, of course, returned to the presidency after that experiment, and has invested considerable energy ever since in modifying his country’s constitutional arrangements to allow himself to stay in power indefinitely. That a politician as resourceful, not to say devious, as Putin has resorted to such measures reveals that he knows he will find no real security in genuine retirement. Just as importantly, though, what he may or may not have accepted is that there are no guarantees that the political system he has crafted will long outlast him once he is gone.

In fact, there are many reasons to believe that the longer a power-centralizing authoritarian clings to office, the less likely his system, its ideals and the crony class he surrounded himself with will manage to survive politically. That is because power concentrated in an individual, no matter how clever or seemingly careful, directly undermines institutions, and it is institutions—and not personalities—that political systems and indeed stability are built upon.

In the 20th century, cautionary examples of this truth abound, and yet few hard-line authoritarians heed them. The belief in one’s ability to escape the pattern, to prove the exception to the rule, is apparently irresistible. The junk pile of history in this genre is highly diverse in political terms and includes Manuel Noriega of Panama, the Duvaliers of Haiti, the Shah of Iran, Ferdinand Marcos of the Philippines and many others. None were able to find a graceful way off of the throne, never mind one that preserved their influence or historical prestige.

One of my favorite examples is Nicolae Ceausescu of Romania. Even after a week of unrest in his country in the fall of 1989, a time when regime after regime in Eastern Europe had been brought down by popular uprisings in favor of democracy, Ceausescu, who had concentrated power in his own hands to an unusual degree, felt that he was impervious to calls for reform. Responding to the protests in the country’s second city, Timisoara, he gave a speech in front of the headquarters of the parliament, a grandiose building for a body without power.

In response to his opening greetings, the crowd shouted, “Down with Ceausescu!” The dictator’s wife, who stood by his side, had never seen her husband’s authority publicly questioned and responded in shock, saying, “Silence!”

“Hush! Shut up!” Ceausescu murmured to her, not remembering that their voices were picked up on live microphones and broadcast to the entire nation. “Comrades! Sit down quietly,” he resumed to the crowd. By the very next morning, though, when crowds broke into the Central Committee building where Ceausescu had gone into hiding, the man who had ruled Romania with an iron fist for 24 years was gone. Ceausescu and his wife had fled by helicopter, but they were soon captured and executed after a flash trial, never quite grasping what had happened to them.

The lessons of Kazakhstan apply to a great many states in the world today, places whose politics come in widely varying flavors, but which share two characteristics: a strongly centralizing impulse to concentrate authority in the hands of one person, and an aversion to formal and transparent mechanisms of succession. China, where Xi Jinping has undone the country’s informal succession system every bit as much as has Russia’s Putin, is one obvious place to watch out for the eventual consequences. So is tiny Rwanda under President Paul Kagame, a leader long praised in the West, but whose personal authority knows few bounds.

There have always been people ready to praise authoritarianism on the shaky grounds that it suffers none of the inefficiency and slowness of democracy. Like them or not, these cheerleaders say, strongmen and their regimes can get things done. This would be more convincing if there was a long list of examples of such leaders whose accomplishments stood the test of time. What we are mostly left with, instead, is the rubble they leave behind as they depart.

Post Views: 21
Previous From the Jaws of Retreat
Next The U.S.-China Rivalry According to China