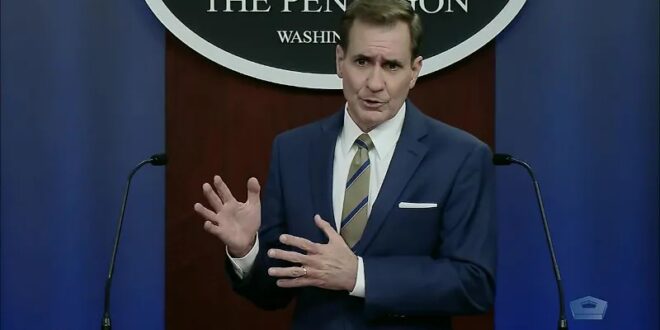 Russia has deployed “a group of operatives” into Ukraine to foment a pretext for another invasion of that country, Pentagon Press Secretary John F. Kirby said during a news conference Friday.

Kirby hastened to say that the U.S. government still believes there is room to solve the problem of the Russian build-up on Ukraine’s border diplomatically. “No one wants to see another invasion and incursion of Ukraine,” he said. “We still … believe that there’s time and space for diplomacy.”

Still, if Russia does invade its neighbor, the United States “will continue to provide security assistance to Ukraine to help them better defend themselves,” Kirby said.

Kirby said the Russian operatives are a part of Russia’s playbook that was used in 2014 when Russia invaded Crimea and later illegally annexed the area. Kirby could not give many details, but said the United States does “have information that indicates that Russia is already working actively to create a pretext for a potential invasion, for a move on Ukraine.”

The Russian operatives are pre-positioned in Ukraine to conduct “what we call a false flag operation — an operation designed to look like an attack on … Russian speaking people in Ukraine, again, as an excuse to go in.”

The United States also has information that Russia is fabricating Ukrainian provocations in state and social media as some sort of pretext for invasion, he said. “We’ve seen this kind of thing before out of Russia,” he said. “When there isn’t an actual crisis to suit their needs; they’ll make one up. So we’re watching for them.”

There were also cyberattacks on Ukrainian government websites. Kirby said it is too early to attribute those attacks on Russia, but noted that it is also in the Russian playbook.

Kirby wouldn’t go into much detail on the operatives themselves, but noted that Russia often “hybridizes” their personnel drawing them from their intelligence communities, their security services or their military.

There are American forces in Ukraine working to advise and assist the Ukrainian military. There are less than 200 Florida National Guardsmen assigned to the mission.

Kirby said the United States believes Russian President Vladimir Putin has not decided on invasion yet. But if there is an incursion, force protection for American personnel remains paramount. “We will make all the appropriate and proper decisions to make sure that our people are safe in any event,” Kirby said.

In Brussels, NATO Secretary General Jens Stoltenberg also said there is room for diplomacy to work. He had met with Russian officials as part of the NATO-Russia Council at the alliance headquarters. “We had a very serious and direct exchange on the situation in and around Ukraine and the implications for European security,” he said. “There are significant differences between NATO allies and Russia on these issues. Our differences will not be easy to bridge. But it is a positive sign that all NATO allies and Russia sat down around the same table, and engaged on substantive topics.”

One Russian demand is that Ukraine not become a member of NATO.

“Ukraine is a sovereign nation,” Stoltenberg said. “Ukraine has the right to self-defense. Ukraine is not a threat to Russia. Russia has the biggest land power in Europe. They are one of two major nuclear powers. They have invested heavily in new, modern capabilities over the last years.”

Russia has also said Ukraine threatens Russia. The secretary general said Russia continues to illegally occupy Crimea and controls the separatists in eastern Ukraine. “The whole idea that, … Ukraine threatens Russia is absolutely to put the whole thing upside down,” he said. “It is Russia that is the aggressor. It is Russia that has used force and continues to use force against Ukraine.

“This crisis is [the] making of Russia,” he continued. “And therefore, it is important that they de-escalate.”