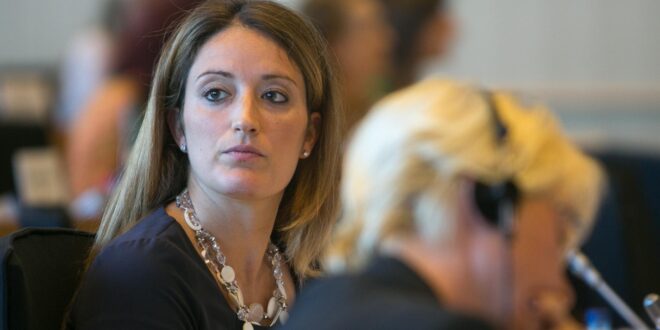 A special and principled person

Roberta Metsola began her political career as a university student campaigning for Malta to join the EU as its smallest state. Less than two decades later, she has been elected to preside over its most important democratic institution.

Former Prime Minister Lawrence Gonzi, said he recognised her talents from her early days and said her contribution in the 2004 EU referendum campaign together with “the professional and ethical standards she consistently displayed”, persuaded the PN that she should be asked to contest the European Parliament elections on the PN ticket.

“I count Roberta as one of this special breed of Maltese who are prepared to make all manner of sacrifices in order to serve their country as best as they can but doing so in a manner that finds the right balance with family life and social commitments,” he said.

“Everybody must agree that this decision speaks for itself and proves – if proof is needed – the validity of Roberta as one of Europe’s most respected political figures,” he said.

“Perhaps this is the time when we should all remind ourselves that Malta has its sons and daughters that can really make us all so proud to be Maltese,” he added.

Metsola always had politics running through her veins. She took up student politics, became a lawyer, an MEP and the European Parliament’s first vice president until she landed the most coveted top seat in the EP.

Born in January, 1979, and raised in Gżira, Roberta Tedesco Triccas went to St Joseph School in Sliema, St Aloysius College sixth form, the University of Malta and later specialised in law and politics at the College of Europe in Bruges as one of the first Maltese to embark on the Erasmus programme.

She admits it was this experience that helped her shape her view on Europe.

In her student years, Metsola formed part of SDM (Studenti Demokristjani Maltin), the National Youth Council and was active in the Nationalist Party’s youth wing, MŻPN, before being elected as secretary general of the European Democrat Students.

In 2002, she was elected vice-president of the Youth Convention on the Future of Europe which paved the way to her being closely involved in the negotiation and drafting of the European Constitutional Treaty and, later, the Lisbon Treaty.

Metsola served within the party’s international secretariat and actively campaigned for a ‘yes’ vote in the 2003 EU membership referendum before unsuccessfully contesting the 2004 European Parliament elections.

In October that year, she joined the Permanent Representation of Malta to the European Union as the legal and judicial cooperation attaché, where she helped negotiate the Lisbon Treaty, serving under the wing of the former permanent representative to the EU, Richard Cachia Caruana

She again unsuccessfully contested the 2009 MEP election alongside her Finnish husband Ukko, who contested the same election in Finland. In 2012, she joined the European External Action Service as a legal adviser.

She finally found her way into the European Parliament in April 2013 when she successfully contested the casual election to fill the seat vacated by former party leader Simon Busuttil, becoming one of Malta’s first female MEPs.In 2014, she was elected again on behalf of the PN with more than 38,000 votes, a then record for a female candidate in Malta.

She has admitted that she had planned to contest the leadership of the PN in 2020 but said she had decided against it because she didn’t want a long leadership contest.

“Some ceilings need a few more cracks before they can be smashed through,” Metsola wrote on Facebook at the time. The position was eventually taken up by Bernard Grech, who is fighting to make any inroads into the success of the governing Labour party.

Known as a bridge-builder, one of her first formal dossiers in the European Parliament was to represent the EPP Group on the negotiations for a roadmap to end discrimination and homophobia led by Green MEP Ulrike Lunacek.

Metsola was a leading voice on the need to respect the rule of law, the fight against corruption, the need for migration reform, press freedom and the need to bring European decision-making to a wider European audience

In December 2019, Metsola made headlines when she was pictured refusing to shake hands with Joseph Muscat before a meeting with an EP delegation. The meeting happened in the midst of the Daphne Caruana Galizia murder fallout.

“If he thinks he can try to brush off responsibility he is sorely mistaken. Get out now, before you do irreparable damage to the country,” she tweeted after the meeting.

She was the EPP Group’s coordinator in the Committee on Civil Liberties, Justice and Home Affairs, between January 2017 and 2020. She was also the parliament’s rapporteur on the European Border and Coastguard Regulation in 2019 and was co-rapporteur on an anti-SLAPP report last year.

In late 2020, Metsola was elected as the European Parliament first vice president and is now intrinsically involved in the ongoing conference on the ‘Future of Europe’.

A mother of four boys, Luca, Alec, Marc and Kristian, the eldest being 14 and the youngest four, Metsola has a passion for cooking and baking, which she says she inherited from her paternal grandfather who was a chef with the Royal Navy.