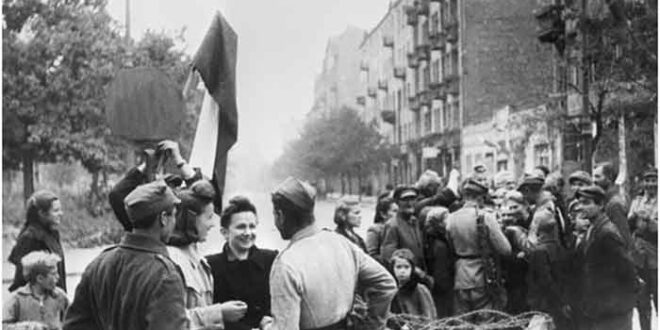 The 77th Anniversary of the Defeat of Fascism in Europe in the month of May 1945; approaches us.

Below is a picture of Soviet Troops entering Warsaw and being greeted by the residents of the city.

Contrary to Public Perception (ingrained into our Collective Psyche by Big Media and Her Relentless Efforts to Re-Write History); the Soviets were not seen as the Enemy but rather as Liberators by the people of Poland.

The carnage wreaked upon Europe is still visible even today as you walk around in any direction towards the forests and heavy woodlands of the seemingly quiet villages of South Western Poland, and; where, inevitably, you will come across huge unmarked graveyards of those killed 77 years ago.

Till the mid1950s, Germany; and especially Berlin, was just a huge pile of rubble that took nearly 20 years to clear.

The reason why the cities of Central Europe and Berlin in particular are so sparse of complex layouts is because they had to be totally rebuilt from the ruins of the War in the spirit of the 1960s Post Modern Architectural Design Movement that emphasised a more Socialist Concept of City Planning and Urban Living.

The Soviet Red Army fought inch by inch all over Europe in an Epic Struggle that consumed the lives of 21,000,000 Soviet Citizens; 6,000,000 European Jews; countless Europeans and which in turn, required the services of 4,000,000 Volunteer Soldiers from British Occupied India, the emphasis being on the term – Volunteer and not Conscripted, in a peculiar sub-plot where they signed up to Fight Fascism when they themselves were Proto-Slaves under the Boot of Colonial Occupation in their own lands.

The Drums of War are being beaten again; by the same Corporatists, the same Political Opportunists, by the same Revisionist Elements who have Deeply Embedded Hatreds and Endemic Religious Intolerances which are a mirror of common hallmark throughout Europe.

77 years in the Grand Scheme of Things, is not so long ago, (it is almost like yesterday), yet, today, it seems that everywhere you look in the World around us, there is a concerted effort being made to re-initiate the events that led up to 1939, in the hope that, somehow, second time around there will be a fortuitous outcome for a Global Fascist Utopia.

Below is a picture of Soviet and Polish Soldiers in Warsaw and behind them in the background you can see the total devastation wrecked upon the city. Today as you walk around the Polish Capital, you will gradually begin to realise that hardly any structure is from pre-1939 as the entire city was flattened in waves of colossal repetitive firebombing, which required that every single structure that you see today having to be rebuilt in the 1960s onwards, from the bombed out ruins.

People talk about the destruction of Berlin but very few even know about Warsaw, which was partially obliterated from the face of the Earth.

The Drums of War are getting louder. The Youth of the Indian Republic need to be aware of the path of events that led up to 1939 as Desperate, Semi-Literate and Partially Insane, Politicians clamour to replicate European Intolerance upon a Diverse Asian Society that does not really understand anything apart from their daily struggles to somehow get through the day, under stifling bureaucracy and overt corruption.

Religious and Racial Harmony, Equality and the Dignity of being simply Humane are part of the texture and fabric of the vast expanse of Hindustan, from Kandahar to Rangoon, and these principles are simply taken as a given.

Wrenching them apart in order to facilitate the return of the East India Company in the name of Profit Maximisation will not end well.

Long Live the 77th Year of The Defeat of Fascism, and may we all work, in our own little ways to endeavour that this Apocalypse does not repeat to befall our children and grandchildren.

Post Views: 169
Previous After a Year of Biden, Why Do We Still Have Trump’s Foreign Policy?
Next Biden promises additional troops, sanctions if Russia invades Ukraine