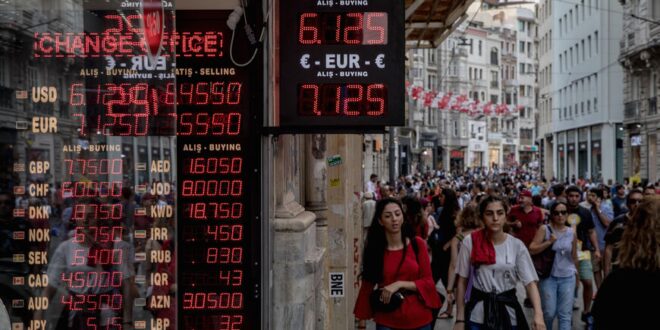 The pro-government business association MUSIAD has stood behind Erdogan’s controversial economic policies but appears concerned that both borrowing costs and foreign exchange prices remain above the desired levels.

The Independent Industrialists and Businessmen Association (MUSIAD), founded in 1990 as an ally of Turkey’s political Islam movement, has stood behind President Recep Tayyip Erdogan and his party through the country’s economic turmoil. But recent statements from the group reflect apprehension over rising borrowing costs and the slump of the Turkish lira.

The association, which boasts more than 11,000 members representing some 60,000 enterprises with nearly 1.8 million employees, has displayed full loyalty to Erdogan and enjoyed his auspices in return. Like many other economic actors, the MUSIAD had voiced concerns over the lira’s freefall after the central bank began cutting rates in September despite soaring inflation and called for measures to curb the surge of foreign exchange prices, which, in Turkey’s import-reliant economy, meant increasing costs for entrepreneurs.

The association lent fervent support to the measures Erdogan announced Dec. 20 to prop up the lira, and some of its members even visited shopkeepers to promote the government’s policies. But only a month on, the group appears displeased and concerned that both borrowing costs and foreign exchange prices remain above the desired levels.

Many now wonder whether the MUSIAD’s support for Erdogan and his Justice and Development Party (AKP) will continue even if the group’s expectations of economic stability remain unmet. But given the group’s corporatist relationship with the government, it seems fair to say that MUSIAD members have largely tied their fate to that of Erdogan and their loyalty is unlikely to easily wane.

Addressing MUSIAD leaders in early January, Treasury and Finance Minister Nureddin Nebati — the third holder of the post since Erdogan assumed sweeping executive powers in July 2018 — hailed MUSIAD members as entrepreneurs who make their profits through “halal ways,” referring to a religious notion of permissible or legitimate acts according to Islam. “Rest assured,” he told his audience, pledging a new era of economic predictability in which “everyone will gain and be able to make [forward-looking] calculations.”

The minister’s praise of the MUSIAD’s “halal” entrepreneurship did not go without criticism. Economist and former politician Nesrin Nas, for instance, tweeted, “There is an insinuation here that the earnings of those outside the MUSIAD are not halal. Then, what about taxing only halal earnings and not letting any non-halal revenues into the treasury?”

In the acronym of the association, the first syllable officially stands for “mustakil” (independent) in Turkish. But everyone knows that it is a veiled abbreviation of “Muslim.” Thus, the group brings together those who identify as “Muslim industrialists and businessmen.” It has sought to promote solidarity between its members, who are organically linked to political Islam, and strengthen ties with like-minded political parties, including the predecessors of the AKP. The rise of political Islam in Turkey began at local administrations in the 1990s, culminating in the AKP’s ascent to power in 2002, with MUSIAD members often prioritized as recipients of public tenders and other public resources. MUSIAD members have flourished and grown under the AKP’s nearly two-decade rule, but other favorites of Erdogan — business groups such as Cengiz, Limak and Kalyon that have taken the lion’s share from public-private partnership projects — do not belong to the MUSIAD and have a different relationship with the president.

MUSIAD members have maintained support for Erdogan amid economic turmoil, acting as natural allies of the AKP, though their businesses have also felt the impact of growing economic volatilities since 2018.

The MUSIAD was a forefront supporter of the central bank’s rate cuts, which have totaled 500 basis points since September and brought the bank’s policy rate to 14% despite an annual inflation of more than 36%. MUSIAD chairman Mahmut Asmali said in November, “The more interest rates drop, the more production costs will decrease as a result of easing loan costs. And that will help the decrease of inflation.” The statement reflected the chairman’s faith in Erdogan’s unorthodox view that high interest rates cause high inflation — the reason behind Erdogan’s pressure on the central bank to cut rates.

Asmali has backed also the government’s “new model” for the economy, according to which Turkish exporters would take advantage of the depreciated lira to boost foreign sales and bring in more hard currency to help narrow the country’s current account deficit. “The MUSIAD backs this. Production wheels have stalled in Turkey for years because of low exchange rates, and we have all become dependent on imports,” he said.

As for the exchange rate that the MUSIAD favors, Asmali said this in November: “A reasonable rate would be a dollar trading for 8.5 to 9 liras at the year-end. The current rate of 12 to 13 liras is too high.” The lira’s nosedive to 18 versus the dollar in December was nothing less than a nightmare for the MUSIAD.

Then came the government’s Dec. 20 intervention, for which the MUSIAD sounded grateful, even as critics disputed the controversial means that helped the lira rebound. “The fast appreciation of the lira following the announcement of the lira-incentivizing package on Dec. 20 has significantly eased the pressure of cost inflation on prices at the domestic market. We believe this process is a milestone for the Turkish economy,” Asmali said in early January.

Yet the great expectations of pro-government business people have yet to materialize, especially on the interest rate leg. “Unfortunately, the [central bank’s] 14% policy rate has not reflected on the real sector. Loan interests have soared to about 30%. Deposit rates have increased as well. And with deposit rates increasing that much, loan rates are going up as well,” Asmali said earlier this month.

Interest rates have shot above 25% on commercial loans and above 30% on consumer loans, while the lira has lost some of its initial gains, trading at about 13.6 versus the dollar Jan. 19.

The MUSIAD appears to have influenced also the hike on the minimum wage last month. Asmali had said the minimum wage should be raised by 41.5% to 4,000 liras with the burden shared between employers and the government. Erdogan eventually decided on a 50% hike that brought the minimum wage to 4,250 liras ($314).

The MUSIAD now seems to promote a loan expansion similar to the one several years ago when Ankara sought to stimulate the economy through a Treasury-backed Credit Guarantee Fund (CGF), set up in 2017 to guarantee loans to businesses. The association, which held an event on “CGF facilities” last week, appears ready to stand by Erdogan in such a venture, which would amount to adding fuel to the flames of inflation.