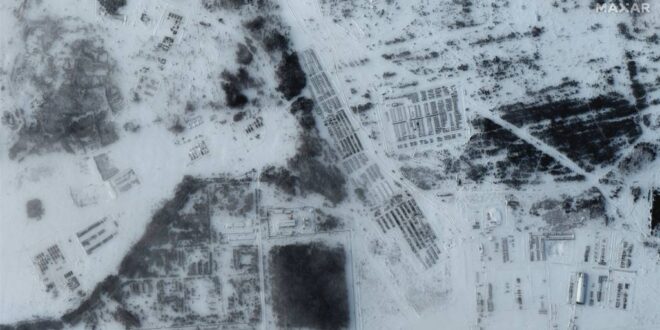 The images, released by satellite imagery company Maxar Technologies, show equipment and troops as close as eight miles to Ukraine in Klimovo and about 18 miles from the border in Klintsy.

Maxar says the images show key locations where additional troops and forces have recently been deployed. The Pogonovo training area, located near Voronezh, is about 102 miles near the Ukraine border.

Russian military activity has been increasing in recent weeks, with officials announcing Tuesday that it would send troops to Belarus for war games.

The head of Ukraine’s defense intelligence agency told Military Times in November that Russia could launch an attack through Belarus.

White House Press Secretary Jen Psaki underscored the urgency for de-escalation, as well, ahead of Secretary of State Antony Blinken’s trip to Ukraine. Blinken is expected to meet with Russian Foreign Minister Sergey Lavros in Geneva on Friday.

Russia has requested guarantees that NATO deny membership to Ukraine and other former Soviet countries, as well as roll back military deployments in Central and Eastern Europe.

In a press conference Wednesday, President Joe Biden said the U.S. would not withdraw troops in order to de-escalate tensions. Biden also promised to send additional troops to eastern European NATO member countries if Russia moves forward with an invasion of Ukraine.

Post Views: 124
Previous Russia announces sweeping naval drills amid Ukraine tensions
Next NATO should shut the door, but not because Russia said so