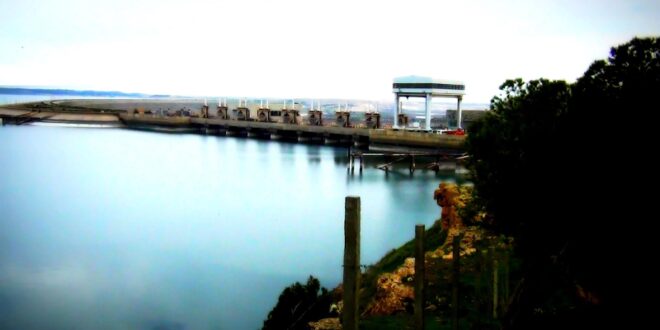 Five years following a potentially catastrophic incident that could’ve inundated Islamic State’s former capital Raqqa and many towns downstream Euphrates River in eastern Syria and caused more deaths than the deployment of any weapon of mass destruction, the New York Times has finally mustered enough courage to report [1] that at the height of US-led international coalition’s war against Islamic State in Syria and Iraq, US B-52 bombers struck Tabqa Dam with 2,000-pound bombs, including at least one bunker-busting bomb that fortunately didn’t explode.

In March 2017, alternative media was abuzz with reports that the dam was about to collapse and entire civilian population downstream Euphrates River needs to be urgently evacuated to prevent the inevitable catastrophe. But the US national security establishment had issued a gag order to mainstream media “not to sensationalize the issue.” The Times deserves a pat on the back for bringing the facts to the light, albeit five years too late.

The bombshell report notes that the dam was contested between US-backed and Kurdish-led Syrian Democratic Forces and the Islamic State. A firefight broke out in which SDF incurred heavy casualties. It was then that a top secret US special operations unit called Task Force 9 called for airstrikes on the dam.

“The explosions on March 26, 2017, knocked dam workers to the ground. A fire spread and crucial equipment failed. The flow of the Euphrates River suddenly had no way through, the reservoir began to rise and authorities used loudspeakers to warn people downstream to flee.

“The Islamic State group, the Syrian government and Russia blamed the United States, but the dam was on the US military’s ‘no-strike list’ of protected civilian sites, and the commander of the US offensive at the time, then-Lt. Gen. Stephen J. Townsend, said allegations of US involvement were based on ‘crazy reporting.’”

It’s worth noting that it was the same rogue Pentagon General Stephen J. Townsend, currently the commander of US AFRICOM and then the commander of Combined Joint Task Force (CJTF) – Operation Inherent Resolve (OIR) responsible for leading the war against the Islamic State in Syria and Iraq, who was responsible for another reckless confrontation an year later that brought two global powers engaged in the Syrian conflict almost to the brink of full-scale war.

On February 7, 2018, US B-52 bombers and Apache helicopters struck a contingent of Syrian government troops and allied forces in Deir al-Zor province of eastern Syria that reportedly [2] killed and wounded scores of Russian military contractors working for the Russian private security firm, the Wagner Group.

The survivors described the bombing as an absolute massacre, and Moscow lost more Russian nationals in one day than it had lost during its entire military campaign in support of the Syrian government since September 2015.

Washington’s objective in striking Russian contractors was that the US-backed and Kurdish-led Syrian Democratic Forces (SDF) – which is mainly comprised of Kurdish YPG militias – had reportedly handed over the control of some areas east of the Euphrates River to Deir al-Zor Military Council (DMC), which was the Arab-led component of SDF, and had relocated several battalions of Kurdish YPG militias to Afrin and along Syria’s northern border with Turkey in order to defend the Kurdish-held areas against the onslaught of the Turkish armed forces and allied Syrian militant proxies during Ankara’s “Operation Olive Branch” in Syria’s northwest that lasted from January to March 2018.

The US Air Force responded with full force, knowing well the ragtag Arab component of SDF – mainly comprised of local Arab tribesmen and mercenaries to make the Kurdish-led SDF appear more representative and inclusive in outlook – was simply not a match for the superior training and arms of the Syrian troops and Russian military contractors, consequently causing a carnage in which scores of Russian nationals lost their lives.

A month after the massacre of Russian military contractors in Syria, on March 4, 2018, Sergei Skripal, a Russian double agent working for the British foreign intelligence service, and his daughter Yulia were found unconscious on a public bench outside a shopping center in Salisbury. A few months later, in July 2018, a British woman, Dawn Sturgess, died after touching the container of the nerve agent that allegedly poisoned the Skripals.

In the case of the Skripals, Theresa May, then the prime minister of the United Kingdom, promptly accused Russia of attempted assassinations and the British government concluded that Skripal and his daughter were poisoned with a Moscow-made, military-grade nerve agent, novichok.

Sergei Skripal was recruited by the British MI6 in 1995, and before his arrest in Russia in December 2004, he was alleged to have blown the cover of scores of Russian secret agents. He was released in a spy swap deal in 2010 and was allowed to settle in Salisbury. Both Sergei Skripal and his daughter have since recovered and were discharged from hospital in May 2018.

In the aftermath of the Salisbury poisonings in March 2018, the US, UK and several European nations expelled scores of Russian diplomats and the Trump administration ordered the closure of the Russian consulate in Seattle.

In a retaliatory move, Russia also expelled a similar number of American, British and European diplomats, and ordered the closure of American consulate in Saint Petersburg. The number of American diplomatic personnel stationed in Russia drastically dropped from 1,200 before the escalation to 120 now, and the relations between Moscow and Western powers reached their lowest ebb since the break-up of the former Soviet Union and the end of the Cold War in December 1991.

A month after the Salisbury poisonings in March 2018, an alleged chemical weapons attack took place in Douma, Syria, on April 7, 2018, and Donald Trump ordered a cruise missile strike in Syria on April 14, 2018, in collaboration with the Theresa May government in the UK and the Emmanuel Macron administration in France.

The strike took place little over a year after a similar cruise missile strike at al-Shayrat airfield on April 6, 2017, after an alleged chemical weapons attack in Khan Sheikhoun, though both the cruise missile strikes were nothing more than a show of force, and the alleged chemical weapons attacks were at best dubious, as subsequently reported by credible sources.

But the fact that out of 105 total cruise missiles deployed in the April 14, 2018, strike against a military research facility in the Barzeh district of Damascus and two alleged chemical weapons storage facilities in Homs, 85 were launched by the US, 12 by the French and 8 by the UK aircrafts demonstrated the unified resolve of the Western regimes against Russia that could’ve escalated into Third World War between two global powers, a doomsday scenario far more frightening than the collapse of Tabqa Dam on Euphrates River.