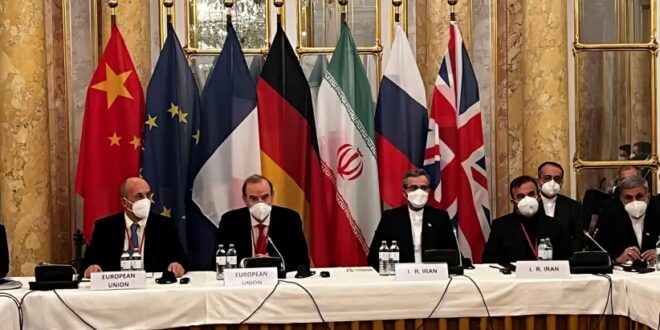 The report shows how Iran has taken an emboldened stance, and that Israel is not properly preparing for the worst.

Iran and world powers are unlikely to reach a deal to resolve the nuclear standoff, a report from the Institute for National Security Studies (INSS) issued on Monday states.

According to the report, the Islamic Republic feels emboldened by its nuclear achievements, and backing from various countries and will not be willing to return to the deal’s nuclear limits without some sweeteners that are beyond what the US is willing to provide.

The report warns that Israel is not properly mobilizing its various military, diplomatic, economic and technological powers to achieve its national interests based on a clear and coherent strategy.

“Tehran represents the most serious external threat to Israel, first and foremost due to Iran’s quest to achieve military nuclear capability,” the report reads.

“Israel’s structural inability to handle on its own all the challenges posed by Iran’s conduct, as well as the growing need to increase coordination with the United States and tighten the special relationship with it – whether or not the agreement is reached between Iran and the great powers on its nuclear program,” it emphasized.

Along those lines, INSS said it was critical that Jerusalem prepares its military options for deterring Iran from crossing the nuclear threshold.

The report then stated that the Islamic Republic’s nuclear progress “has given Iran the shortest time ever to break out to nuclear weapons – if the regime in Tehran decides to do so,” which “reinforces the temptation not to return to the nuclear agreement without considerable rewards.”

The Biden administration “might have neither the ability nor the desire to grant them. Also, Iran’s confidence and readiness to attack its enemies through its proxies has increased.”

Striking a pessimistic tone, the report said next, “Israel… is at a strategic impasse regarding the Iranian nuclear issue. The various possible scenarios for the dialogue between Iran and the great powers, whether resulting in a partial agreement or lengthy foot-dragging or even breakdown of talks, are all negative for Israel.”

Still, the report cautioned that Israel should avoid opposing a return to the nuclear deal because such a position “will leave Israel isolated with only the military option for preventing Iran from attaining a nuclear weapon.”

In addition, it said that “Iran continues with its program of regional subversion, including its efforts to surround Israel with the threat of attack, especially through its precision missile project for Hezbollah in Lebanon and its proxies in Syria.”

But on top of the missiles and rockets threat, “Iran is equipping its proxies with thousands of unmanned aerial attack vehicles [UAVs], with a range that enables them to penetrate deep into Israel’s skies from all fronts.”

SURPRISINGLY THOUGH, there was less discussion of the threat from Hezbollah than in past years, possibly reflecting that INSS views that threat as even less imminent than in the recent past.

The report addressed the Palestinian issue next, saying the country could not rely merely on passive conflict management since current trends could “drift toward a one-state reality” that could undermine “the vision of Israel as a Jewish, democratic, secure and moral state.”

Ignoring the Palestinians as a long-term time bomb would be delusional, according to the report, which said that the May 2021 war with Hamas, the boiling friction in the West Bank and the ongoing weakness of the more moderate Palestinian Authority is a recipe for escalating future conflict.

In addition, the report warned that the ongoing conflict with the Palestinians continues to undermine “Israel’s international political and legal standing.”

Recognizing the ideological limits of the current government, the report’s recommendations to create conditions for economic prosperity and to set the stage for vague future diplomatic processes were less ambitious than some past reports which included concrete proposals to withdraw from certain parts of the West Bank.

Further, Israel has been unable to untangle the web of dilemmas in Gaza from improving the humanitarian situation to avoiding security escalation to pressing for the return of prisoners and missing persons held by Hamas to preventing Hamas “from achieving further military and political control.”

One of the major security challenges the report focused on, even though it is not a conventional physical threat, was “an intensification of trends of polarization between different groups, incitement, and weak governance, particularly in uncontrolled enclaves, which compound the erosion of trust in state institutions.

“All these constitute a substantive threat to social resilience and national security,” the report says.

Specifically, the report flagged “changes in norms in the wake of the COVID-19 pandemic and increasing concerns over the resilience of liberal democracies.”

In parallel, the report said that there was a growing trend of the Police being unable to hold back ethnic violence between extremist Jews and Arabs.

Regarding relations with the US, the report expressed concern that two issues related to China could dilute Washington’s support for and attentiveness to Israel and to the Middle East in general.

At one level, it said that Israel was caught directly in the middle of contradictory and conflicting wishes from China and the US in the economic and technology arenas.

On another level, the report stated that even if Jerusalem and Washington were more on the same page than they actually are, the Biden administration and America in general simply do not have the same headspace to deal with and assist Israel as in the past. This is because they are escalating their focus on competing with China on a range of playing fields.

In a similar vein, the report expressed concern that the Biden administration was much less motivated and focused on expanding on the success of the Abraham Accords normalization process.

The report strongly recommended that the government work on strengthening what was once strong, but has become a shakier consensus of bipartisan support for Israel among both Democrats and Republicans.

Moreover, the report said that Israel should more effectively capitalize on its peace deals with Egypt and Jordan while trying to reduce friction with Turkey.