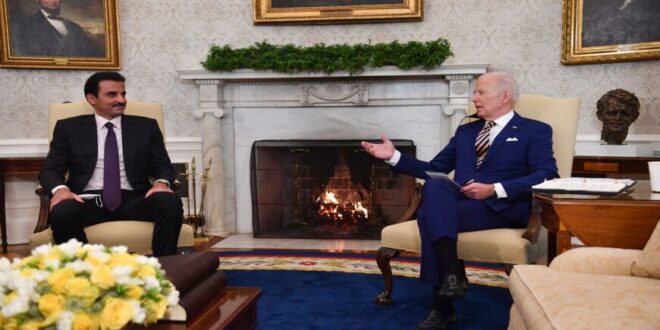 Iran on the agenda as Qatar emir meets Biden

There is potential Doha could play a role in brokering a US-Iran prisoner exchanging following press reports of Iran-Qatar talks on the topic.

Qatar’s ruling emir is the first ​​Gulf leader to visit the White House since Biden took office last year. On Monday, he met with senior US officials for talks covering energy security in Europe, support for Afghanistan and the Iranian nuclear agreement, according to senior administration officials who briefed reporters on Sunday.

Four US citizens — Siamak Namazi, Baquer Namazi, Morad Tahbaz and Emad Sharghi — remain behind bars in Iran on groundless spying and national security charges. Washington and Tehran have conducted indirect discussions on the prisoners that the Biden administration has described as separate from the nuclear talks.

But last week, US Special Envoy for Iran Robert Malley signaled that a revived nuclear agreement was unlikely to occur without the Americans’ release.

“The cat is out of the bag as to how the Biden administration sees the hostage and nuclear tracks with Iran,” said Behnam Ben Taleblu, a senior fellow at the Foundation for the Defense of Democracies. “To put it differently: There is more linkage than meets the eye.”

During a separate Jan. 11 meeting in Doha, Amir-Abdollahian reportedly asked Qatar to help broker the release of the Americans and other dual nationals held in Iran, Reuters reported.

State Department spokesperson Ned Price declined to comment Monday on a possible Qatari role, but said the release of Americans and third-country nationals detained in Iran remains a “top priority.”

“It is very hard for us to imagine a return to the [Joint Comprehensive Plan of Action] while four innocent Americans are behind bars or detained in Iran,” a senior State Department official told reporters on a call Monday.

Why it matters: Several Gulf countries had called on the Biden administration to first consult with them before returning the United States to the Iranian nuclear agreement that former President Donald Trump abandoned in 2018. After eight rounds of talks in Vienna, prospects have dimmed for a “longer and stronger” deal that would address some Gulf concerns, including Iran’s ballistic missile program and support for regional proxies.

“It is good optics for the Biden administration to be clearly, very publicly engaging with a Gulf security partner at this time,” said Annelle Sheline, a research fellow in the Middle East program at the Quincy Institute for Responsible Statecraft.

But Gulf powerhouses “Riyadh and Abu Dhabi may not feel all that reassured that Doha is in the room” and will raise their same concerns, including over Iran’s ballistic missiles.

Know more: Historically neutral Oman helped coordinate backchannel talks between the United States and Iran that paved the way for the 2015 nuclear deal and the release of five American prisoners. Switzerland, which acts as the US protecting power in Iran, has also played a role in securing the release of US citizens.

Qatar has a track record of successful mediation between the United States and its adversaries, including in Afghanistan where Doha now formally represents American interests.

In 2014, Qatari intermediaries negotiated the release of US Army Sgt. Bowe Bergdahl in exchange for five Afghan Taliban detainees held at the Guantanamo Bay prison. In 2020, the Qatari capital served as the venue for a historic deal signed by the United States and the Taliban, which set the stage for a prisoner swap between the Afghan government and the insurgents.

What’s next: Prisoner advocates are hopeful the Qataris could play a similar role as a go-between with Iran. “It looks like things are moving,” said Nizar Zakka, a Lebanese resident of the United States who was detained by Iran from 2015 to 2019. Earlier this month, Zakka held what he described as an “encouraging” meeting with Malley in Vienna and said he was left with the understanding that the United States won’t agree to a nuclear deal unless the Americans are freed.