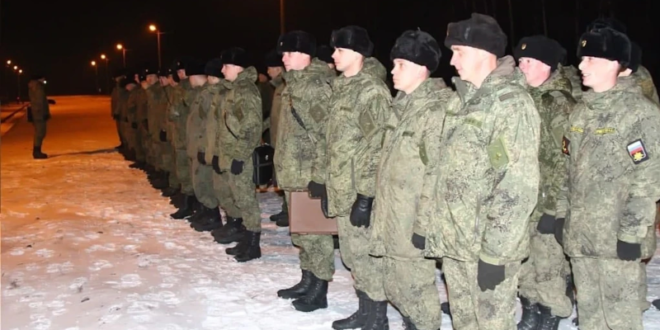 Will Belarus Be Springboard For Russian Incursion Into Ukraine?

Fears that Russia will use Belarus to invade Ukraine are growing as Minsk announced that it was deploying troops to conduct military exercises with Moscow near the Ukrainian border.

President Alexander Lukashenko said this week that he was preparing to send “a full contingent of Belarusian troops” to the nearly 700-mile border with Ukraine. Russian troops began massing in Belarussian territory on January 17 ahead of joint manoeuvres planned for next month.

The situation has led Kyiv and Minsk to the worst point in their relationship since the countries first gained independence 30 years ago.

Kyiv has been particularly cautious towards taking steps against its neighbour following the 2020 disputed presidential elections and subsequent uprising. Ukraine never introduced large-scale sector-based sanctions against Belarus, instead limiting itself to personal bans without jeopardising their overall economic relationship. Statements made by Ukrainian officials on Belarus were also often more restrained, compared to those from EU politicians.

Kyiv had strong strategic reasons for holding this position. In spring 2021, officials admitted in an off-the-record meeting with journalists that they considered trade with Belarus to be a protective measure against the appearance of Russian troops on the Ukrainian-Belarusian border.

Indeed, in the face of international sanctions and increased isolation, Minsk initially did refuse to bow to Russia’s wish that it recognises the independence of the breakaway republics of Abkhazia, South Ossetia and Crimea. Lukashenko also repeatedly stated that tanks would never enter Ukraine from Belarus.

For Belarus, this multi-vector approach was economically beneficial. The country has a trade surplus with Ukraine, with the latter a key importer of petroleum products, including the diesel which fuels the Ukrainian army.

In recent years, Belarus also increased its supplies of bitumen to Ukraine, which has been essential for Zelensky’s large-scale infrastructure projects.

The turning point in this mutually beneficial arrangement seemed to come in June 2021 after Belarussian authorities forced the landing of a Ryanair plane to arrest opposition leader Roman Protasevich.

Ukraine’s subsequent decision to ban Belarusian flights from its airspace surprised many, especially since it came before the EU’s own flight ban. Following this decision, Minsk began to change its approach and make concessions to Russia on crucial issues related to Kyiv.

The first was the decision to establish military training centres, which Kyiv believes to be a disguised approval for the opening of Russian army bases in Belarus.

The next point of conflict between the two countries was the migration crisis created by Lukashenko in his effort to pressurise the EU.

Many in Kyiv feared that some migrants would try to use Ukraine as an alternative transit route rather than approaching the Polish and Lithuanian border. This would have strained Ukraine-European relations, and most importantly, jeopardised the visa-free regime the country currently enjoys with the EU.

Iryna Sushko, the executive director of the Europe Without Barriers analytical centre, said that while this threat might not materialise, it had stirred serious disquiet among the Ukrianina public.

“The migrants are not eager to stay in Ukraine, although some of them probably have the right to apply with such a request,” she continued. “In addition, the border with the EU is protected by Ukraine much better and without the help of border guards, as it was in Belarus, and it will be impossible to arrange massive breakthroughs into the European border.”

However, the fear of an influx of asylum seekers was in itself enough to stir public sentiment “and the statements of Ukrainian politicians regarding the Belarusian authorities gradually became tougher,” Sushko concluded.

In exchange for Russia’s support, Lukashenko abandoned his neutral stance to pledge that the Belarusian army was ready to fight alongside Russia in Donbas, eastern Ukraine.

According to Ukrainian intelligence data, the first real threat of the Russian attack from Belarus emerged in autumn 2021.

“Based on the information available to us, the military system of Belarus has already been fully integrated into the Russian one, unlike the situation in spring,” Mariana Bezuhla, a lawmaker from the ruling Servant of the People party and deputy head of the parliamentary committee on national security, defence and intelligence, told IWPR last year.

Despite the tensions, Kyiv has refrained from a complete rupture of ties with Minsk. According to Maria Avdeeva, an expert at the International Strategic Action Network for Security, this is due to fears that such a move would only push Belarus closer to Russia.

“In addition to trade benefits, the breakup will make Lukashenko even more dependent on the Russian Federation and will facilitate further integration of Belarus,” she said. “This is quite an unprofitable scenario for Ukraine, as it additionally increases the risks on our northern border.”

This logic explains Kyiv’s restrained actions even after Lukashenko made the move to recognise Crimea in November 2021 and even suggested visiting the area with Russian President Vladimir Putin.

“We have a certain agreement with Putin that we will spend some time in Crimea … We talked about it three times. It is for him to decide, when it is convenient for him; it is warm and even perfect there. I told him – I will fly as soon as I am invited,” Lukashenko said.

These statements represent a serious departure from Minsk’s previous policy of maintaining relations with both Kyiv and Moscow, but the response of officials in Kyiv remained measured.

“There is no point in assessing every manifestation of the ‘stream of consciousness’ regularly carried out by Alexander Lukashenko on various media platforms,” said Ukrainian foreign minister Dmytro Kuleba, adding that Kyiv would continue to “evaluate” the Belarussian leader’s actions.

The moment of truth might come amidst the joint military drills to be held by Belarus and Russia in February 2022. A substantial number of troops and Russian military equipment has already arrived in Belarus, correlating with Western intelligence data leaked to the media that sees Belarus as one of the springboards for any Russian intrusion into Ukraine.

This risk is also considered quite high in the United States, which issued an explicit warning to the Belarusian authorities.

“In recent days, we have also made it clear to Belarus that if it allows its territory to be used for an attack on Ukraine, it will face a swift and decisive response from the United States, our allies and partners,” state department spokesman Ned Price said on January 25.

Even if such a scenario can be avoided, the relations between Kiev and Minsk seem to have reached a point of no return.

Post Views: 271
Previous Biden’s Borders: The Threat to America and the Threat to the Free World
Next Azerbaijan To Europe’s Rescue?