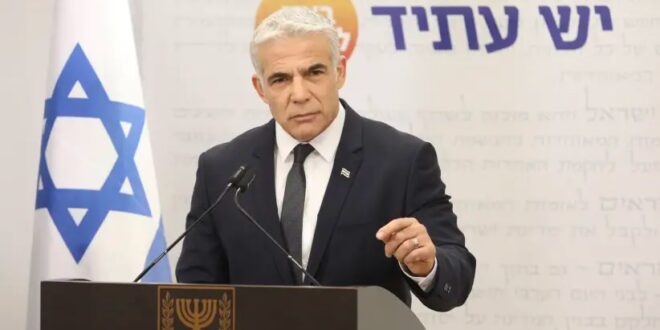 FM Yair Lapid said that he doesn’t think there will be a violent conflict between Ukraine and Russia.

The Foreign Ministry summoned Ukraine’s ambassador for a reprimand on Thursday, after the diplomat accused Foreign Minister Yair Lapid of repeating Russian rhetoric.

Lapid said a day earlier that his evaluation is that he “doesn’t see a violent conflict happening soon; I don’t think a world war will break out” between Russia and Ukraine.

The Foreign Minister’s statement in an interview with Walla differed from that of US Secretary of State Antony Blinken, who has warned of an imminent Russian invasion of Ukraine.

Lapid also said the tensions between Russia and Ukraine are especially complicated for Israel in light of the fact that there is a Jewish community in Ukraine.

“We are concerned that it is distracting [American] attention from the nuclear talks in Vienna,” Lapid added.

Ukrainian Ambassador to Israel Yevgen Korniychuk took issue with Lapid using the term “conflict” instead of war to describe the situation.

“It is a shame that Mr. Lapid has not noticed the war in the center of Europe which lasts for eight years already,” Korniychuk wrote on Facebook. “Unfortunately, Mr. Minister reiterates rhetoric of Russian propaganda and ignores the disturbing messages from his own strongest allies – USA, Britain and EU – regarding the high possibility of a full-scale Russian military invasion into Ukraine in coming weeks.”

As for Iran, Korniychuk said, “If a full-scale war breaks out in Europe, Israel will be left face-to-face with the Iranian threat.”

Lapid is expected to speak with Russian Foreign Minister Sergei Lavrov in the coming days, and Korniychuk called on him to speak to the Ukrainian side as well, “to see the real picture instead of using Russian clichés.” He also called on senior Israeli officials to show solidarity by visiting Kyiv.

Jerusalem has not yet set a date for Korniychuk’s reprimand by the Foreign Ministry’s deputy director-general for Eurasia.