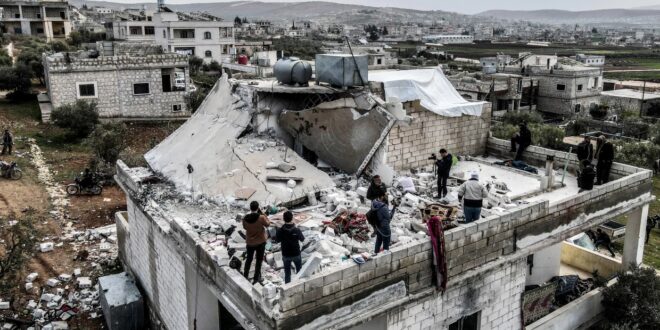 U.S. kills ISIS leader, but another is already waiting in the wings

Abu Ibrahim al-Hashimi al-Qurayshi’s successor has yet to be revealed, but he’ll most likely be another Iraqi steeped in Islamic fanaticism, experts said.

The death of the Islamic State leader in a raid by U.S. special forces on his Syrian hideout was a devastating blow to the resurgent terrorist group, but his replacement is already waiting in the wings, experts said Thursday.

And while a successor to Abu Ibrahim al-Hashimi al-Qurayshi has yet to be revealed, he will most likely be another Iraqi steeped in both Islamic fanaticism and terror, they said.

“So far we don’t know the name of who is waiting in the wings to replace him, but you can be sure that ISIS has already designated somebody,” James Franklin Jeffrey, a former U.S. ambassador to Iraq and former special envoy on Syria, told NBC News. “The shelf-life of an ISIS leader of late is about three years, and so they are prepared for that eventuality.”

Dr. Daniel Milton, the director of research at the Combatting Terrorism Center at West Point, agreed.

“I’m not aware of a specific individual, but ISIS has experienced a number of leadership hits so they are prepared to fill the latest vacancy,” Milton said.

Whoever ISIS picks will be somebody familiar with “Islamic jurisprudence” and battlefield experience, Milton added.

“There will be a rapid succession,” he said.

But there may not be a public announcement, said Seth G. Jones, a counterterrorism expert at the Center for Strategic and International Studies.

“A lot of the leadership has been killed in the last few years,” Jones said. “Because of that, they’re being very careful.”

The top job at ISIS suddenly became open after an overnight raid on al-Qurayshi’s redoubt when the cornered leader, rather than being taken alive, detonated a suicide bomb that killed both him and several civilians, including children, President Joe Biden said.

But al-Qurayshi’s predecessor, Abu Bakr al-Baghdadi, also detonated a suicide bomb, killing himself and three of his children in 2019, when U.S. forces tracked him down.

Former President Donald Trump declared victory over ISIS in 2018, a year before al-Baghdadi was killed.

Despite Trump’s boasts, ISIS actually revived under al-Qurayshi’s leadership, the experts said. And while al-Baghdadi was, for a time, the world’s most wanted terrorist, al-Qurayshi also had a bloody résumé.

“He was known for his brutal enforcement of ISIS’s vicious ideology and was a driving force behind ISIS’s violent campaigns to subjugate communities and oppress perceived enemies, including the Yazidis, a religious minority in Iraq,” Secretary of State Antony Blinken said after the ISIS leader’s death was announced. “He coordinated the group’s global terror operations during a period in which ISIS expanded its geographic presence and attacks in Africa.”

So the death of al-Qurayshi can be seen as a major victory for the beleaguered Biden administration, the experts said.

“This is a big thing, especially coming so soon after the ISIS jailbreak and at a time when the Biden administration is dealing with the crisis in Ukraine,” said Jeffrey, who is also the chair of The Wilson Center’s Middle East Program. “This is a major blow to ISIS and an important psychological victory for the U.S. team.”

Al-Qurayshi is from the part of Iraq where ethnic Turkmen, rather than Arabs, predominate.

“Among the most ferocious Sunni extremists were the Turkmen,” Jeffrey said.

Al-Qurayshi served in the Iraqi Army and studied Sharia law at the University of Mosul before he joined Al Qaeda in Iraq, an Islamic insurgent group that eventually became ISIS.

Al-Qurayshi met al-Baghdadi while jailed in Camp Bucca, the isolated desert prison where hundreds of others Sunni insurgents, Shiite extremists and Al Qaeda in Iraq suspects were imprisoned.

There have been reports that while there al-Qurayshi turned rat and gave up the names of 88 other Islamic extremists to U.S. interrogators.

“That was done in consultation with al-Baghdadi,” Jeffrey said. “Those names were most likely Al Qaeda in Iraq members they didn’t trust and wanted to get rid of.”

Post Views: 147
Previous The Bully in the Bubble
Next Who is the shadowy Iraqi militia that attacked the UAE?