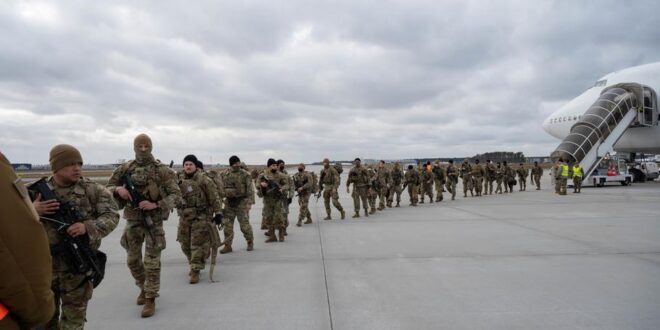 Kirby’s comments came as roughly 850 troops with the 82nd Airborne Division from Fort Bragg, N.C., arrived in Poland in response to more than 100,000 Russian troops amassed on Ukraine’s northern and eastern borders. Another 850 troops with 82nd Airborne are expected to join them in the coming days.

“[The 82nd Airborne troops] will be establishing themselves to be able to respond to multiple contingencies and to conduct whatever missions [they] are called on to do,” Kirby told reporters at the Pentagon. “One of them could very well be preparing for some sort of evacuation assistance on the Polish side of that [Ukrainian] border.”

He did not specify what that assistance would be. However, The Wall Street Journal on Wednesday reported, citing unnamed officials, some of the 82nd Airborne troops will set up checkpoints, tent camps and other facilities at the Polish border in preparation to receive Americans fleeing Ukraine.

Kirby declined to confirm the report but noted the 82nd Airborne is capable of such activities.

“They are multimission capable and they are going to be ready to do a number of contingencies, including [evacuation] … if that’s what we’re called to do,” he said.

In December, Russia began amassing its troops along its border with Ukraine, and last month started adding troops to Ukraine’s northern border with Belarus for what Russia said were exercises with that country. NATO nations, including the U.S., have expressed concern in recent weeks that the buildup could mean Russia intends to invade Ukraine, as it did in 2014 when Russia annexed the Crimean Peninsula.

The 1,700 U.S. soldiers directed to Poland are among 3,000 troops that the Pentagon announced last week it would deploy to support NATO countries near Ukraine. Also included are about 1,000 troops from an infantry Stryker squadron in Germany now on its way to Romania and 300 from the 18th Airborne Corps at Fort Bragg who are setting up a joint task force headquarters in Germany.

Kirby’s comments Wednesday could represent a shift from State Department statements last month urging Americans to leave Ukraine because the U.S. did not plan to launch an evacuation mission there.

“What we’re encouraging American citizens to do is depart [Ukraine] now,” she said.

Psaki also said Americans in Ukraine can reach out to U.S. embassies in the region for assistance.

“Obviously we have a range of diplomatic presences, not only in Ukraine, but in neighboring countries that are always available for U.S. citizens should they need assistance,” she said.

President Joe Biden on Monday urged the same, saying he’d “hate to see [American citizens in Ukraine] get caught in a crossfire if in fact [Russia] did invade.”

If Americans heed Biden’s advice, a military evacuation mission will not be necessary, Kirby said.

“There should be no need for the 82nd Airborne to have to assist with evacuation missions if Americans in Ukraine are paying close attention to the warnings and the advisories that they’ve gotten and do the right thing,” he said. “There’s time to do it.”

Psaki emphasized military evacuations are generally rare — aside from the August mission when U.S. and coalition forces evacuated nearly 130,000 U.S. citizens and Afghan allies from Afghanistan during the final weeks of the U.S. war there.

“What people should understand is that the United States does not typically do mass evacuations,” she said. “Of course, the situation in Afghanistan was unique for many reasons, including that it was the end of a 20-year war.”

That evacuation was highly criticized after hundreds of Americans were left behind, including dozens of relatives of U.S. troops. The Pentagon in November began compiling a list of family members of U.S. troops remaining in Afghanistan to share with the State Department.

The Pentagon has not announced a similar effort to establish a list of dependents in Ukraine and its surrounding countries, but the Navy on Feb. 4 posted an administrative message asking sailors and civilian employees to ensure the service knows of any of their dependents in Ukraine, Lithuania, Latvia, Poland, Belarus, Moldova, Romania, Slovakia, Hungary, Estonia or Bulgaria.

“Commanding officers shall ensure that their command’s Navy family accountability and assessment system database is current and accurate, to include phone numbers and addresses,” the message said.

Post Views: 114
Previous Strykers and soldiers from Army’s 2nd Cavalry Regiment mount up for open-ended Romania deployment
Next Iraq Is One Step Closer to Forming a New Government