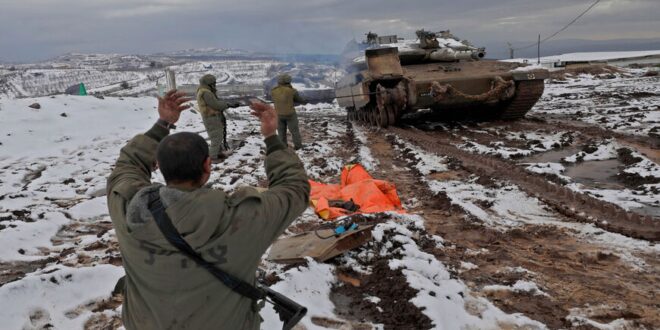 Syria’s air defense systems were activated at 1 a.m. local time on Feb. 9 (2300 GMT, Feb. 8) and Syrian state media reported that the “Israeli enemy” had allegedly carried out an aerial strike on Syria from an area northeast of Beirut. This was followed 10 minutes later by a surface-to-surface missile attack from the Golan Heights area. According to the report, the attacks were directed at targets in the Damascus suburbs, killing one soldier.

In a highly unusual response to the persistent strikes attributed to Israel in Syria, warning sirens also went off in Israel at 1:05 a.m. (2305 GMT) in the Arab-Israeli town of Umm al-Fahm and in northern Israeli West Bank settlements. Shortly thereafter, the Israeli military announced that it had identified an inbound SA-5 surface-to-air missile fired indiscriminately by Syrian air defenses. Unlike most similar instances in the past, Israel did not attempt to intercept the missile, presuming that unlike ballistic missiles that it is adept at heading off, SA-5s are harder to intercept. The missile eventually exploded in the air, with fragments and debris falling inside Israel and residents reporting explosions.

Israel does not generally claim responsibility for aerial raids on Syria designed to eliminate Iran’s entrenchment there. This time, too, Israel did not take responsibility for the initial attack. However, after the SA-5 was fired at its sovereign territory, Israel formally announced that in response to firing from Syria, it had attacked surface-to-air targets there, including a Syrian radar and batteries that had fired missiles at Israel air force fighters.

The overnight attack on Syria was the second attributed to Israel since a Jan. 24 joint Russia-Syria air patrol conducted in Syrian airspace. According to the Russian announcement at the time, Syrian and Russian pilots conducted an aerial patrol over the Golan Heights and the Euphrates River. The report also said the Russian pilots had taken off from the Khmeimim air base, while the Syrians took off from the Seikal and Dumayr airfields outside Damascus. The Russian Defense Ministry said that the patrol had flown Russia’s newest top-of-the-line Su-34 and Su-35 aircraft.

According to some reports, Israel had planned to attack targets in Syria on the very night of the patrol, but postponed the raid so as not to clash with Russian aircraft. Eight days later, Israel reportedly attacked targets in Syria once the weather permitted the delayed raid and the skies were clear of Russian fighters. On Feb. 9, as mentioned, Israel struck for the second time since the shared patrol.

Senior security officials have told Al-Monitor that the joint overflight was clearly a deliberate show of force by Moscow, adding that Israel had been closely monitoring the expanding cooperation between the Syrian and Russian militaries. Immediately following the January patrol, Israeli and Russian security officials discussed the event, with Israel trying to understand whether the operation reflected a change in Russian policy that would curtail its freedom to act against Iranian targets in Syria.

For now, it seems, Israel says it is not overly concerned by the Russian show of force. According to Israeli sources, when the Russians seek to convey a message, they do so directly rather than hinting. Previously, according to these sources, when Moscow wanted to convey a message of any sort to Israel, high-ranking Russian officers showed up at their Israeli counterparts’ offices or summoned the Israelis to theirs, and spelled out their message in no uncertain terms.

Russia’s aerial muscle flexing could, however, be linked indirectly to the tensions on its border with Ukraine. The Russian-Syrian patrol could conceivably have been designed to send a message to NATO and the United States, as well as a deterrent message to Israel lest it adopt a pro-American stand in the Ukraine border crisis.

Israel, for its part, is trying to walk a very fine line in the US-Russian tensions over Moscow’s threatened invasion of Ukraine. On the one hand, it is fully committed to its close and deep friendship with the United States, but it also needs to remain on Russia’s good side for a variety of reasons and is not keen to provoke it.

In any case, the tensions along the Ukraine border are bad news for Israel because the winds of war blowing from Europe have diverted US attention from the negotiations with Iran over its nuclear program and from tensions with China. Officials in Jerusalem are monitoring events with concern given their desire to see the powers united vis-a-vis Iran’s nuclear ambitions.

Regarding its activity in Syria, Israel has made clear time and again that it has no intention of changing policy on its campaign to uproot Iran’s entrenchment in Syria and its weapons transfers intended for Hezbollah. According to Israeli sources, as of now, despite the growing cooperation between the Syrian and Russian military forces, and notwithstanding the launch of the surface-to-air missile at the Israeli fighters jets, Israel is operating freely in Syria and means to keep doing so as long as possible.

Interviewed this morning on Israel Public Broadcasting Corporation radio station Kan, Intelligence Affairs Minister Elazar Stern said, “There will be attacks in Syria. We are doing this harming as few Syrian civilians and soldiers as possible. We do not have to coordinate with Russia every time we decide to take action.”