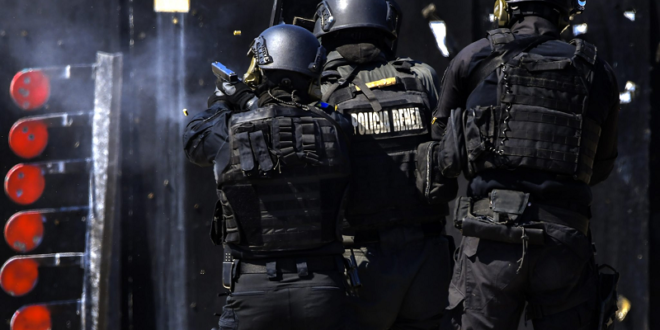 Cooperating with international agencies such as Europol is crucial if North Macedonia and the rest of the Western Balkans are to win the fight against terrorism and extremism.

On many occasions, tackling terrorism and extremism has only been possible as a joint effort between governments, institutions, and security agencies. For the Western Balkans too, intergovernmental cooperation is needed to fight these threats.

However, cooperation with international institutions and agencies can further aid those efforts.

Apart from central EU institutions like the European Commission, bodies such as the European Police Agency, Europol, are vital in the fight against terrorism and extremism.

Primarily through its European Counter-Terrorism Center, ECTC, Europol has operational and working agreements with all Western Balkan countries and regularly exchanges information on tackling such threats.

One investigation in which North Macedonia cooperated closely with Europol was the terrorist attack in Vienna in November 2020, in which four people were killed. The perpetrator, Kujtim Fejzulai had dual Austrian and North Macedonian citizenship, and authorities from both countries cooperated intensively through Europol in the aftermath of the deadly attack.

In 2021, North Macedonia also participated in the Europol-coordinated operation Shield II, which targeted trafficking of fake and misused medicines and doping substances. This operation resulted with 544 arrests and the seizure of €63 million worth of fake pharmaceuticals and illegal doping substances.

North Macedonian police provide information on a daily basis to the agency on illegal trading in drugs and weapons, terrorism, illegal migration, human trafficking, and various financial crimes, such as money laundering, cybercrime, or financial frauds.

According to the European Commission’s latest report on North Macedonia, there is “good and regular exchange of information” with Europol.

Rapid exchange of information is crucial

For countries such as North Macedonia, rapid exchanges of information with international agencies can greatly assist ongoing and potential investigations, and prevent repeats of deadly attacks such as the one in Vienna.

“Besides having the status of an operational partner with EUROPOL, in the field of counter-terrorism we have established mechanisms and protocols for rapid exchange of information that function at a high level and significantly contribute to the fight against terrorism,” North Macedonia’s Ministry of Interior told BIRN.

Europol’s Terrorists Identification Task Force was established at the end of 2019 and holds regular meetings with member states and operational partners such as North Macedonia.

“This taskforce is organized by Europol every few months. EU Member States and operational partners with which Europol has an agreement are then invited to join action weeks focusing on a specific threat, such jihadi terrorism or far-right extremism,” Claire Georges, deputy spokesperson for Europol, told BIRN.

North Macedonia isn’t directly involved in the taskforce but can use resources and information to aid its efforts in combating terrorism, the Interior Ministry explains.

“Through the established mechanisms, as an operational partner, we can use the resources and information that would be of our interest in the fight against terrorism, which is certainly a global challenge.” the Interior Ministry added.

“The work of this Taskforce is supported by Europol’s European Counter Terrorism Centre, where close to a hundred staff members support EU Member States in their investigations against terrorism,” Georges explained.

In some cases, there can be flaws. International organizations and institutions don’t always make the correct assessment of possible threats in the field, which can afterward prove costly.

One is the growing threat of Right and Left extremism and how it is perceived in North Macedonia.

“When it comes to international organisations in the region, from what I have seen the topic in past decade, there is very little attention paid to Right and Left radical extremism,” Michal Vit, assistant professor in international relations at the Metropolitan University in Prague, told BIRN.

“What’s lacking is the ability to see the connection between organised crime and radical Right/Left, even though there has been a lot of evidence leaning towards this direction, as well as investigative stories published on the topic,” he said.

Currently based in Skopje, Vit says that such threats are often perceived as much lower than they are.

“This connection seems to be a kind of sensitive, thus the interest from international organisations is generally low when compared to gender-based violence, for example,” Vit explained.

Investigations and prosecutions could be better

Regional and international law enforcement cooperation can prove highly beneficial for countries in the long run.

A study by Eurothink, a Skopje-based foreign policy and security think-tank, says that when it comes to the response to terrorism, North Macedonia is moderately ready in terms of European legislation and standards.

Cooperation such as with Europol suggests that room exists for improvement in investigations and prosecutions of terrorism, especially terrorist financing, the study said.

North Macedonia’s Interior Ministry says direct communication and information sharing with other Europol members and partner countries have been one of the most significant benefits so far.

“In particular, in the fight against terrorism, direct communication and exchange of information have been established at the operational level between the OSCE/ODIHR – Sector for Combating Violent Extremism and Radicalism with all relevant counter-terrorism units of all Europol member and partner countries.

“For us, this has been an exceptionally positive experience with all of this,” the ministry concluded.