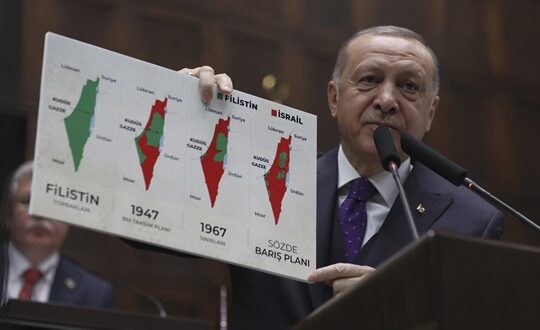 Recent signs of a thaw in ties between Israel and Turkey after a decade of frosty relations are yet another reflection of how the Middle East’s changing regional order is not only leading to the emergence of new relationships, but also to adjustments in old ones. The thaw is in part the result of a regional realignment that has left Ankara more isolated, but it is also being driven by Israel’s shifting priorities and Turkey’s urgent economic and political challenges.

While Israel and Turkey are publicly moving in the right direction, the new reality—which has made this relationship more important to Turkey than to Israel—renders the durability of any rapprochement more dependent on President Recep Tayyip Erdogan’s calculations than on an Israeli desire to mend ties with its oldest Muslim-majority diplomatic interlocutor.

Despite a number of attempts, the bilateral relationship has never recovered from the fallout of the 2010 Mavi Marmara incident, when Israeli soldiers boarded ships of a Turkish civilian flotilla as it attempted to break Israel’s blockade of the Hamas-controlled Gaza, killing nine activists on board. A conciliatory call in 2013 between then-Israeli Prime Minister Benjamin Netanyahu and Erdogan—famously made from the airport tarmac under the watchful eye of then-U.S. President Barack Obama—as well as a 2016 reconciliation agreement amounted to false starts.

But the recent elevation of a new group of Israeli leaders seems to be contributing to a changing dynamic in which a genuine reset is possible. When Yitzhak Herzog assumed the Israeli presidency in July, Erdogan called him to offer congratulations, and the two have spoken an additional three times since then. Erdogan also announced last month that he had invited Herzog to visit Turkey, and preparations for a presidential visit are in the works. To be sure, the Erdogan-Herzog relationship can only go so far in bridging longstanding policy divides given the ceremonial role of the Israeli presidency, but other signals that both sides are attempting to move beyond the past decade of tensions abound.

By resuming engagement with Turkey, Israel is seeking to change Turkish behavior, in particular to transform it from causing headaches for Israel to solving problems. Israeli frustration with Turkish support for Hamas, from hosting the group’s members in Istanbul and Ankara to providing financial support, has long been a point of contention. By dangling the possibility of better relations and increased economic cooperation, Israel hopes to end the Turkish lifeline for the terrorist group. Turkey has also supported the militant northern branch of the Islamic Movement in Israel and is viewed by Israel as being behind attempts to sow chaos in Jerusalem around the Temple Mount. Israeli officials are amenable to testing the proposition that a better relationship with Ankara will lead to the end of Turkish support for these and other recalcitrant actors.

But while Israel is willing to test the waters with Turkey, the real momentum is coming from the Turkish side. In the decade since the rupture with Israel, Turkey’s geopolitical fortunes and Erdogan’s personal political fortunes have suffered a downturn. Whereas top presidential adviser Ibrahim Kalin once spoke in 2013 of Turkey’s “precious loneliness,” by which he meant that Turkish foreign policy would be proven in time to be correct despite its iconoclasm, the thrust of Turkish foreign policy over the past year has been an acknowledgment that loneliness is perhaps less precious than Ankara once perceived. Turkey’s relations with the United States and the European Union over the past half-decade have lurched from crisis to crisis, whether it be over Turkey’s purchase of Russian air defense systems that resulted in its expulsion from the U.S.-led F-35 next-generation fighter jet program, its extortionate diplomacy with Brussels on refugee flows, or its naval maneuvers in the Eastern Mediterranean.

Turkey sees Israel as a potential bridge to better relations with these various parties. Much of the motivation behind the Abraham Accords, which normalized Israel’s relations with the United Arab Emirates and Bahrain in 2020, was a conviction that the road to Washington goes through Jerusalem, and Ankara is not immune to similar thinking. Israel also enjoys strong relations with the EU, and particularly with Greece and Cyprus, the two states that are most suspicious of Turkish motives and actions. Erdogan hopes that improved relations with Israel will help Turkey get back in the good graces of the U.S. and Europe, and that Israeli willingness to put in a good word for Ankara is worth any concessions that Turkey might make in the bilateral relationship.

Turkey has also increasingly found itself on the wrong side of the regional divide among the Middle East’s competing powers. Its early and enthusiastic support for Muslim Brotherhood-aligned protest movementsduring the Arab uprisings led to a clear rupture with status quo Arab states such as Saudi Arabia, Egypt and the UAE, and the failure of these protest movements to win power, or hold onto it where they did, left Turkey isolated and without any newly victorious political allies.

The Abraham Accords further contributed to this dynamic, serving as a repudiation of Turkey’s high-profile break with Israel over Palestinian issues and a reflection that the region was moving in a different direction. They also reinforced the fact that Israel is no longer dependent on Turkey as a much-needed source of diplomatic ties among Muslim-majority countries or as a security partner. Erdogan does not want Turkey to be left behind while the rest of the Middle East moves forward, particularly after viewing the way in which the new normalizers have been celebrated and embraced in many quarters as bold innovators, despite Turkey having normalized relations with Israel in 1949.

As pressingly, Turkey’s dire economic straits have left it searching abroad for help. Erdogan’s obsession with keeping interest rates low in the face of a plummeting lira has left the country even more dependent on foreign investment and foreign currency swaps in order to keep its economy afloat. And the history of bilateral trade with Israel and Israeli tourism to Turkey add to the economic case for improving relations. In addition, the withdrawal of U.S. support for the proposed EastMed pipeline project—which would bring Israeli natural gas to Greece via a pipeline through Cyprus—gave Erdogan an opening to attempt to revive dormant proposals for an Israel-Turkey pipeline. While the prospects for such a natural gas pipeline are extremely dim, even broaching the topic requires a reversal of Turkish rhetorical animosity toward Israel.

Whether this thaw will turn into a genuine defrost depends on how far Erdogan is willing to go, and whether he concludes that revived diplomatic and economic relations with Israel will be more politically beneficial as the 2023 Turkish elections get closer than playing the nationalist card against Israel that he has resorted to in the past. The logic for Turkey of improved relations with Israel is sound, and the Israeli government is cautiously optimistic that the relationship can be rebuilt. But Erdogan’s track record attests to a willingness to adopt a more populist and nationalist posture, particularly for electoral purposes. For Erdogan, then, there may be a difficult tradeoff to make between Turkey’s national interests and his own political fortunes.

Post Views: 163
Previous A Rival of America’s Making?
Next Special Ops Are Better Than Drones for Counterterror Missions