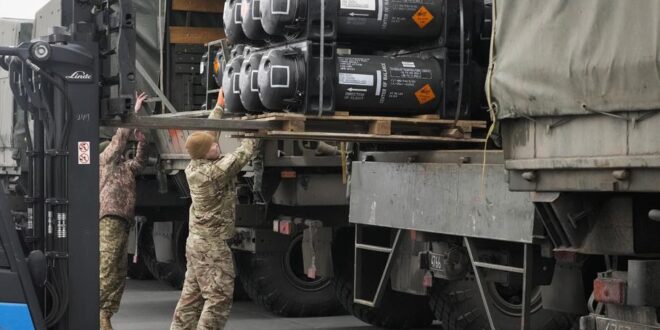 The U.S. State Department began evacuating staffers from the U.S. Embassy in Kyiv Saturday, amid mounting warnings that Moscow could imminently launch an invasion of Ukraine, according to a security update emailed to U.S. citizens in the country.

“U. S. citizens should not travel to Ukraine, and those in Ukraine should depart immediately using commercial or other privately available transportation options,” the advisory said.

Russia has pushed back fiercely against the stark warnings by the Biden administration that Moscow is on the verge of attack, accusing the West of hysteria and spreading disinformation even as Russian forces continue to hold major exercises near Kyiv’s borders.

However, Russia confirmed media reports Saturday that it was pulling its own diplomatic staff from Ukraine, citing “possible provocations by the Kyiv regime and third countries.” Russian Foreign Ministry Spokesperson Maria Vladimirovna Zakharova said the move was in response to the growing list of other governments deciding to draw down their diplomatic corps.

“We conclude that our American and British colleagues apparently know about some military actions being prepared in Ukraine,” she said, according to a statement by the ministry.

White House national security adviser Jake Sullivan cautioned Friday that there is a “very distinct possibility” that Russia will invade Ukraine in a “reasonably swift time frame” and urged all U.S. citizens there to leave immediately. Sullivan could not confirm that Russian President Vladimir Putin had made a final decision to attack, but he said that military action could begin “any day.”

The U.S. Embassy said consular services would be suspended in Kyiv from Saturday, but it would maintain a small number of staff at the consulate in Lviv in far western Ukraine to handle emergencies. U.S. citizens needing passport or visa assistance should apply to embassies in neighboring countries, it added.

The families of U.S. diplomats in the Ukrainian capital were told to leave earlier this year.

A junior British defense minister said Saturday that U.K. military trainers in Ukraine would leave over the weekend. “There will be no British troops in Ukraine if there is any conflict with Russia,” James Heappey told Sky News.

Sullivan’s warning of a possible imminent invasion echoed those issued overnight Thursday by President Biden and Secretary of State Antony Blinken. Sullivan said a Russian attack would be “likely to begin” with aerial bombing and missile strikes, and “no one would be able to count on air or rail or road departures.”

The Kremlin has massed some 130,000 heavily armed troops around Ukraine, from which it annexed Crimea in 2014. Moscow is also carrying out naval exercises near the southern coastline of mainland Ukraine, as well as a major training operation in Belarus — in striking distance of Kyiv — that analysts caution could be a precursor to an invasion.

Russia has denied it plans to attack Ukraine, an increasingly pro-Western former Soviet republic that Putin considers part of his sphere of influence. “The hysteria of the White House is more revealing than ever. The Anglo-Saxons need a war. At any price,” Zakharova wrote on Telegram.

“Our troops are still on our territory and I wonder if the US will invade #Ukraine itself — someone has to, after such a panic campaign,” tweeted Russian Deputy United Nations Ambassador Dmitry Polyanskiy in response to Sullivan’s briefing.

Ukrainian President Volodymyr Zelensky met Friday with his National Security and Defense Council to review military and diplomatic readiness. His government, which had tried to tamp down predictions of an imminent attack, sought to reassure citizens that Ukraine “remains stable and ready for various scenarios of events,” according to a statement from the Ministry of Foreign Affairs.

“At present, it is critically important to remain calm, to consolidate within the country, and to avoid actions that undermine stability and sow panic,” the ministry said.

The U.S. assessment that Putin is likely to launch an attack is based partly on new intelligence that Russia is planning to conduct a false-flag operation to create a pretext for invading Ukraine, according to multiple officials who spoke on the condition of anonymity to discuss administration deliberations.

The precise date and nature of the alleged Russian operation was unclear. U.S. officials had earlier accused Russia of planning to stage and film a fake attack by Ukrainian military forces on Russia as a pretext for invasion.

Biden and Putin will speak on the phone late Saturday morning at the White House’s request. Biden also held a video call Friday with the leaders of Western allies, including German Chancellor Olaf Scholz, British Prime Minister Boris Johnson and French President Emmanuel Macron. The officials said they were committed to diplomacy, but warned of “massive consequences and severe economic costs” that would be imposed on Russia in event of an attack, according to a White House readout.

Germany on Saturday joined a growing list of governments urging their citizens to get out of Ukraine as soon as possible. Britain, Latvia, Norway, the Netherlands, South Korea and Japan and others have issued similar advisories in recent days. Israel says it will begin to evacuate the families of diplomatic staff based in Ukraine. The executive arm of the European Union has not moved its staff though it is monitoring for escalation, Reuters reported Friday.

Diplomatic efforts remained at an impasse. Russian Defense Minister Sergei Shoigu said after a Friday meeting in Moscow with his British counterpart, Ben Wallace, that the level of cooperation between Russia and the West “is close to zero and about to cross the zero meridian and go into negative,” according to media reports.

Moscow has demanded that Ukraine be permanently barred from joining NATO and that the Western defense alliance withdraws its military presence from Eastern Europe. NATO has refused to budge on its open door policy, though Washington has offered to negotiate on issues the Kremlin considers of “secondary” importance.

Germany’s Scholz, who heads to Moscow Tuesday, is the next Western leader slated to meet Putin in person. His Vice Chancellor Robert Habeck, whose Green party is more skeptical of Moscow than Scholz’s Social Democrats, suggested Friday that the approval of the Nord Stream 2 energy pipeline between Russia and Germany could be contingent on the Kremlin holding its troops back.

Tension along Ukraine’s borders continued to be high, with Russia about to kick off the third day of military exercises in Belarus, the largest it has ever conducted in the Kremlin-allied state to Ukraine’s north.

The Russian buildup has drawn European nations closer to the United States. U.S. officials confirmed Friday that an additional 3,000 troops from the 82nd Airborne Division would be sent to Poland, adding to the 1,700 troops already dispatched to that country. And Finland, a non-NATO member that has close ties with both Russia and the alliance, announced Friday that it was purchasing military assets from the United States.

As the threat of a military conflict looms large over Kyiv, the desire for peace was expressed by Ukrainians as far away as Beijing. Skeleton racer Vladyslav Heraskevych held up a sign that read “No War in Ukraine” after crossing the finish line Friday, the first major political statement made during the Winter Games.

Post Views: 127
Previous US F-22 fighter jets arrive in UAE after Houthi attacks
Next America’s Real Adversaries are Its European and Other Allies