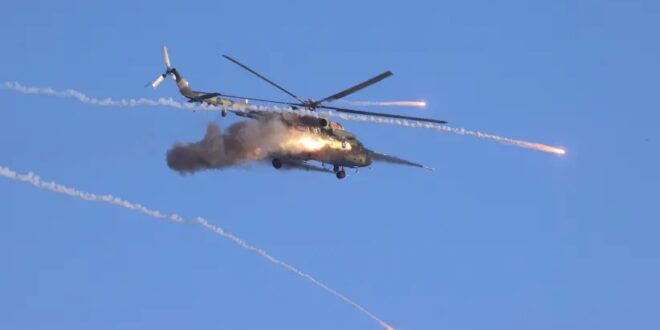 While Russia may receive some tough words and even sanctions, world nations are getting out of Ukraine as fast as possible.

The unfolding Ukraine crisis illustrates how major Western governments are dealing with the chances for a conflict between a near-peer rival of the United States and another large country. In this sense, it paints a picture of how future conflicts may unfold.

How the Ukraine crisis is resolved is only one aspect of this. If Russia does invade Ukraine, and if the West does then back Ukraine, it could lead to an escalating conflict. The outcome of that conflict matters. But it also matters if Russia gets a swift victory or if nothing happens.

This matters to the Middle East. The outcome of the Ukraine crisis could signal to Iran that it can encourage more proxy attacks in the region. A sense of global impunity to invasions and attacks, and a perception the US-led world order has fractured, could help enemies of Israel.

The China-Russia-Iran-Turkey authoritarian alliance that often works together to challenge the US and Western interests is part of an emerging new world order. This order emerged largely to challenge US global hegemony of the 1990s. It is symbolized by meetings in various forums, such as Astana process on the Syrian civil war and the Shanghai Cooperation Organization.

The West’s response to the Ukraine crisis has largely been one of putting out statements, sending some weapons and then removing embassy staff. The messaging is clear: While Russia may receive some tough words and even sanctions, the US and others are rapidly folding up their diplomatic posts in Kyiv and moving personnel to Poland or elsewhere.

This appears to give a kind of green light to a further crisis. It doesn’t exactly instill confidence to see all the foreign diplomatic staff fleeing for the exits. In a sense, it acknowledges a fait accompli, as if the invasion has already happened.
Has Russia won without actually having to do anything?

There is compelling evidence that Moscow has been able to outmaneuver the US and NATO already.

Russia has shown that pressure in the form of a troop buildup can cause panic in Western chanceries and prompt Western leaders to either phone Moscow or run around in circles discussing what to do next.

While the US and UK have appeared quite strong on the need to defend Ukraine, their NATO allies haven’t done much. Countries that were formerly in the Soviet orbit or close to the Russian border, such as Poland and the Baltics, are standing strong on these issues, but it’s not clear what countries such as Spain or Italy will do.

This lets us get a glimpse of what comes next. It’s increasingly clear that the “rules-based international order,” the one that made up the so-called “new world order” of the post-Gulf War status, is largely in tatters.

US president George H.W. Bush believed that at the end of the Cold War the US could anchor this order. However, incidents such as the Black Hawk Down incident in Somalia and the fiascoes that took place after the Iraq invasion, and then the collapse of Afghanistan, largely showed that the US can’t really enforce a world order, let alone win a war on terrorism. This means the US moved from humanitarian intervention and “global policeman” in the 1990s to narrowly focused counterterrorism operations.

Along the way, many countries leapt at the opportunity to take advantage of US bungling in places such as Afghanistan and the American public’s penchant for wanting to end “endless wars.” These countries, including Russia and China, have become more powerful.

Russia has already shown it can enforce its rules in the Caucasus and also has sent forces to Syria. It has meddled in Libya and Africa, and it is increasingly selling its weapons across the Middle East and Africa.

Meanwhile, the US is largely beset by domestic squabbles, and polling on backing Ukraine in the US shows that Americans are divided. They don’t really want involvement in another foreign war. Russia can read the polls too.

This means the Ukraine crisis could serve as a turning point, at least symbolically, of how the world order is changing. However, it could also serve to show that Russian threats and even an invasion won’t go as Moscow planned.

If Russia fumbles, then this could fuel the US desire to move to near-peer rivalry, and it could fuel massive defense spending for new systems and platforms to confront Moscow. That could lead to the US seemingly awakening from a slumber of domestic chaos and pandemic-induced malaise.

This matters for the Middle East. The US is a key partner of countries in the region and an ally of Israel and others. The US, however, has wanted to withdraw from the region and reduce its footprint. Whenever the US signals withdrawal, this unleashes chaos and also invites Iran and others into the region.

These are usually outcomes that can harm Israel because Iran leads proxies that are anti-Israel. Iranian proxies also target Israel’s new peace partners in the Gulf. Thus, the Ukraine crisis could have ramifications that affect Israel.

Russia is not necessarily the major problem, and it generally gets along with Israel. China has also had trade with Israel. But there are major questions about how it might fuel Iranian aggression in the region. If Russia is seen to have gotten a green light for an invasion, then Iran may think it can increase its attacks.

Post Views: 92
Previous German troops arrive to reinforce Baltics amid tensions over Ukraine
Next Lone soldiers from Ukraine not in a hurry to bring their families