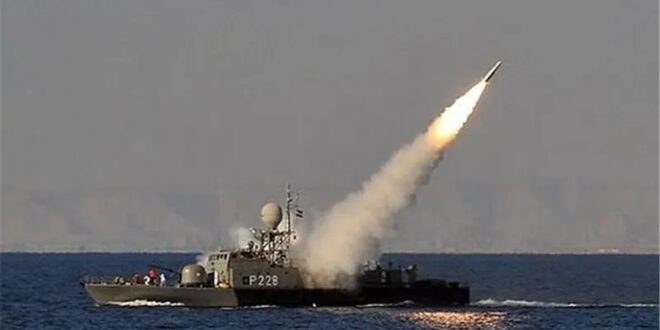 Following Russia’s troop build-up along Ukraine’s borders portending imminent invasion, Houthi rebels in Yemen backed by Iran, which is Russia’s most dependable regional ally in the decade-long Syrian conflict, have significantly escalated missile strikes on the oil-rich Gulf States with a nod of approval from the Kremlin in order to take pressure off Russia in the Ukraine stand-off by opening a second front in the veritable Achilles’ heel of the energy-dependent industrialized world.

To buttress the defenses in the Gulf, US F-22 fighter jets arrived in the United Arab Emirates (UAE) on Saturday, Feb. 12, as part of an American defense response to recent missile attacks by Yemen’s Houthi rebels targeting the country. The Raptors landed at Al-Dhafra Air Base in Abu Dhabi, which hosts 2,000 US troops. American soldiers there launched Patriot interceptor missiles and briefly had to take shelter after the missiles exploded in the airspace above the military base last month.

The deployment came after the Houthi rebels launched three attacks targeting Abu Dhabi last month, including one targeting a fuel depot that killed three people and wounded six. The attacks coincided with visits by presidents from South Korea and Israel to the UAE. Though overshadowed by the Ukraine crisis, the missile strikes targeting the Emirates has sparked a major US response. The American military has sent the USS Cole on a mission to Abu Dhabi.

To return the favor of opening a second front in the Gulf and acknowledging Russia’s steadfast strategic alliance with Iran in the region, the Kremlin issued rare condemnation [1] of recent Israeli airstrikes in Syria as “crude violation” of Syria’s sovereignty on Thursday, Feb. 10, that up until now were tacitly tolerated by the Russian forces based in Syria’s Tartus naval base and Khmeimim airbase southeast of Latakia, and also pledged last month that the Russian Air Force would conduct joint air patrols alongside the Syrian Air Force that would pre-empt the likelihood of further Israeli airstrikes in the future.

“Israel’s continuing strikes against targets inside Syria cause deep concern,” Russian Foreign Ministry spokeswoman Maria Zakharova said. “They are a crude violation of Syria’s sovereignty and may trigger a sharp escalation of tensions. Also, such actions pose serious risks to international passenger flights.”

Although Israel claims its air campaign in Syria is meant to target Iran-backed militias, the airstrikes often kill Syrian soldiers. Syrian state media said one soldier was killed and five more were wounded in the latest Israeli attack at Damascus, which occurred Wednesday, Feb. 9.

Russia has held talks with Israel on Syria, and said last month it would begin joint air patrols with Syria. The patrols will include areas near the Golan Heights in southern Syria bordering Israel, a frequent site of the Israeli airstrikes, and Israel is said to be considering discontinuing the strikes altogether or slowing them down significantly.

The Times of Israel noted that this marked a momentous change in policy for Russia: “Following the patrol, Ynet reported that Israeli military officials were holding talks with Russian army officers to calm tensions.”

The report added, “Israeli officials were struggling to understand why Russia, which announced that such joint patrols were expected to be a regular occurrence moving forward, had apparently changed its policy toward Israel.” The report claimed that Israel might limit its air campaign in Syria as a result of Russia’s “mystifying” change in the Syria policy.

Over the years, Israel has not only provided material support to militant groups battling Damascus – particularly to various factions of the Free Syria Army (FSA) and al-Qaeda’s Syrian affiliate al-Nusra Front in Daraa and Quneitra bordering the Israel-occupied Golan Heights – but Israel’s air force has virtually played the role of the air force of the terrorists and mounted hundreds of airstrikes in Syria during the decade-long conflict.

In an interview to New York Times [2] in January 2019, Israel’s former Chief of Staff Lt. General Gadi Eisenkot confessed that the Netanyahu government approved his recommendations in January 2017 to step up airstrikes in Syria. Consequently, more than 200 Israeli airstrikes were launched on the Syrian targets in 2017 and 2018, as revealed [3] by the Israeli Intelligence Minister Israel Katz in September 2018.

In 2018 alone, Israel’s air force dropped 2,000 bombs in Syria. The purported rationale of the Israeli airstrikes in Syria has been to degrade Iran’s guided missile technology provided to Damascus and its Lebanon-based proxy, Hezbollah, which poses an existential threat to Israel’s regional security.

Nevertheless, Israeli military strategists’ “concerns” aside, it’s worth recalling that a joint American-Israeli program [4], involving a series of short-of-war clandestine strikes, aimed at taking out the most prominent generals of the Islamic Revolutionary Guards Corps (IRGC) and targeting Iran’s power stations, industrial infrastructure, and missile and nuclear facilities has been going on since early 2020 after the commander of IRGC’s Quds Force General Qassem Soleimani was assassinated in an American airstrike at the Baghdad airport on January 3, 2020.

As the US presidential race heated up in the election year, the pace and sophistication of the subversive attacks in Iran picked up simultaneously. In the summer of 2020, “mysterious explosions” were reported at a missile and explosives storage facility at Parchin military base on June 26, at power stations in the cities of Shiraz and Ahvaz, a “mysterious fire” at Bushehr port on July 15 destroying seven ships, and a massive explosion at the Natanz nuclear site on July 2, 2020 that reportedly set back Iran’s nuclear program by at least two years.

Besides wooing the Zionist lobbies in the run-up to the US presidential election, another purpose of the subversive attacks appeared to be to avenge a string of audacious attacks mounted by the Iran-backed forces against the US strategic interests in the Persian Gulf that brought the US and Iran to the brink of a full-scale war in September 2019.

In addition to planting limpet mines on oil tankers off the coast of UAE in May 2019 and the subsequent downing of the American Global Hawk surveillance drone in the Persian Gulf by Iran, the brazen attack on the Abqaiq petroleum facility and the Khurais oil field in the Eastern Province of Saudi Arabia on September 14, 2019, was the third major attack in the Persian Gulf against the assets of Washington and its regional allies.

That the UAE had the forewarning of the imminent attacks was proved by the fact that weeks before the attacks, it recalled forces from Yemen battling the Houthi rebels and redeployed them to defend the UAE’s territorial borders.

The September 14, 2019, attack on the Abqaiq petroleum facility in eastern Saudi Arabia was an apocalypse for the global oil industry because it processed five million barrels crude oil per day, almost half of Saudi Arabia’s total oil production.

The subversive attack sent jitters across the global markets and the oil price surged 15%, the largest spike witnessed in three decades since the First Gulf War after Saddam Hussein invaded Kuwait in 1990, though the oil price was eased within weeks after industrialized nations released their strategic oil reserves.

It bears mentioning that alongside deploying several thousand American troops, additional aircraft squadrons and Patriot missile batteries in Saudi Arabia in the aftermath of the Abqaiq attack, several interventionist hawks in Washington invoked the Carter Doctrine of 1980 as a ground for mounting retaliatory strikes against Iran, which states:

“Let our position be absolutely clear: an attempt by any outside force to gain control of the Persian Gulf region will be regarded as an assault on the vital interests of the United States of America, and such an assault will be repelled by any means necessary, including military force.”

Although the Houthi rebels based in Yemen claimed the responsibility for the September 2019 complex attack involving drones and cruise missiles on the Abqaiq petroleum facility and the Khurais oil field in the Eastern Province of Saudi Arabia, Washington dismissed the possibility. Instead, it accused Tehran of mounting the complex attack from Iran’s territory.

Nevertheless, puerile pranks like planting limpet mines on oil tankers and downing a $200-million surveillance aircraft can be overlooked but the major provocation of mounting a drone and missile attack on the Abqaiq petroleum facility that crippled its oil-processing functions for weeks was nothing short of showing red rag to the bull.

Unless Iran got the green light to go ahead with the attacks from a major military power that equals Washington’s firepower, such confrontation would have amounted to a suicidal approach.

Considering such a co-ordinated escalation in the Gulf by Iran and Russia, it seems a forgone conclusion that if Kremlin decided to invade Ukraine, Iran, too, would mobilize its forces in the critically important volatile region to disrupt the global oil supply and put pressure on the energy-dependent industrialized powers to carefully consider their retaliatory measures against the Russia-Iran military alliance.

In fact, this was the precise message conveyed to Washington’s military strategists by the last month’s audacious Houthi attacks on targets in UAE, specifically the one targeting al-Dhafra airbase hosting US forces.

Regardless, the acts of subversion in the Persian Gulf in 2019 culminating in the “sacrilegious assault” on the veritable mecca of the oil production industry in Sept. 2019 should be viewed in the broader backdrop of the New Cold War that has begun following the Ukraine crisis in 2014 after Russia occupied the Crimean peninsula and Washington imposed sanctions on the Kremlin.

In addition, Russia’s membership in the G8 forum was suspended by the Western powers in March 2014 and Russian President Vladimir Putin was snubbed at international summits by the Western leaders, by then-President Obama in particular, an insult that the Russian strongman took rather personally.

The Kremlin’s immediate response to the escalation by Washington was that it jumped into the fray in Syria in September 2015, after a clandestine visit to Moscow by General Qassem Soleimani, the slain commander of the IRGC’s Quds Force.

When Russia deployed its forces and military hardware to Syria in September 2015, the militant proxies of Washington and its regional clients were on the verge of drawing a wedge between Damascus and the Alawite heartland of coastal Latakia, which could have led to the imminent downfall of the Bashar al-Assad government.

With the help of the Russian air power, the Syrian government has since reclaimed most of Syria’s territory from the insurgents, excluding Idlib in the northwest occupied by the Turkish-backed militants and Deir al-Zor and the Kurdish-held areas in the east, thus inflicting a humiliating defeat on Washington and its regional allies.

Finally, a word about the venerated commander of IRGC’s Quds Force General Qassem Soleimani who was assassinated in an American airstrike on a tip-off from the Israeli intelligence at the Baghdad airport on January 3, 2020. Soleimani was the most trusted aide of Iran’s Supreme Leader Ayatollah Khamenei and his main liaison for holding consultations with Russia.

Not only did he convince Kremlin with his diplomatic skills to strike at Washington’s vulnerability in the Syrian conflict but he was also the chief architect of the audacious September 2019 attacks at the Abqaiq petroleum facility and the Khurais oil field in the oil-rich Eastern Province of Saudi Arabia.

Reportedly, Trump initially rejected [5] the Pentagon’s option to assassinate General Soleimani on December 28, 2019, due to apprehensions over full-scale confrontation with Iran, and authorized airstrikes on Iran-backed militia groups in Iraq instead.

Post Views: 150
Previous The Similarities Between ESG And Fascism Are Scary
Next Undemocratic Goals Of The Summit For Democracy 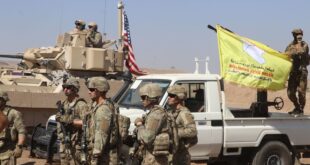